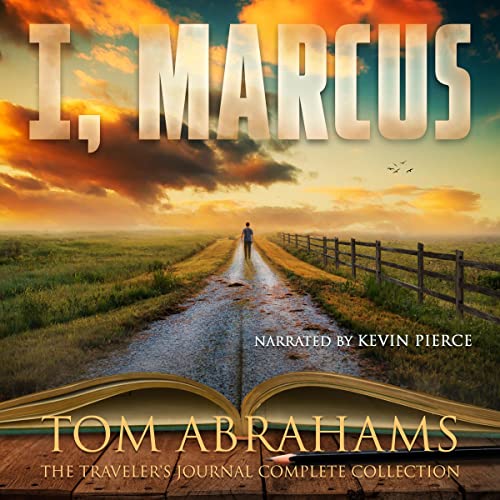 He came. He saw. He conquered.

The Scourge killed two-thirds of the world's population and gave rise to a singular post-apocalyptic hero.

Now, for the first time, experience The Traveler series through the words of the saga's protagonist, Marcus Battle.

Told from his perspective, and digitally transcribed from his personal collection of journals, these texts give new insight into his actions, his humor, his regrets, and his faith.

The journals contain never-before-read stories of survival as Battle navigated the lonely landscape of a post-Scourge world and a fresh take on the highlights of the eight novel series that enthralled preparedness and survivalist fans across the globe.

It is perfect for listeners of Franklin Horton, Kyla Stone, Jack Hunt, and Nicholas Sansbury Smith.

Not too good so far

Not sure who the people are that reviewed this initially and gave it 5 stars, but so far I am not impressed. Nothing like the series. Not even allowed to return it one day later. Be careful what you waste your credit on. Definitely skip this and wild lands by sansbury smith.

After this book, I have added Tom Abrahams to my must read list of authors.

one of the best series I have listened to in a long time......fantastic narration

I LOVE this world, and I’m always happy to dive back into it. This collection of journal entries is fascinating. Giving us some more insight into the mind and actions of Marcus Battle right as the Scourge hits the United States and the World.

It opens with the burial of his wife and child, goes into the first person he had to kill, and just sets the scene for what would become the Traveler series. A series that I absolutely loved and one I can’t believe I get to jump back into.

I started this on a work flight to NYC, and it’s crazy to me just how quickly Abrahams was able to suck me right back into the world of Marcus Battle. The other thing I caught was how often I’d end up pausing this book to highlight lines from it. Abrahams (and Battle) have so many quotable or memorable lines that I had to use Kindle Unlimited to borrow them just to save them for future reference.

Here’s just one example: “Though my guess is, you found this long after I am gone, because there is no way you got here by going through me.” – I mean, chills. Battle is one of those formidable characters that you can genuinely imagine saying something like this. Also, Abrahams cracks a few jokes about audiobooks, narrators, and “how much Battle sounds like the narrator Kevin Pierce”. I know those were little hat tips to us audiobook readers and to Kevin for narrating the entire series. But the respect shown there will not be forgotten.

Basically, every time I read a book by Abrahams, my reviews go long, but there is so much to love. He’s able to create these incredible characters, situations, and storylines that I feel I need to respect him by writing a long-winded review.

That being said, I’m going to finish here since this review could be summarized as “holy crap, I loved this” because I did from beginning to end.

I hope this isn't the last we'll hear of Marcus Battle, loved every minute

Marcus Battle's Story Should Be A Movie

Kevin Pierce's narration has become a much welcomed link to intelligent, creative storytellers with an exceptional apocalyptic edge. While other narrators like Scott Brick and authors who narrate their own works are also enjoyable, there's something wise, grandfatherly and ultimately comforting about listening to Pierce. It's like a delicious, hearty soup coupled with just the right cup of tea and soft blanket on an ice cold day...warming, pleasurable and nourishing. Yes, lol, I know what I just said is "corny" but it's also true. I'd willingly listen to Pierce read the alphabet.🤪

Tom Abrahams is an incredible author. His attention to details is excellent without being fru-fru. Prepping tips abound and he knows just how to keep his audience hungry for new material. Soooo glad he gave us more Marcus Battle. Would love to see Battle make "cameos" in new books, even if just as chapter opening quotes like "some folks just need killing" or "as far as the East is from the West". Better yet, some enterprising studio should make this series into a movie...but only if Abrahams has script approval and an older actor like Liam Neeson or Clint Eastwood portray him. Clint's son could easily portray "young Battle". Funny, at least 5 storylines I've made this particular comment about have become #1 cable shows... guaranteed this would be too!😁

Oh My Gosh can't believe we were able to hear something new about Marcus battle I never thought this could ever happen. this is so cool to get a point of view of Marcus battle himself and to hear his journal of what he went through all the books we listen to originally we get to hear what his thoughts are as we listen to this story his journal it's all the books we were originally read and his thoughts as he's going through them it's so cool this is amazing Tom Abrahams is a brilliant man thank you for this!!! and Kevin Pierce gives an outstanding performance what a wonderful narrator he is my favorite narrator I literally have every book every genre of books that he has ever read. the reason I have gotten into true crime books as well is because of Kevin Pierce. check out his other series he has done you won't regret it.

Tom Abrahams' series ‘The Traveler’ and ‘The Scourge’ had been sitting in my library for some time when I saw ‘I, Marcus’ release on audio, it inspired me to listen to all the other books associated with it–which I’ve spent the last couple of weeks doing.

Part of the fun of the post-apocalyptic genre, for me, is the over-the-top superhuman hero. Abrahams' Marcus Battle is this and more. He is not infallible. He is flawed. Losing his family has made him maybe somewhat impetuous and probably not a little crazy. I love him, implausibilities and all.

This book switches the 3rd-person POV of the previous books to 1st-person diary writer. It’s also written as if a future historian is using it as a record of the long-passed Days of the Scourge. There are numerous wonderful fill-in-the-blank background scenes featuring Sylvia and Wesson. My favorite element of the book is a large plot involving the town of Rising Star. There is a substantial twist, that Abrahams unfolds, in which readers don’t understand the full impact until near the end. No spoilers, you’ll know it when it happens.

And, as an added bonus. Abrahams includes a few Easter Egg-type references to The Traveler and The Scourge. Those are a fun addition. Be sure to read those first so you can catch them too.

Well, as everyone who listens to post-apocalyptic fiction knows, Kevin Pierce is the preeminent narrator. I love his reading style. I have literally listened, back-to-back, to several books he’s narrated without growing tired of his performance.

I loved the journal format of the Traveler series, the books were my first audio books and having it presented from Marrcus' point of view just brought it all together. Looks like I might have to read them all again. This really is a wonderful series in all it's forms. Thank you Mr. Abraham's for giving us a hero named Marcus Battle.