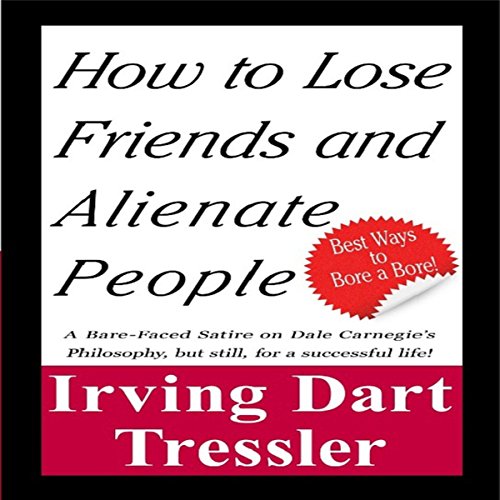 How to Lose Friends and Alienate People

How to Lose Friends and Alienate People is a bare-faced satire on Dale Carnegie's worldwide best-selling book How to Win Friends and Influence People. It is also a self-help book, but it tackles the issue from the other side. Irving always considered that Dale Carnegie was all wrong when he encouraged people to smile and be optimistic. His philosophy is totally different. For Irving, great life achievements can be made by those who live negatively.

In this book you will find advice on how to lose friends and make people hate you so that you will be more productive and successful in your life. This is a self-help book unlike any other. It is the only book that has ever been written to help people dissolve their human relationships in favor of having a better life!

According to Irving, some of us are born with ability to make others peeved, but most of us aren't. We flounder about making empty, vapid, pleasing remarks and before we know it we have another "friend" and have invited him to lunch "someday". The trouble with most of us is that we don't talk enough. We let the other person get in his views and opinions and permit him to think we are interested in what he has to say. As a result we have "friends" who "drop in to say hello", corner us on streets to point out what we already know about the weather, invite us to boring dinners, arrange stupid theater parties, and in general ignore the fact that most of us are non-gregarious.

Tressler has made a living by teaching people how to talk and tell others what they are thinking. That is every man's trouble - he never says what he thinks when he thinks it. Tressler helped people overcome this through his courses. He has developed a course that is one of the significant movements in U. S. social history, a course that's as real as halitosis and even more lasting in its results. How to Lose Friends and Alienate People was written for those unable to attend his course. It is aimed at the millions who don't know how to avoid being bored daily in office and home, on street and at table by people who are just plain dull!

Would you try another book from Irving Tressler and/or Gene Tognacci?

I did not realize this book was written in 1937 and was a parody. I will be returning it. I could not even listen for an hour. Not my cup of tea. that's all.

I made a mistake when buying this book. I should have read the reviews first.

nothing positive. Useless book that propouses to be mean to everyone, so you can be alone. That s it.