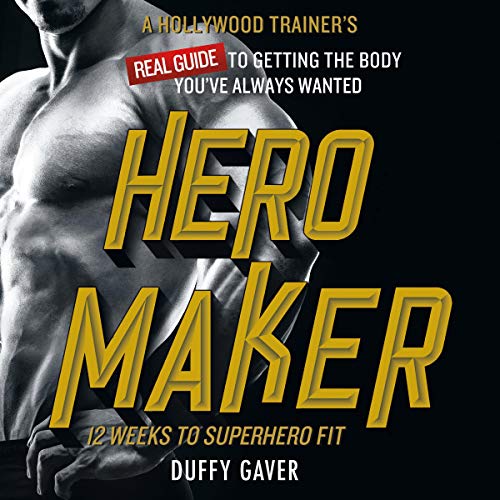 Former Marine sniper and ex-Navy SEAL Duffy Gaver is the unsung hero of Hollywood. As a master trainer to the stars, he has transformed the bodies of actors such as Chris Hemsworth, Chris Pratt, Scarlett Johansson, Brad Pitt, and many others. He is a hero-maker. Duffy is the owner of his own gym in Santa Monica. He gets the most out of his clients by making them rethink their lives. For Duffy, the fitness industry sells a myth: It's all about the latest and greatest fads.

Back in 1965, Larry Scott won the first Mr. Olympia. There was no Nike. No thermogenic products. No supplement industry. How did he do it then? With his will, his discipline, his desire. The things that big businesses can't manufacture. The first four-minute mile, the first Ironman Triathlon, and the first World's Strongest Man all took place before 99 percent of today's companies even existed. What does this prove? None of this stuff is necessary.

Inside Hero Maker, Duffy Gaver shares the knowledge and motivational sit-downs that get his stars to take hold of their own bodies. None of these stars bought their way to their impressive physiques; they earned it with old fashioned work and dedication. He will tell you what you need to do to look super heroic, and he will show you how you too can do this if you put yourself to the task. Inside, you will also find some of his game-changing workouts to help get you there.

I need to lose weight because I am obese and while I have tried other lifestyle changes I was failing them. By following the advice in this book I was able to refocus my life towards fitness while losing weight. I have a long way to go in weight loss to see my abs however the book has given me what I need to be better at it.

Simple, back to roots approach and excellent inspiring content which includes schedule, exercises and basic nutrition. Just wish the audiobook's pdf had the 12 wk program schedule, purchased the hardcover as well, couldn't imagine writing down the 12 weeks worth of training plan from the audio recording...

great for beginners or that kick to get back in

Super happy I listened to this! can't wait to get exercising! it's great information for a beginner who doesn't know what to do or how to do it. It's also great for those of us who have fallen off the exercise horse and need the motivation to get back on. No excuses! It's hard work, but the best things in life are going to be. You'll feel terrible for 2 weeks as your body adjusts, but after that working out becomes enjoyable. And you see great results. make no mistake, your results are totally based on your attitude and what you're willing to put in. Good luck!

THIS one really helps!

Duffy, thank you so much for making this book 'simple', and thank you for making the plan attainable & reachable. This is not a book that's full of all of this meticulous analysis or deep complex information that's hard to pronounce and difficult to comprehend.

He makes it all simple for you to learn and understand. but, now that he makes it extremely simple for us, the pressure & the excitement is on us now because he gives us the answers and the simple plan to get there.

If you are wondering what foods you're supposed to eat & how often you're supposed to eat them, he covers it in a simple way. If you wanted to know about all of the people he's worked with and what he put them through, he explains it clearly. If you are either too skinny or too fat, he outlines his simple plan for either one of you. The thing I love about this book the most is...... it's SIMPLE INFORMATION and as you can see IT WORKS, from all of the movie stars he's worked with (both male and female).

I hate the books that get off into all of these crazy, analytical strategies with some of the most confusing terminology unknown to the common reader. If you needed an answer or an ounce of Hope to let you know that you can make this happen, he wrote this Book with all of that inside of it. I'm extremely grateful. Also, whenever you get a chance check out Duffy Gaver on youtube. He has some great videos and interviews with some of this information on there as well.

It’s not for everyone but if you don’t mind straight forward no nonsense it may be for you.

This guy is legit, Don't be an obesity statistic

Duff actually wants to help the majority, Don't waste your time buying miracle pills or other sh$t, it doesn't work. That's why we're all fat and dying of diabetes and heart disease.

F%&k'ing get out there and grow. As a healthy young adult with a strict diet he changed my life, I'm well on my way to being a superhero.

If this book doesn't motivate and change your life then you might want to both get a new life insurance policy and also apologize to the human race for evolving backwards.

Do it for YOU. It's so simple, Duff eliminates all excuses and makes being fit enough to save the world so easy.

So since we’re in quarantine I got time, and decided this was a good way to spend time. Got the book for encouragement and the 12-week plan. And it does that. I’m modding it a bit because I only have access to dumbbells at the moment, but my muscles are still screaming at me. I love it!

Changed the way I view fitness

Learned some great new tips on strength and Cardio.

I loved that it was not to long and straight to the point. Easy to understand and follow.

But, I felt that I was left hanging a bit in the nutrition section. Wish there was as much focus on macros and calories as there was on rep schemes and form. Other than that I think it's a great fitness audio book. So, I gave it a 5