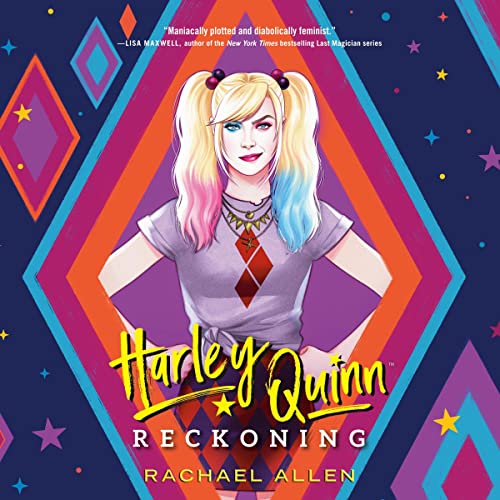 In this new launch of a trilogy within the DC Icons universe, experience the origin story of a super villain. This is the Harley Quinn backstory fans have been waiting for.

When Harleen Quinzel scores an internship in a psych lab at Gotham University, she's more than ecstatic; she's desperate to make a Big Scientific Discovery that will land her a full-ride college scholarship and get her away from her abusive father. But when Harleen witnesses the way women are treated across STEM departments—and experiences harassment herself—she decides that revenge and justice are more important than her own dreams.

Harleen finds her place in an intoxicating vigilante girl gang called the Reckoning, who creates chaos to inspire change. And when Harleen falls for another girl in the gang, it finally seems like she's found her true passions. But what starts off as pranks and mischief quickly turns deadly as one of the gang members is found murdered—and a terrifying conspiracy is uncovered that puts the life Harleen has worked so hard for at stake. Will she choose her future—or will she choose revenge?

In this refreshingly feminist spin on the story of our favorite villainess, Harley Quinn: Reckoning traces Harleen's journey from precocious, revenge-obsessed teenage girl to a hardcore justice-seeker on her way to becoming the most captivating super villain of all time. This is one story that you won't be able to put down.

The original titles in the DC icon series were pretty good stories. These last two were basically just platforms to push agendas and issues.. Let's stop politicizing and feminizing everything and just tell good stories... I was excited for this title and it was ruined by pushing agendas rather then telling good stories...

A Great Origin Story That Not Everyone Will Love

Let me start by saying I'm a big fan of Harley Quinn ever since she first appeared in Batman: The Animated Series. I really enjoyed reading about the early life of Harleen Quinzel. This reimagining of her backstory is quite great and I love all the Easter eggs the author sprinkled throughout the tale. Harleen was extremely well written and this story shows how she persevered through a horrible childhood and still came out on top. It highlights her intelligence and athleticism as well as that outrageous personality we love. I really wish I could give this a full five stars but I had some gripes with it that I'll go into.

The next part of this review will contain spoilers, so if you're not ready for that just know that in my opinion I believe the author tried to push a certain agenda too far.

While this story was obviously written to not just tell us the story of a young Harleen Quinzel and her journey into becoming Harley Quinn but to also shine light on the difficulties that women have in the STEM fields, in my own opinion I think this story takes it too far. I find it very hard to believe that every single male Harleen has interacted with in this story to be a piece of shit human being. Literally every male character, except for perhaps one classmate is some kind of sex offender asshole, EVERYONE! If this is a true representation of what it's like to be a woman, than I sincerely apologize, but for me, with everyone being such a trash human being and all the women being such amazing characters, it's just a hard pill to swallow.

Really brings Harley and the light for her past better than other versions of our origins story.

suggest listening to the epilogue first, explains a lot of the decisions taken in the story.

Excited for the Next One

Loved it! had me excited to start the next one but I have to wait a year for it!

I wish the Author’s note was read first. I would have love the book even more.

As a survivor of child and intimate partner abuse, I’ve often looked to Harley’s character and her healing journey.

This story was empowering.

The depiction of misogyny in academia was accurate and validating to my own experience. This group of women were able to do something about it and it felt incredibly cathartic.

This is the Harley story I’ve been waiting for, thank you 💜

This story spoke to me level most don't. All should read it at once