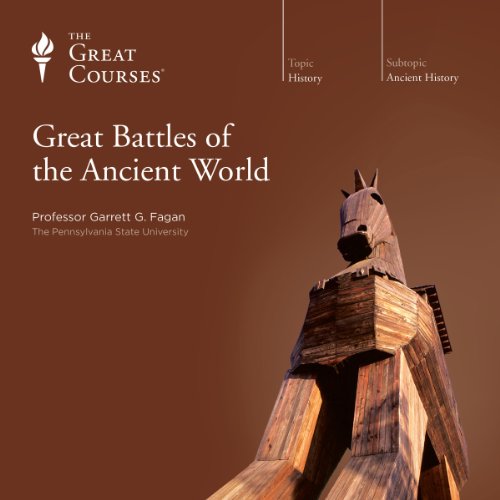 Great Battles of the Ancient World

Forget Hollywood's portrayal of violence and mayhem in ancient warfare and find out what the ancient battles were really like. What were the weapons, tactics, armor, training, and logistics? What were the crucial factors that could turn the tide of battle, giving one side victory and the other defeat?

In 24 exciting lectures, Professor Fagan introduces you to the many fateful battles that became crucibles of history: the fearsome clash between the Athenians and the invading Persian army at the Marathon, Alexander the Great's crushing hammer-and-anvil tactics against the Persians at Gaugemela, and the Roman mastery of siege warfare at the Jewish fortress of Masada.

Encompassing the region from Mesopotamia to western Europe-including Egypt and Northern Africa-this course charts the development of warfare from prehistoric times and examines battles and warfare from the city-states of early Sumer to the fearsome Assyrian war machine, the Greeks' distinctive form of combat, the Persian invasions, and the legions of Rome, which evolved brutally effective tactics that gained them dominion over the entire Mediterranean basin.

Although the battles you study were fought long ago, considerable controversy exists among contemporary historians. Professor Fagan presents contending theories without losing sight of the grim realities of war, and the many millions who have died on the battlefields.

"We owe it to them," he concludes, "and to the thousands who continue to perish in our planet's wars, to understand as fully as possible what it was that killed them. If this course has advanced its audience's comprehension of war even a little, then it has amply fulfilled its purpose."

A Series of Violent Episodes Create a Whole

Would you listen to Great Battles of the Ancient World again? Why?

This course presents a unique look at ancient history by focusing on key battles. The context of the battle is established and its conduct and outcome discussed in detail.

While this is a series of episodes, Professor Fagan makes it a whole story. The battles are presented in a narrative of the emerging civilizations and empires of the ancient world. This ties them together so you can see how they affected the course of history.

The detail on strategy, tactics, and armaments is excellent. The descriptions are complete. There is never a dry moment.

What about Professor Garrett G. Fagan’s performance did you like?

With a wonderful speaking style, Professor Fagan pulls you into the story and makes you see the scenes he describes.

I loved this and all your great courses, I had so many questions I wanted to ask you, but you're up there and know all the answers now.

Would you consider the audio edition of Great Battles of the Ancient World to be better than the print version?

The Presentation, the Professor Fagan is truly a great at what he does.

What about Professor Garrett G. Fagan’s performance did you like?

His knowledge, his presentation, and his objectivism.

I wish I was in this classroom :P

If there is only one issue I would take with this is his lack of descriptions of various weapons and how they were likely used in the battles he presented. I realize that this is difficult given our (lack of) knowledge, but even speculations would be great.

Otherwise, I love Professor Fagan and will listen all of his books (I already listened to his lectures on Ancient Rome).

Engaging narrative, but a little too argumentative

Cautiously. Professor is a little too obsessed with settling scores with other scholars. Final lecture goes off on a riff attacking Victor Hansen.

Would have given 5 stars if it had focused more on the weapons, tactics, and fighting methods.

Terrible Delivery, Not a "Great Course"

What disappointed you about Great Battles of the Ancient World?

The professor read his text the whole lecture series, but he doesn't read well. There was no attempt to bring the stories to life, he merely read his text. And he tended to get deep into the weeds with proofs and attestation of ancient battles and events and stray off the story unnecessarily. One of the most irritating aspects of this series is that he spent more than 50% of these lectures dwelling on ancient battles and stories that have no detail by his own admission. The first 8 or so lectures could have been wrapped up neatly in 3 lectures.

If you’ve listened to books by The Great Courses before, how does this one compare?

My favorite lecture was about the civil war, masterful series. This one is the worst. If not for the interesting subject matter near the end of the series, I would have stopped listening.

What didn’t you like about Professor Garrett G. Fagan’s performance?

Very much everything. There was no humor, not attempt to actually engage the audience. I can tell that he's very passionate about this subject. But that's not enough. You have to infect your audience as well.

If you could play editor, what scene or scenes would you have cut from Great Battles of the Ancient World?

The first 50% of the material.

I wish Great Courses would take the time to listen to these things themselves. And Audible should do the same and include a separate series of ratings "editor's ratings" like they do on CNET.

Prof Fagan delivers a well considered and researched look at key points in ancient history. Incorporating multiple points of view and considering all sides of history he provides intriguing insight into why events played out as they did and how they impact our world today.

I came into this series very excited to hear more about the pivotal battles in ancient history. I stopped listening 2/3 the way through because I could no longer bear it.

The narrator, Prof. Fagan, turns an exciting topic into mundane details as though he was describing the past 7 days of bland weather. While I recognize that an academic approach to this history requires the numerous sources and potential conflicts between them, I felt the majority of the comparisons were unnecessary and only detracted from the story.

Maybe that is my mistake though? I came into this expecting an animated, but historically accurate, recounting of the actions and details surrounding some of history's more iiconic battles. I expected some form of entertainment, but instead received an orally dictated dissertation. I gave 2 stars because I must concede that Prof. Fagan knows the material.

I would not recommend this to any person looking to get a glimpse into history but still remain entertained. This may be more appropriate for a lullaby to help you sleep.

One of my favorite professors to listen to.

Garrett G. Fagan gives great lectures. This is the 3rd one I've listened to from him. Highly recommend!