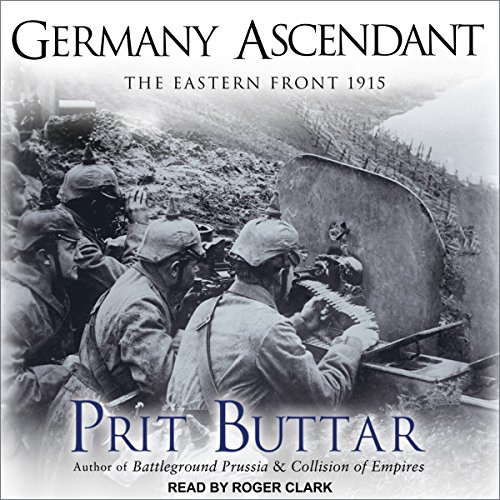 The massive offensives on the Eastern Front during 1915 are too often overshadowed by the events in Western Europe, but the scale and ferocity of the clashes between Imperial Germany, Hapsburg Austria-Hungary, and Tsarist Russia were greater than anything seen on the Western Front and ultimately as important to the final outcome of the war. Now, with the work of internationally renowned Eastern Front expert Prit Buttar, this fascinating story of the unknown side of the First World War is finally being told.

In Germany Ascendant, Buttar examines the critical events of 1915, as the German Gorlice-Tarnow Offensive triggered the collapse of Russian forces, coming tantalizingly close to knocking Russia out of the war altogether. Throughout the year, German dominance on the Eastern Front grew - but stubborn Russian resistance forced the continuation of a two-front war that would drain Germany's reserves of men and equipment.

From the bitter fighting in the Carpathian Mountains, where the cragged peaks witnessed thousands of deaths and success was measured in feet and inches, to the sweeping advances through Serbia where the capital Belgrade was seized, to the almost medieval battle for the fortress of Przemysl, this is a staggeringly ambitious history of some the most important moments of the First World War.

Second book from Prit Buttar ( and my favorite of the series ) details the murderous fighting in the Carpathian Mountains and the central powers pushing the Russians back across Galicia in the Gorlice -Tarnow offensive . I read everything I can about WW 1 on the east front and this series of books are hands down the best I’ve come across. The author weaves an understandable narrative of these complex battles and the politics behind them .

I listened to the first book, Collision of Empires, and thought that it was great in terms of narrator and content, but found it difficult to finish nonetheless. I think i found this one a bit difficult to finish as well (this took me about one month, rather than two), but it's a marked improvement in terms of pacing. No set up, the narrator jumps right into the frontlines and details Germany's rather impressive maneuvers against the Russians. I recommend for fan of WWI and military history.

I enjoyed, just like in Collision of Empires,the entire backstory of the events of 1915 on the Eastern Front. Very in-depth and fascinating.

The book offers in depth look at movements on the eastern front, however repeats some cliches and outright lies. Austrian 28th regiment did not in fact defect en masse, and hearing it in narrator's authoritative and damning voice is quite painful. This is a big historical work. Check your sources maybe...?