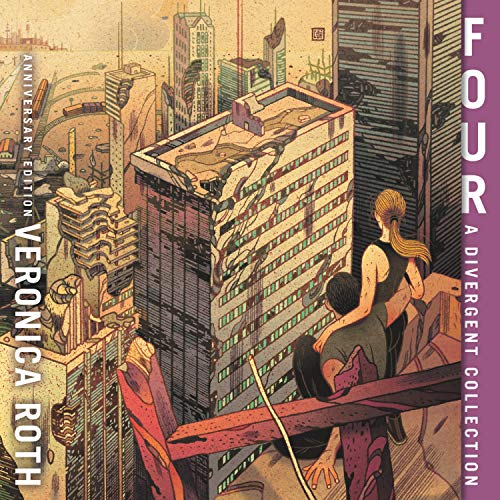 Fans of the Divergent series by number-one New York Times best-selling author Veronica Roth will be thrilled by Four: A Divergent Collection, a companion volume that includes four pre-Divergent stories told from Tobias' point of view.

Listeners first encountered Tobias as "Four" in Divergent. His voice is an integral part of Allegiant. Listeners will find more of this charismatic character's backstory told from his own perspective in Four: A Divergent Collection. When taken together, these long narrative pieces illuminate the defining moments in Tobias' life. The first three pieces in this volume - "The Transfer", "The Initiate", and "The Son" - follow Tobias's transfer from Abnegation to Dauntless, his Dauntless initiation, and the first clues that a foul plan is brewing in the leadership of two factions. The fourth story, "The Traitor", runs parallel with the events of Divergent, giving listeners a glimpse into the decisions of loyalty - and love - that Tobias makes in the weeks after he meets Tris Prior.

very dissatisfied. I wanted a story not this

I expected a story, not a character description which was mostly told in the series. Very few new info regarding Four and may have been a nice addition to the series but wasn't necessary as Four was fully covered. This reminded me of short, informative info normally shown in filling out the character for a story. I thought it was stories involving Four before or after the series. I was wrong and disappointed. I found it boring, repetitive, unnecessary. Not worth the credit I spent on it. Wont make that mistake again with this author or the series.

the narrator did a good job. i found the story a bit disjointed due to going from one storey to thenext, it would bebetter if their was more clear definition between the short stories.

Left a lot to be desired

Much like the "ending" of the final book this left a lot to be desired. So many opportunities for more depth in certain critical areas of the story but then just a lack luster "ending" that's mostly just vague.

it was just parts of the story from Fours point of view, was expecting more

Would you consider the audio edition of Four to be better than the print version?

I read the book first, then I listened to the audiobook. I was about turn off my phone when I heard, "Keep listening for more..." Really? More? Yes!!!! There were three additional stories that were not in the book!!!!

In Allegiant, Four's voice wasn't very well developed. While his thoughts were clearly his own, Roth didn't successfully vary her writing to differentiate between Four and Tris. The first of the novellas in the book also suffered from the same lack of differentiation, but the other stories were much more obviously Four's voice. While she still had Four waxing philosophical as Tris did, he had a much more male edge to his voice.

I will avoid spoilers...Four's Fear Landscape was by far the best scene.

I wish I could have listened to the audiobook in one setting, but the reality of life intervened.

Aaron Stanford has captured the essence of Four. He enhanced Roth's writing and really brought it to life. I am frustrated that there were a few scenes from Divergent that I really wanted to hear from Four's perspective that Roth did not include. At the same time, I'm not sure how well those scenes would have transformed into independent story arches.

There's not much story here. It's just the bare bones. And he tells you up front that he's not going to dish dirt, which is fine. He just skimmed the surface so you don't feel like you know more than you did when you began.

If you could sum up Four in three words, what would they be?

I really enjoy the way Roth has written Four. It is very insightful getting the story from Four's point of view. There are a lot of details that you can guess at from the stories as told by Tris, but this fills in so much more detail. I also really like the character of Four, so I'm glad I got to hear more about him.

What I liked most was seeing how his relationship with Tris affected him.

What does Aaron Stanford bring to the story that you wouldn’t experience if you just read the book?

Aaron Stanford has a voice that really fits the character of Four. He is easy to listen to.

I really enjoy hearing the story from his point of view and getting some back story on Four.

I liked the whole series but the "four" book mini series wasn't as good,story wise, as the rest of the main series

The back story was decent but it was mainly just a rehashing of Four's story as told in the other books.

Love to hear the story from Fours eyes !! A must for the Divergent Series fans!!
Wonderful, love this book.
Good speaker, tumbs up!