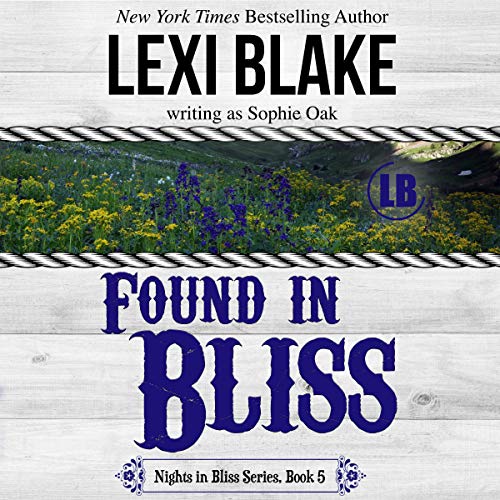 Holly Lang has a hard time trusting men. Eight years ago, her husband tossed her aside and took her son away from her. Finding the little town of Bliss has given her a second chance at life, new friends, and sense of belonging. Unfortunately, Bliss also seems to have filled her days and nights with dreams of two beautiful men. She can’t stop thinking about the gentle but haunted Dr. Caleb Burke, and the exotic and dangerous Alexei Markov.

Caleb Burke isn’t your ordinary town doctor, but he’s always dedicated himself to trying to be a good man. His journey to this quirky little town was not an easy one. Some of the stops along the way left him scarred in more ways than one. But when he first sees Holly, it’s like someone threw open the blinds and let the sunlight into his life for the first time in years.

Alexei Markov is nothing like Caleb Burke. Working as a hit man for the Russian mafia, he was forced to do unspeakable things. He suffered through all the moral compromises to fulfill one simple goal, killing the man who murdered his brother. When a mission led him to Bliss, he found something more precious than vengeance. A woman named Holly Lang. Throughout months of living in witness protection, testifying against his former employers, all he could think about was finding his way back to her.

After returning to Bliss, Alexei and his strange new ally Caleb discover that they aren’t the only ones interested in Holly. Someone else is stalking her and appears to want her dead. The only way to discover the identity of the killer is for all three to face up to the secrets of their past and work together to fight for everything they have found in Bliss.

The Russian Mobster and the Doctor

Hmmmmm...
Those didn't sound like they would go together at all. I guess it all goes to show it is not in the name, but the experiences behind it. Why they became what they did. I think I was just as shocked to note the age differences. Holly deserves it though. I can understand better why some would pick a menage relationship compared to a one on one. Someone always has your back. You have friends and lovers and never feel alone. I can understand a bit better. I don't know if I could do it as right now I am too set in my ways to want one man let alone two, but to each their own. I enjoyed the performance. I am disappointed only one other bliss book is on audible at this time and it is not on audible escape either. Not that I can't read them, but I really like listening and doing other things. so yeah, I am missing the ease of listening to bliss. I know I am not the only one. Truth!

As this series progressed I became more and more intrigued by Caleb Burke. Alexie is the perfect person to help him with his issues and bring these three together. This story has all the fun, feelings and intrigue that I have come to expect from Bliss Colorado. I so wish this was a real place to visit! Life is definite better in Bliss ❤️.

It was wonderfully cute

Who would have thought that a triad would be less about the sex and more about the connection between the partners.

Alexei has returned to Bliss for Holly and Dr. Caleb..the big Russian has left witness protection and decided to stay in bliss and make his home there. Caleb and Holly both ended up in Bliss running from personal circumstances. While The doc is quirky in his own way, everyone know how he feel about Holly, but he won’t let himself love again, not after all of these years. When all 3 finally come together, can they let go of their past troubles to see the good in finally coming home.

Ok, I won’t lie, all of the talking Alexei and Caleb do during sex was just too much. Good Lord, those 2 couldn’t shut up. They must be hot because I would have surely loss my libido if I had been in the room with them. Now that aside, Alexei should really go to school for psychology. That man has such a handle on who he is and pays attention to the needs of his partners, not to mention he has the patience of Job. He is the perfect guy to be part of this threesome with Holly and Caleb. Who knew that Caleb had all of that kink bottled up in there. His use of anatomy during sex is both intriguing and irritating at the same time.

This was a great story. Holly’s son is hysterical and I hope we get to see more of him. I hope Logan finds himself. That guy just breaks my heart. As always we get caught up on some of your other characters of Bliss and set the stage for the next story,

I’m enjoying my time in Bliss and can’t wait to start the next story.

Best of the books so far

Each book in this series is good and introduced the characters for the future books. The intrigue and suspense keep you wanting more. The romance and love make it moving. The narrator did a great job with each voice.

i love this book. i am now a Lexi Blake fan as I have most of her books in the series.

I was looking forward to this story. In fact, I was going to ski the previous in order to get to this trio but decided not to so I wouldn’t miss anything.

If you read my last couple/few reviews, you’ll understand what I mean. Aging and addition😂 was better; thank you.

Worst thing was the narration (still gave it a 3 because it was average and there wasn’t a 3.5. Russian and an American duo become a trio in Bliss. There’s so much more but you need to read previous books. The reason I wanted to skip this book was because I empathize so much with the characters. They were not the main character but I still felt drawn to them. Yet, when the Russian, Alexie [sp.] had his inner thoughts he had an American accent. Why?!? He is Russian. This throws one off because you don’t know who’s thinking or if it is a conversation (quite distracting).
Also, and it is an author thing , i believe, it was repetitive. Repeating feelings, thoughts, and emotions were repetitive. Could have shaved off many minutes. I don’t mind different characters doing it but when the accent isn’t maintained by the individual characters you get lost and have to rewind. Would’ve been better if the narration had stayed in character. Russian and American. One could shave off more time.
Story was not as good as Laura’s (hope I gave that a 5/5) but it still maintained suspense and thriller.

Sensuality, A*! In fact, it had an added benefit with the Doc’s anatomical discrimination- titillating!

Definitely a read. Still think the order is a must!

Will I read another? No. Why? Not available unless I pay. Two, no other characters pulled me to buy or seek the next. Will I try to continue,only if a character motivated me (Marshal or Logan) and if it was free.

this was by far my favorite of this series! there was humor, angst, suspense and intrigue. I loved Alexei, I thought both the narrators Kitty Bang and Lee Samuel's did an excellent job keeping the Russian accent sounding the same throughout the book and to my ears sounded authentic as well! Lexi blake did not disappoint and continues to draw me into every book of hers!

Favorite of the Series so far

The narrators did a good job. This is has been my favorite of the series so far. This story was filled with action, sex and the coming together of Holly, Alexei and Caleb. This book entertained me a lot and I laughed more than once.

This one is by far the best, I love this trio they were so weird and funny but so so sweet.. caleb and alexei are the best soulmates and I love how alexei glue them all together properly. This one is the funniest one by far and is as weird ass the other ones or more and I love it.

This has turned out to be one of the best so far. There was an interesting storyline but the characters made it. All their pain helped form the amazing relationships they had and not just the hot sexual kind, that was only a small part of the relationships going on. The least one you’d expect, turned out to be the smartest of all in reading people & situations. Great narration by Mr Samuels and good by Ms Bang, if she’d only learn to say Callie clearly.