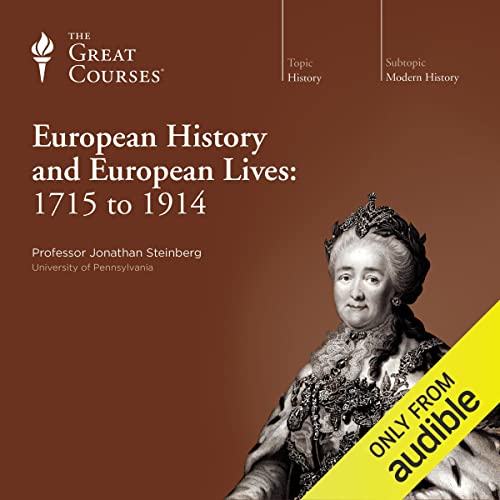 Meet 35 of the most influential people who lived during the 200 most difficult years in the history of the West. Between the years 1715 and 1914, the lives of these artists, writers, scientists, and leaders shaped our times and reflected their own.

You'll meet such figures as Charles Darwin, Sir Robert Walpole, David Lloyd George, Mary Wollstonecraft, Captain Alfred Dreyfus, Napoleon Bonaparte, and others whose lives represent the crucial forces that shaped European history during two decisive centuries. You'll also examine the transformation of Europe from a world of lord and serf, horse and carriage, superstition and disease into today's modern state of boss and worker, steam and steel, science and medicine.

As you grow to understand the living context of European history, you appreciate the great transforming themes embodied by the people who populate this fascinating march. The two most important themes are the movement toward democracy-culminating in the French Revolution-that dominated the first of the two centuries covered, and the Industrial Revolution with the explosion of science and technology that dominated the second.

In choosing the characters whose lives most reflect these themes, Professor Steinberg has not confined himself to those who are most often studied-monarchs, politicians, military leaders-but has included scientists, artists, philosophers, and industrialists, and even an entire population threatened with starvation-the Irish. With a fascinating approach to European history, the biographical approach of these 36 lectures provides a fun way to look at the great changes of the period and to educate ourselves about the world.

Loved this!! Compelling, Intellectual and Fun

I have listened to several great courses on history and have enjoyed them all, but this one really stands out. Professor Steinberg is a gifted intellectual and story teller. I would take any course he offered - no matter the topic. THis series offers a big picture view and challenges you to consider the information within historical constructs. At the same time, it feels like you're listening to someone who personally lived during the time of each of the individuals he discusses. I am grateful to Professor Steinberg and Great courses for preparing the material in this way and sharing it. I will listen to the whole series at least one more time.

I especially liked the lectures on Frederick the Great, the potato famine and Wagner but they are all fantastic. I cannot recommend this highly enough. What a treat.

Would you listen to European History and European Lives: 1715 to 1914 again? Why?

I have several Great Courses in my library, and I have enjoyed this one the most. Of course, I knew of all of the people in the 35 biographies, but there were several that I knew relatively little about. I learned a lot and will listen again.

A great place to start

This is an older Great Course but it is also one that best that I have listened to. Professor Steinberg does a fantastic job using biography as an entry point into the larger history of Europe, Then time and again he uses that larger history to show the unique character of the person he is talking about. His style is engaging and understanding all throughout.

A great entry point into modern European History, heck into history and its importance and power in general: this is one that should not be missed.

Biography and History - my favorites together!

I really enjoyed all of these biographies. I would not give this lecture series the full five stars, though; more like 4.6, simply because these lectures would have been better with another 10 or 15 mins. I could feel the Professor cramming information into the short 30min lectures. Some of them are shorted on biographical info that could give one a better feel for the individual. Nevertheless, I enjoyed these every minute and the Professor was excellent. You don't need to know everything about this period, but the Great Courses Long 19th Century would nevertheless be a good primer. (That one is also excellent)

Starting the 2nd time through today. He contextualizes so well providing a superb overview of a complex issue. Professor Steinberg is a history buff's super star.

* Fell well short on the biographical side - read much more like a list of history events with birthdates thrown in. Could have asked Alexa to read me the wiki pages and it would have been more entertaining and informing.
* Shortshrift on the impact of women - chapter on Victoria focused more on her husband than her. Did not even mention how the placement of her children helped to shape the next century of royalty across Europe.
* Lots and lots of dates and numbers listed out, which is not helpful when listening - author even refers to chapter numbers often towards the end.
* This is an old lecture - recorded in 2003. If it was more modern, lessons learned in the past 20 years may have made this better in structure and content.

This is a great approach to a traditionally difficult subject; my only suggestion would be that, when the lectures are presented outside the context of a curriculum, they would be benefit from a bit more scene-setting in the first minute or two: What dates are we talking about again? Where is the action geographically speaking? What else is going on in Europe at the same time?

This course provided a unique approach to studying the 19th century, its key themes, and the origins of the horrors of the 20th century's two world wars.
I really enjoyed Professor Steinberg's flow, tone, and occasional humor; much more personality than other lecturers.
I definitely recommend this course.

I really enjoyed the history and biography lesson. This lecture series gave me a mini background on each person and some interesting facts on history. I will dig deeper on a few of the people featured here. I enjoyed the narration and his personal views. I have listened to many lectures in the great courses series. This one was, by design,meant to be a more generalization of the topics. Highly recommend!

A very good overview of the time period. Provides good suggestions for future study and reading. Provides a good balance of detail and overall breadth.

As I didn´t read the description of the course ...

... I was in for a surprise. The "European Lives" - part in the title is meant quite literally. But in the end the approach is astounishingly convincing. An introduction to the general background cristallizes in the live of an outstanding representative adding live and colour to history. Well done, Prof. Steinberg.
To decide whom to pick, must have been a difficult part in preparing the course. And while I liked all the portraits (my favorite: Joseph II, a lucid analysis of the limits of power), I missed some of the important figures of the industrial and scientific revolution (Prof. Steinberg selected Darwin, Pasteur and Krupp). And from the mid 19th century I felt the restrainment to the European theater is increasingly artificial. But this critic stems probably mainly from the wish for a follow up.
Also very nice: The pdf is just short of an complete transcription of the course.