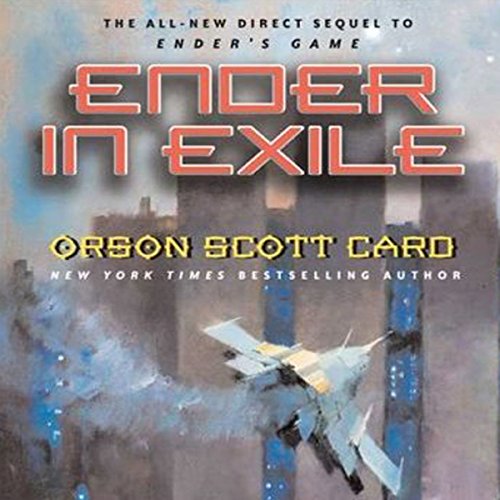 Orson Scott Card returns to his best-selling series with a new Ender novel, Ender in Exile.

At the close of Ender's Game, Andrew Wiggin - called Ender by everyone - is told that he can no longer live on Earth, and he realizes that this is the truth. He has become far more than just a boy who won a game: he is the Savior of Earth, a hero, a military genius whose allegiance is sought by every nation of the newly shattered Earth Hegemony. He is offered the choice of living in isolation on Eros, at one of the Hegemony's training facilities, but instead the 12-year-old chooses to leave his home world and begin the long relativistic journey out to the colonies. With him went his sister Valentine, and the core of the artificial intelligence that would become Jane.

The story of those years has never been told...until now.

Great story but annoying voices. Get decent professional actors for heaven's sake! Tone and articulation are flat, rythm is monotonous, and emotional moments are plain cheesy...

Excellent addition to the series.

I was expecting just a plugin to fill holes in the story line but got an excellent book comparable to any other in the Orson Scott Card collection with again an amazing cast of narators.

A Change of Perspective

First off, I pretty much read anything by OSC from books, essays, etc. The Ender & Shadow Series have always been my favorites.

"Ender in Exile" covers from the ending of the formic wars, all through the Shadows Series books (to date) and comes to a completion prior to "Speaker for the Dead". While the book has many underlying themes such as "How Ender deals with the knowledge that he killed the formics" the book feels more like collection of short stories than one cohesive narrative. Many of OSC books are written this way (Folk of the Fringe) and are made all the better for it. This is not neccesarily a bad thing. Though it can leave you wanting more if you expected one specific storyline.

The book expounds on many of the details left at the end of Ender's Game. Details as to how the actual decision to send him away from earth comes about and his actions after arriving at Shakespear Colony. It even completes some storylines from the Shadow Series. On these merits alone, anyone who is a fan of Ender or Shadow Series should read this book.

In my humble opinion, here is my one issue with the book. At the end of Ender's Game details are not given and a lot of information is left for the reader to imagine on their own. In my case it was how ender and valentine once again cultivate a brother and sister relationship. I'm sure it will be different for each reader, but "Ender in Exile" gives those details so the way you expected things to happen may be challenged by this book. I wouldn't call this a shortcoming but does call for a change of perspective at times.

All in all, I enjoyed this and would recommend it to all Ender fans. I would suggest that you read throught the Shadow Series before starting this book.

Note: There are some chronological problems between this book and the other books in the series. OSC discusses and resovles this in the Author's Note.

Can't Get Enough of that Wiggin Boy

Having cut my eyeteeth on 50's and 60's SF, I tend to hold all science fiction up to those standards. Audible has given me the opportunity to relive old favorites and expand my base of new ones. Ender's Game and its progeny hit the mark. A whole lot of Hugo and Nebula winners did not - I have had to flog myself into finishing quite a few. Even though I see the shortfalls some of the more critical reviewers see in Ender in Exile, I have to say I couldn't wait to get back in my car to immerse myself in Enderverse once again throughout the story. This would be a poor choice for a first entry into this series - but with a little background on the story, I think it's a fine effort. There is something captivating and comforting in living inside Ender's ever-infallible head once again. Aside from plot, characterization and pace, my idea of a good book is one that I don't want to put down. This book passes the test. Give yourself a treat and sit down once again with your old pals Ender, Valentine, and Colonel Graff.

Of course the book is predictable. Any book inserted into an extablished series where the beginning and end is known would be predictable. If that logic held true they would never put 'new' rides in amusement parks because hardly anyone would use them. This was predictable, but as pleasantly enjoyable and convoluted a ride as the others in the Orson Scott Card theme park.

Last book in the series: For a reason

This book is the last of the Ender books. That is a fact and it means you are expected to remember the other books. After you read the book you figure out that it is an implied fact; being the last book, that you have read the other books before, if you have not you will be largely lost during the points where the allusions and nuances come into play.

Great book for about 10 hours then it starts to slow down some, overall an excellent read with the same type of reading that you have become familiar with. Stephan Rudnicki really does make this book as the voice of another actor comes into play later on and totally spoils enders persona in my opinion.

The only downside to this book is that it marks the end of Enders adventures, his line of thought, and insightful reality that is the Enderverse.

This book is suppose to elaborate the space between Ender's game and Speaker for the Dead and also tie the Ender books to the Shadow saga.
The book has a few interesting themes but suffers from slow pacing an and a lack of major events occurring. There are also awkward moments of logic and plot progression as the story attempts to tie three very different books together. Orson Scott Card is simply too fettered by his consistency obligations to the other books and the story suffers terribly because of it.
Ultimately this book never transcends what it is: a filler for hardcore Enderverse fans.
I would not recommend this book to anyone who has yet to read and enjoyed the other Ender and Shadow saga books.

I don't rate 5 stars lightly - If you liked any of the other Ender audiobooks produced by Stefan Rudnicki, then this is a must listen. It features a full cast (the usual) of narrators, and thankfully, they don't overdo the accents for this one (see Xenocide). There is also a nice afterward from O.S.C. Enjoy!

So much opportunity wasted

A great narration team failed to rescue this one. I appreciate that this team was held together to get all books in the series done, well done Audible.

This was meant to be a warp up for the Bean series and a fill in between Ender's Game & Speaker For The Dead...aparently everything needed wrapping up quickly & without substance and the was nothing of genuine note between the 2 novels.

As a huge fan of both the Ender & Bean series I was looking forward to the possibilities of how the two stories could be brought together,but so many opportunities were wasted, so many fantastic characters available and this book read like a seires of notes and scribbles that were later to be expanded upon into a novel.

The 1st 1/2 of the book was a reptetive retelling of details that were defined at length in other books and now were again detailed at length with no real addition to the story.

None of the new characters in this book were given the chance to be as interesting as most others in either of the series, I felt nothing for the people in the starship part of the book and 10 time less for those on the planet.

Sure everything was wrapped up... but wrapped up in a "cliff notes" fashion, Enders Nemesis Achille Jnr. was a Shadow of anything he had faced before and was just not convincing(in terms of ability and achievements) to be a worthy nemesis. Anything mentioned about his efforts, means and reasoning felt like "Cliff Notes" that had previously been used sparingly at the start or finish of a novel as wrap ups or explanations of situations facing the characters. Now they were used for everything.

A real poor effort on behalf of the author who seemed more interested in researching & correcting the time and event discrepencies of the other novels than writing a fitting conclusion, I genuinely expected more...

Ender's back in fine form

Great for fans of the series

This book really seemed to me to almost be too much of a 'tying up of loose ends' in the ender series rather than some of the more stellar (pun intended) writing that Mr. Card has done. I believe that what seemed lacking most to me was much of the wonderful character development that I have come to expect from each new OSC Novel. In brief if you enjoy the Ender series and have read everything else in it then this is a must read as it does shed more light on some parts of the Enderverse. This is NOT a good book for someone reading into this story for the first time.

GREAT BOOK! I have read all the Ender books and I have to say that this book is the best one since Ender's game. I like it even MORE than Speaker for the Dead.

The latter books in the series just dragged on and on and on and I have to admit that it was a chore to get through Children of the Mind. I was afraid that this book would be the same but I went ahead and got it anyway and I am glad I did.

The characters in this book are so believable and landing on Shakespeare Colony has to be one of the greatest moments in this series! This book made me love and respect Ender more than any of them.