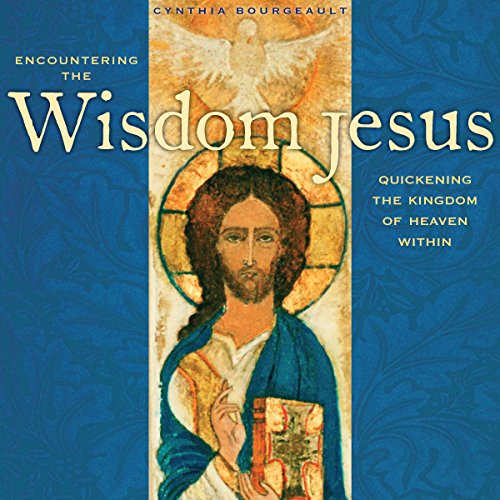 The early Christians, teaches the Reverend Cynthia Bourgeault, were afire with the spirit of Jesus, inspired fully by his teaching of a total transformation of consciousness. How do we reclaim that fire today?In Encountering the Wisdom Jesus, this brilliant author and dynamic Episcopalian priest presents her first full-length audio course about rediscovering the Master of Wisdom. Twelve immersive sessions cover: the parables as wisdom tools; Jesus's teachings about kenosis (or self-emptying: a path as radical today as it was 2,000 years ago); Jesus as tantric master; Centering Prayer, an approach to meditation as Jesus lived it, and much more.

A Deeper Way of Knowing

"Encountering the Wisdom Jesus" is an excellent lecture series. If you have ever wanted to hear an Episcopal priest teach from the Gospel of Thomas as if it were canonical, then this is the lecture series for you.

As the lecture series starts, you can hear shades of Elaine Pagels and Bart Ehrman in Bourgeault as she covers early Christian history. What makes this series of lectures a little more personal, though, is that Bourgeault is a believer. I say that not to judge Pagels or Ehrman, as their books are good regardless of their personal beliefs. However, Bourgeault adds something here that is missing from the more formal history books.

The series then compares and contrasts the Wisdom traditions against the Orthodox. If you have ever noticed that when comparing world religions, you run into statements like this: three out of the four major religions in the world have a similar belief. And without even looking, you know the one that doesn't hold the belief under discussion is Christianity.

It will come as a surprise to the West to all but the most diligent of researchers that Christianity wasn't always the odd standout in beliefs. It was only after Rome and the Orthodox baptized hierarchical governance and purged the gospels of anything that didn't make the case for the guy standing at the front of the church that the divide really started. The Protestants only continued the division, even as Protestantism divided amongst itself, as it combined "right thinking" and exclusion into the art form that is the denominational split.

Understanding this is crucial to understanding how an Eastern religion could be stripped so completely of anything Eastern that today few people even realize it came from the East. As Richard Rohr points out, we have denominations that have so rationalized things that they think Jesus was white.

In contrast to the West, where the central point is a belief system handed down through intermediaries, in the East it is always an individual inward journey. Whereas one group told you what to think, the other group wants you to figure it out on your own. It doesn't take a rocket scientist to see why the second group was so dangerous to Rome. If you could figure it out on your own, you didn't need the guy at the front of the building or the hierarchical power structure.

What Bourgeault is teaching here is as exactly as she says, "a deeper way of knowing." Some of the things that got stripped out of Christianity over time were the best parts. For example, meditation -- a cornerstone of Eastern religions -- was actually a cornerstone of early Christianity. It was only de-emphasized in the West around the 18th or 19th century (source: wikipedia). As you can see, not having Christian meditation is a relatively new thing.

Mysticism was also a causality of "right thinking." What room is there for mystery, when Protestants had scripture (and God) down to precise formulas? Why would you need the guy at the front of the church if you could feel the truth for yourself?

The lecture series ends with nice, short guides to contemplative prayers and Lectio Divina. Again, the best parts of Christianity were stripped out over time. If nothing else, it is good to know history, and the monastic traditions of the early church are probably some of the least known and understood in the West.

That said, it doesn't have to be one or the other. The wisdom traditions fit within Orthodoxy, even though Orthodoxy wants to distance itself from the wisdom traditions. It is only through the wisdom traditions, however, that one can glimpse the unity of Eastern religions with Christianity. A view that has been totally hidden from the vast majority of Christians since the 3rd or 4th century. In that, there is true value in this lecture series, as we could all use a little more unity and little less division and "right thinking."

The Lost History of Christianity: The Thousand-Year Golden Age of the Church -- and How It Died by Philip Jenkins

The Mysteries of the Jesus Prayer, by Norris J. Chumley (book or Amazon instant video)

Resurrecting Jesus: Embodying the Spirit of a Revolutionary Mystic, by Adyashanti

Jesus And Buddha - Paths of Awakening, by James Finley and Richard Rohr (hard to find).

The Wisdom Jesus led me down a path of discovery, illumination and elimination, pulling together, in one purpose, every encounter, ever spiritual moment, every path of learning I've embarked on! I realized how often my heart burned within me, unconscious of his presence at that moment. I understood the reason for many directional changes and experiences! Thank You for enabling me to not only go deeper within, but dwell there!!!!

Very beautifully presented. I loved Cynthia B's honesty and creativity as well as her very thoughtful presentation. Bravo! Can hardly wait to read her other books.

I found this book to be very motivational. I will listen to her other books, as well as Thomas Keatings and continue to practice centered prayer.

The truth is in the state of our institutions and our lives. We have failed to be transformed and Christianity is facing the gates of hell like never before. The great transformer of people's lives is no longer a viable option in the religious options. But this disease planted from the very beginning has slowly developed a crack and the light of true wisdom is eroding the false doctrines of bloodlust and the light of love is shining on the wisdom of the Christ consciousness and this teacher is one not to be missed. Read everything you can get your hands on and everyone she quotes. The light shines in darkness and the darkness has not overcome it.

Here is the process more than the product

The disenchantment that many people feel today with religion is that it sends a message, “The Church (pick any) has it, you don’t. Come to us to get it.” Bourgeault preserves the sacred mission of church by reminding us all that Jesus cannot be commodified into a product of salvation attainable through creeds or rituals. More importantly, we can direct our energies into a living remembrance of Jesus’ wisdom teaching and the praxis that enfleshes that wisdom into our lives. This is a pivotal and important message for the transformation of consciousness, especially as it relates to an integrated consciousness.

Cynthia Bourgeault expands the words of the gospel to a meaning beyond anything you learned in church. This work led me to another of her works, Centering Prayer. This practice has opened my heart to the God I've been searching for.

Cynthia Bourgeault has a wonderfully calm and peaceful voice. I felt her reverence and her sincerity. I now want to read and hear everything she has ever written/voiced!

Sweet food for the heart

I will immediately listen again and direct my friends toward this treasure. Thank you, Cynthia.