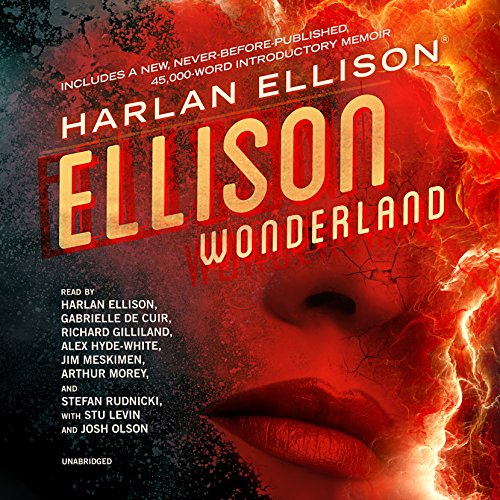 Originally published in 1962 and updated in later decades with a new introduction, Ellison Wonderland contains 16 masterful stories from the author's early career.

This collection shows a vibrant young writer with a wide-ranging imagination, ferocious creative energy, devastating wit, and an eye for the wonderful and terrifying and tragic. Among the gems are "All the Sounds of Fear", "The Sky Is Burning", "The Very Last Day of a Good Woman", and "In Lonely Lands". Though they stand tall on their own merits, they also point the way to the sublime stories that followed soon after and continue to come even now, more than 50 years later.

Your Audio Guide to Ellison Wonderland

For me any new Harlan Ellison audiobook is a cause for celebration. If you’re a fan, this 2015 edition of Ellison Wonderland includes a lengthy new introduction and a new story within the introduction section.

If you haven’t read Ellison before these are earlier works and you may first want to check out his Edge in My Voice collections, which include many of his best stories. He also reads/performs many of the stories in the collection, which I prefer. The other performers are also very good.

Ellison Wonderland is fun and the new material makes it worth your while if you’ve previously read the book.

Here is a breakdown of the contents:
• GO THOU AND DO LIKEWISE: AN APPRECIATION OF HARLAN ELLISON by J. Michael Straczynski
• Author’s Introduction: THE MAN ON THE MUSHROOM (1974/1984)
• Author’s new Introduction: DON’T LOOK BEHIND YOU: THE LAST DANGEROUS INTRODUCTION TO ELLISON WONDERLAND (2013)
• COMMUTER’S PROBLEM
• DO-IT-YOURSELF (Written in collaboration with Joe L. Hensley)
• THE SILVER CORRIDOR
• ALL THE SOUNDS OF FEAR
• GNOMEBODY
• THE SKY IS BURNING
• MEALTIME
• THE VERY LAST DAY OF A GOOD WOMAN
• BATTLEFIELD
• DEAL FROM THE BOTTOM
• THE WIND BEYOND THE MOUNTAINS
• ARE YOU LISTENING? (AKA, THE FORCES THAT CRUSH)
• NOTHING FOR MY NOON MEAL
• HADJ
• RAIN, RAIN, GO AWAY
• IN LONELY LANDS
• BACK TO THE DRAWING BOARDS
• AFTERWORD by Josh Olson

more bio than stories, and the stories are a bore

The first 6 hours (not that you’d know, because as usual there’s no table of contents, despite numerous complaints to audible that story collections need story titles (and authors for multi-author collections listed), are all the author rambling on about his life as a writer. Once the stories begin, they all have mini author intros that you have to forward through. The stories NOT narrated by the author are listenable; the ones are are unbearable. I don’t know how Audible gets away with its game and have made numerous complaints that are supposedly documented, but never receive follow up.

This is very early Ellison. So I would recommend this book to fans of his, but would not really recommend it to people who weren't fans. Ellison was just getting started, and the stories, particularly the endings, are a little bit... well the endings are just a lot of "let me explain what the ending is!" (Tell instead of show.)

Would you be willing to try another book from Harlan Ellison and Josh Olson - afterword ? Why or why not?

If Ellison wrote novels, and selected a single narrator or narrated them himself then I would select one of those to read. I like full cast productions but I don't think it works as well for a short story collection such as this. I had to switch gears so much in terms of narrators.

I enjoyed the narrators, except for Alex Hyde-White, whose voice just didn't work for me. He was not a bad narrator, his voice was just VERY deep and resonated in a way that almost hurt my ears. But overall they were good, and handled the different voices well. There weren't as many characters to differentiate because the stories were short etc. Harlan also narrates all of the nonfiction he wrote for inclusion in this new edition, as well as the introductions to each story, and a few of the stories. Ellison is a great narrator, and is the best narrator for his work.

Did Ellison Wonderland inspire you to do anything?

The afterword by Josh Olson mentioned a documentary Dreams With Sharp Teeth and I am going to get the documentary.

I am spoiled. This is my third Ellison collection. I have previously read Slippage and Hard Candy, which were very formative for me. This is in one way a disadvantage because I didn't follow Harlan from the beginning but in one way an advantage because I saw his later, more complex stories. Some things of note about the collection: There is one woman who narrates and she narrates one story (the story with a woman as protagonist, which Ellison co-wrote.) This means that it was very notable to me that other stories didn't have women as protagonists. Ellison is known for his introductions and essays as well--often giving writers permission, simply, for self-respect. If the advice doesn't apply to you the kinds of things he writes in these pieces might seem overblown in some ways. There are about 5 and a half of these essays in the beginning of the book. I love Harlan's attitude on writing, but these are a little bit repetitive, i.e. they were letters to people in publishing which he had saved and then dissected in an essay. It's writer geek stuff.

I’m still struggling to get through the introduction. What an awful human being. Hopefully the actual short stories are worthwhile.

There must be something wrong with this file. Like another reviewer I only got the introduction and afterword. No stories.

Don't waste your time or money. It's a mid-life recollection of the good ol' days when your little brain outweighs the merits of your big brain. Narration is HORRID.

The stories may be good, I have no idea, I couldn't make it through the hours of Intros, Forwards, and Author's Notes both at the beginning of the book and prior to each story I selected. I doubt I'll ever try any of his books again and definitely wouldn't pay for one… ever. His voice is very hard on the ear. I'd prefer listening to Gilbert Gottfried read to me. Zero ★'s

A personal aversion to Ellison’s voice…

This is a decent collection of writings by a more than competent artist. Yes, he was almost intolerable as a person, but he worked very hard and had a true gift. That being said, this collection is almost unlistenable due to his choking, smarmy vocal patterns. I don’t mean to make it sound like I’m ranting, but… listening to this was like being held underwater by a cheese grater.

that introductions one hell of a rant Harlan...

but introduction was one hell of a rat Harlan! Come get me mofo.... Sigh... Damn it... not even that would raise him from the dead. I miss you cranky old man

Forgive me for thinking that I could offer notes to the great and wise Harlan, but holy shit is this thing a mess.
If you ever find yourself given the opportunity to do a rerelease of a set of stories that started you career and would like to add to it various stories of working in the industry... Go ahead, but don't lump all that at the start of the freaking book, sprinkle that shit in between the original stories that people are here for.
I couldn't get thru all this noise. Just a sad, grumpy old man bitching about decades old slights he suffered and for what? So he gets to tell everyone how clever he is? It just comes off as pathetic.
It saddens me a great deal because the only thing by him I have ever seen is the Star Trek episode "The Guardian at the Edge of Forever" which was heavily rewritten by DC Fontana, so I still have no idea how his fiction works and feels because it is too mired in his mean complaints.