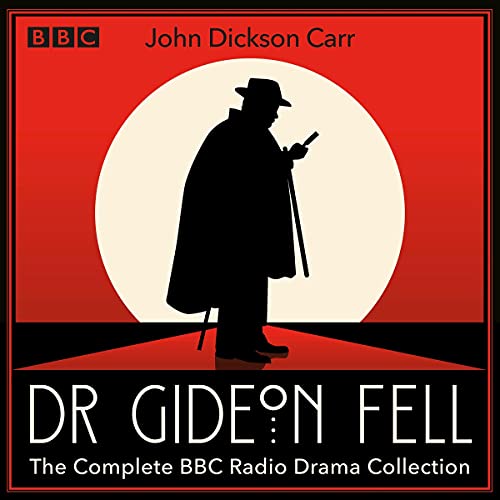 With his cape, canes and shovel hat, portly amateur sleuth Dr Gideon Fell cuts an eccentric figure - but his odd appearance belies his sharp intellect and astonishing faculty for deduction. Created by crime novelist John Dickson Carr and supposedly based on fellow author G. K. Chesterton, Dr Fell appeared in 23 novels between 1933 and 1967. This radio collection comprises all eight of the BBC adaptations based on Carr's best-selling books.

The House in Gallows Lane - 1936, and the peace of a small English village is disrupted by a mysterious death in this captivating drama adapted from the novel Till Death Do Us Part.

To Wake the Dead - On the eve of King George VI's coronation, a woman is murdered in a grand London hotel. But this death is not the first of its kind....

The Blind Barber - When a brutal killing takes place on an ocean liner, the engraving on the murder weapon provides a vital clue.

The Black Spectacles - Three people witness a murder, yet none of them can agree about what they have seen.

The Mad Hatter Mystery - A young journalist is found murdered at Traitors' Gate in fog-bound London, a crossbow through his heart and a top hat on his head.

He Who Whispers - Dr Fell becomes involved in a seemingly supernatural murder, in which the victim was found entirely alone at the top of an isolated medieval tower in France.

Below Suspicion - The stifling respectability of a South London suburb is rocked by a spate of ruthless poisonings - and as Fell investigates, he uncovers a sinister black magic cult....

Produced and directed by Enyd Williams.

Such a great listen! John Dickson Carr has been unfairly overlooked for a long time. He's a member of that golden age of mystery that includes Christie and Sayers, with his stories being notorious in the genre of "locked room mysteries." In this collection of stories, the ingenious Dr. Fell is portrayed by the wonderful British actor, Donald Sinden. He gives the role a great deal of humor, intelligence, and charm. And the supporting casts are equally talented. This is a fun production with intriguing and engaging mysteries, skilled performers, and thoroughly enjoyable scripts.

John Dickson Carr is supposed to be the father of closed room mysteries. These stories so woefully shorten and abbreviate the stories that there's no real thrill or mystery. The blind barber was the worst, literally not even a story. I also didn't like the fluctuations in sound. Sometimes way to low, sometimes way too loud - annoying. I wish they'd cut out the corny music before and after each chapter too. Disappointing.

Enjoyed this a lot. The actors are good, esp the lead charactors, For the most part the voices match the characters.. There is occasionally a little confusion w plots. There is a lot of jumping from past to present in some storylines.

I've read several of these in original form and in their adapting them to play form they have left out small but important points which are key to whether the solution makes sense. I recommend reading these stories instead of listening to them in this format.

Close your eyes and you will have the feeling that your in the cinema. excellent actors, interesting cases. Loved it.