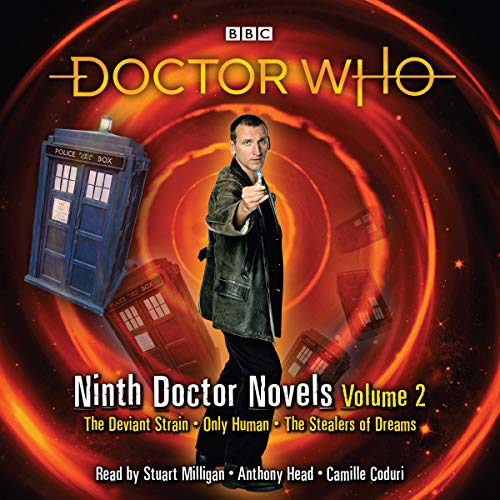 Stuart Milligan, Anthony Head and Camille Coduri are the readers of these three original novels featuring the Ninth Doctor, Rose and Captain Jack, as played on TV by Christopher Eccleston, Billie Piper and John Barrowman.

In these adventures in time and space, the travellers discover a dangerous alien predator at an abandoned Soviet naval base, a Neanderthal man in modern-day London and a world on which fiction has been outlawed.

The stories are The Deviant Strain by Justin Richards, Only Human by Gareth Roberts, and The Stealers of Dreams by Steve Lyons. Based on the hit BBC TV series.

Make it past the first story...

Three stories of uneven quality, although this is fairly common in any anthology. It's just unfortunately the weakest story is the first. Once you get past the long, rambling, tale read by a lackluster narrator, things do pick up. Both Anthony Head and Camille Coduri are excellent and make their stories enjoyable. When I relisten to this down the road, I'll just fast-forward past story one.