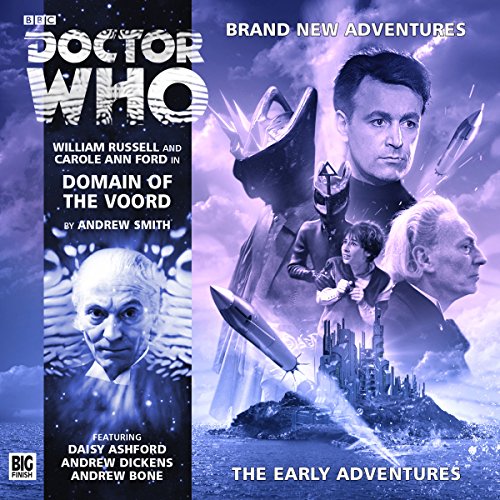 Doctor Who - Domain of the Voord

Doctor Who - Domain of the Voord

The Doctor, Susan, Ian and Barbara land on the planet Hydra, where Admiral Jonas Kaan leads a vast flotilla of ships trying to elude the vicious race that has invaded and occupied their world. But his ships are being picked off one by one, vessels and crews dragged underwater by an unseen foe. The time travellers find themselves pitched into battle against the Voord, the ruthless enemy they last encountered on the planet Marinus. As they take the fight to the very heart of the territory now controlled by the Voord, the stakes get higher. First they lose the TARDIS...then they lose that which they hold most dear. And that's only the start of their troubles. In the capital, Predora City, they will learn the truth of what it means to be a Voord. And that truth is horrifying.

Domain of the Voord Is Dead On

Andrew Smith does an excellent job of resurrecting the whole mythos that was the William Hartnell era of Doctor Who. I enjoyed the fact that he took the time to recall and research the classic episodes as well as the original comics. William Russell's portrayal of William Hartnell was very believable - he had it down to the hems and haws. Carole Ann Ford's also was excellent in her version of Jacqueline Hill's Barbara.
I like how the stories that have been recently coming out for the earlier doctors are fully equipped with all of the sounds and nuances of the fully casted soundtracks of the early lost episodes that were released a couple decades back. They somehow have a little better feel than Big Finish's usual fully performed stories - where they use narration instead of dialogue overkill to give the audience a visual of everything that is happening. I give this story a Mary Poppins rating: "Practically perfect in every way". Keep up the good work guys. :-)

I simply love the early stories of the Doctor, but I must confess I haven't got any further than Barbara and Ian, even though I have watched Sarah Jane seasons and her own spin off.. I wish that there's more out of the Barbara and Ian era that I could listen too.