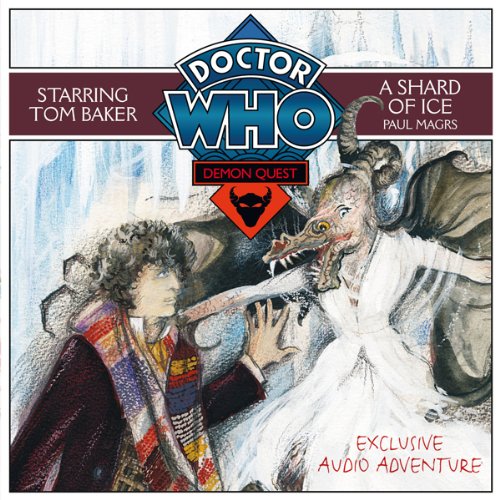 Doctor Who: Demon Quest 3 - A Shard of Ice

Tom Baker reprises the role of the Fourth Doctor in the third of five thrilling brand new adventures, with Richard Franklin as Mike Yates.

In the icy wastes of the Murgin Pass, the Doctor and Mike take refuge in a remote lodge alongside Albert Tiermann, storyteller to the king. But the owner's hospitality is repaid with a grisly attack, and suddenly death is amongst the small party. What is the significance of a book of fairy tales, one of which prophesies the Doctor's encounter with an Ice Queen monster? What long-held secret is Albert Tiermann holding back? And what dark figure stalks the snowy mountainside? The answers to these questions add up to a terrifying encounter with a strangely familiar foe.

With Samuel West as Tiermann, Carole Boyd as Frau Herz, Jan Francis as the Ice Queen, Tom Lawrence as Hans, and Susan Jameson as Mrs Wibbsey, "A Shard of Ice" is the third of five linked stories written by the acclaimed Paul Magrs.

Not really. But it does have an evil alien pretending to be an Ice Queen.
It also has A Hans Christian Andreasen type character in to. The Doctor and Mike Yates make a good team. I hope the rest of the series is good.