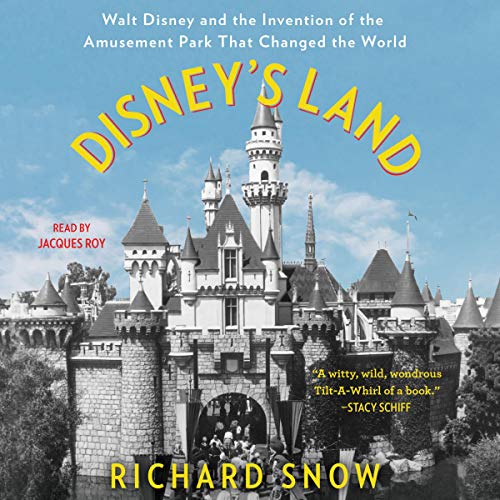 A propulsive history chronicling the conception and creation of Disneyland, the masterpiece California theme park that became at once the greatest piece of urban design in the United States and the world's most prosperous tourist attraction, as told like never before by popular historian Richard Snow.

When Walt Disney imagined a theme park where “his audience could live among Mickey Mouse and Snow White in a world still powered by steam and fire for a day or a week or (if the visitor is slightly mad) forever", there was nothing like Disneyland in the world. Now, 60 years later, theme park rights have become a staple of every entertainment contract. On the way to achieving greatness, Walt Disney, his brother Roy, and a small group of artists, engineers, and designers (none of whom had ever built a theme park) endured setback after setback and engineered their way over and through countless impasses with a signature on-the-fly approach, culminating in an opening day in July 1955 that was nothing short of a disaster.

This is a spectacular story of error and innovation, a wild ride from a vision to the realization of an iconic cultural landscape. It reflects the park’s uniqueness, but just as strongly that of the man who built it with a watchmaker’s precision, an artist’s conviction, and the desperate, high-hearted recklessness of a riverboat gambler.

Okay, but better books on the subject

Although the summary promises “told like never before” a fair amount of this book is a rehashing of stories and information that is found in more original and entertaining sources. While it’s a decent book overall, but those with any basic knowledge of Disney history will find this books retreads familiar ground. In reality almost divided into 5 separate parts: 1) A brief history of Walt Disney’s career, 2) A brief history of pre-Disneyland amusement parks, 3) The building of Disneyland 4) The opening of Disneyland 5) A brief description of Disneyland’s early years and it’s impact. Section 1 is truncated version of the more entertaining and detailed biographies of Walt Disney. It’s hits all the high points of Disney’s pre-Disneyland career. This can be a bit boring for those familiar with Bob Thomas or Neal Gabler’s books. Section 2 is a brief history of early amusement parks like Coney Island. It then describes Walt’s formation of the idea of Disneyland. This actually quite interesting and new material. Section 3 is where the book begins to bog down. Much of what appears here can be found in a new streaming documentary, books by John Hench and others. Section 4 dealing with the opening of Disneyland is perhaps the most tedious. Much of this part of the book is dedicated to a word for word recitation of what occurred in the Dateline Disneyland program that aired on ABC. You are better of just finding the original program and watching it. Section 5 is about Disneyland’s impact and detractors. There’s really no information about Disneyland after the death of Walt. Instead it focuses on the academic impact of the park of the amusement park business, architecture, city planning, culture and its impact. While overall the book is okay. I think there are plenty of well written books on the subject including Sam Greenaway’s book.

Not meant for audio

I loved concept. I’m a big Disney fan and love their history. Was excited for this. But listening to it, it was so hard to follow who was speaking. It felt like the book was nothing but quotes from other people but it rarely attributed who was speaking, making it difficult to follow. The story also felt like it jumped back and forth on the timeline, further adding to the confusion. I think all the content is there for a great story but framing and context needs some adjustments.

This is not the Disneyland book you are looking for.

“The Disneyland Story” by Sam Gennawey is a better rendition of the Disney Story. Jacques is fine, not great, but that could be the way Snow presents the story.

Snow covers Walt Disney's dream of Disneyland from initial pipe dream to the "The Happiest Place on Earth". It's largely about the people who, one by one, built Disneyland as Walt came up with new ideas. 70 years later, those people have faded into somebody else's memory. I thought that the Linkletter 1955 TV introduction took a bit longer then it deserved. I thought the discussion of Walt's trains noteworthy.

Good for beginners to the history.

It's a good book, don't get me wrong. Towards the end of the book they mention reading and being inspired by Sam Genneweys Disneyland Story, but in the end don't really do much to separate themselves from that more comprehensive book. In a marketplace full of Disneyland books, it's just another one. It's not bad, if you've never read a book about Walt or Disneyland history, it cuts out some fat. But I like the fat.

I have many Disney books in my collection. This is one of the better ones. Snow gives a great attention to details. Great read!

Lovely story about the creation (idea, construction, challenges, etc.) of Disneyland, theme park that inspired many more parks to be created.