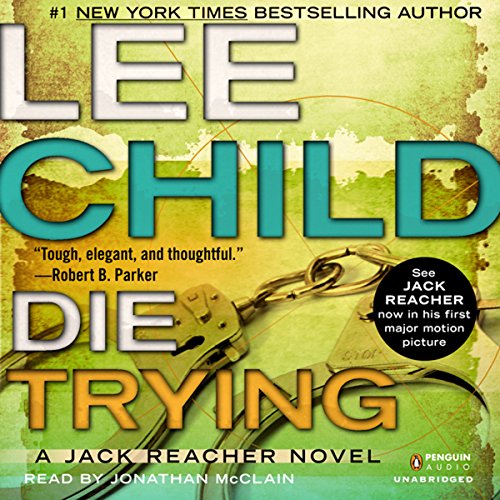 When a woman is kidnapped off a Chicago street in broad daylight, Jack Reacher's in the wrong place at the wrong time. He's kidnapped with her. Chained together and racing across America toward an unknown destination, they're at the mercy of a group of men demanding an impossible ransom. Because Reacher's female companion is worth more than he imagines. Now he has to save them both - from the inside out - or die trying....

“Opens with a bang.” (Chicago Tribune)

“Lee Child’s knowledge of the modern military and its combat tactics amazed me. A chilling and all-too realistic story, and a damn good book.” (Steve Thayer)

Skip this book - not up to par

Fortunately Lee figures out, in later books in the series, that less is more. Here he pile on the 'unrealistic suspense' to the point of ridiculousness. The story jumps all over the place, is lacks a sense of realism and is in face just plain stupid in some parts. I started skipping chapters just to get to the end and then just the in the towel, There was not more intrigue because the story line had gone beyond belief. If you enjoy the Jack Reacher series, as I do, skip this one.

Reading the Series: Skip This One

It's one thing to suspend belief, it's another thing to suspend disbelief. I would have kept the story line about the process of dealing with a hostage to be more realistic. I don't care if you supported Bush I, Clinton, Bush II or Obama (the book is from the 90s, but in some ways is timeless), the reaction of political and military leaders in the plot is beyond belief and totally incompetent.

What was most disappointing about Lee Child’s story?

The director of the FBI and the Chairman of the Joint Chiefs of Staff are not going to be heading to Montana for secret maneuvers without a lot of people knowing what's going on. In addition, the director of the FBI would absolutely know that he couldn't assault a fully armed right wing military compound with handguns and eight marines.An army mobile command post is going to be equipped -- at a minimum -- with USGS topo maps and not a AAA atlas. If I had not read the most recent Reacher books and was basing my reading on a pure chronolgical effort, I would have stopped about halfway through this book, and not read another--especially after watching big, ham-fisted, 6'5, 250 pound, blonde hair, blue eyed muscled Reacher turn into 5'7 Tom Cruise.The story would have worked just fine with a more realistic military/FBI hostage preparedness. Lee Child was lucky this one didn't kill his character.

Who would you have cast as narrator instead of Jonathan McClain?

The bigger problem is that book 1, and all the later books are Dick Hill. Hill is perfect as Reacher. McCain is too smooth and gentle. I believe he is a good narrator, but just not for this series.

Was Die Trying worth the listening time?

Sadly, no. If you want to be able to say you listened to all the Reacher books--and every one except this one has been a 4- or 5-star winner...get the abridged version or check it out from the library.

What would have made Die Trying better?

Narator, story line and no more "Right!" It's all bad.

I listened to the first book and wasn't all that impressed but I thought I'd try book two in hopes it would get better. I don't think I'm even halfway through. Thank goodness I can return this and get my credit back.

What was most disappointing about Lee Child’s story?

It is so far fetched that you can't even pretend any of the events could possibly be remotely true.

And please stop with the "Right" although there not as many as there was in book one.

The first is the bad guy boss. He's described as being a big man. So big that he almost doesn't fit in a truck front seat with 2 other guys. Well his voice sounds like a 5 year old girls when she's playing with her dolls by herself. Heck the switchboard operator sounds more masculine then the big bad boss.

I'm not even sure who the second one belongs to except he's male and a commander of something. His voice is the exact same voice of the bad guy boss.

If you could play editor, what scene or scenes would you have cut from Die Trying?

First would be remove "Right" unless it's a question, direction or agreement.

Second would be Reacher and Holly getting personal while being held hostage and within a day.

I really couldn't get past the narration to pay much attention.

Waste of a credit. Thank god I can return it and get my credit back.

This Book was dressed up as a newly released Lee Child: Reacher Novel.
The narrator butchered this book. I feel like a fool for the fact I had bought it a year ago. It was presented in a manner that allowed me to not check my Reacher series.
I am ultimately at fault, this I can admit.
My ears still burn with the noises that Mr. Jonathan McClain made of the voices throughout the entire novel. I am certain he could perform well in a different genre, because of the redeeming quality I heard in the freeform pure narration parts but not the actual characters voices. This books intensity was displaced due to the characters being delivered in a cartoon like fashion.
I have never written a bad review because the books I have not liked are books that are not in my taste. Yet this time I am actually disturbed, and feel if someone had listened to this book with it’s Narration it may ruin the fantastic talent, and action Lee Child brings to life in the Reacher Series.

Where is Dick Hill?

The plot was fast paced and balanced as it moved between the various sub-plots. Goor, and enjoyable. Loved the book, not the narration.

The voices and 'accents' that the narrator chose to use were forced and poorly done. From the sounds of it, he has never been to Boston, but makes the listener suffer through his interpretation of a Bostonite who lives in Chicago. Also, his attempts at doing other voices (Korean dry cleaner and other shop keepers was painful and borderline insulting). Have to suffer through 3 books before we get back Dick Hill.

Not as good as the first. But wow! Enthralling.

Absolutely. It does a really good job of keeping you interested. I really enjoyed the tactical aspect of it from all parties in the book. Gathering and acting on information.

There's a scene where someone has evil ugly intent for someone and ends up paying for it. I loved it. I was cheering.

Whenever Reacher is upset. He is so cool, calculating (and excited by violence) and those qualities are written into him very well. So when he breaks or shows humanity i really feel it.

Not as good as the first. The first person perspective of the first book REALLY aided in the feel because it was more personal. But still. Excellent thriller. It just got crazier and bigger and more clutch/tense. Tight til the last few moments. Excellent.

really enjoyable, no problems with the narrator

I came to this after listening to all the other Reacher books, as i had become accustomed to Dick Hill. OK, Reacher sounds different, but I cannot understand the criticism. I thought it was excellently narrated and the voices were good (at least to my British ears).

The story was really compelling and I finished it in two days. Overall a very good listen.

Jack Reacher Novel 21 to be released in one month

Die Trying is the second novel in the Jack Reacher series. Novels 2, 3, and 4 are the only ones not narrated by Dick Hill. I think Johnathon McClain does a credible narration job, but lots of other reviewers disagree. In Die Trying Reacher is kidnapped by an Idaho militia along with a female FBI agent whose dad is Chairman of the Joint Chiefs and whose godfather is the US president. Everyone except General Leon Garber, Reacher's old Army commander, believes Reacher is part of the kidnap plot. General Garber and especially his lawyer daughter are major characters in later novels in the Reacher series. Die trying has lots of action and intense suspense.

Lee Child has re-released at least 5 novels in the series (#1, 5, 6, 9, and 10) with no changes in title, narrator (Dick Hill), or content, (not a single word change). To say the least such re-releases irritate me. On the other hand I do not understand why the three novels narrated by McClain have not been re-released with Dick Hill narrating.

Another author, Barry Eisler, re-released most of his books but in doing so he changed the titles and the narrator to himself. Eisler is a great narrator and his re-releaases are much better than the original releases. Lee Child's re-releases make no sense.

I'll admit, I haven't even finished this book yet but I'm afraid I might not be able to due to the narrator. He really can't hold a candle for these books compared to Dick Hill and his treatment of Reacher and the other characters is laughable and completely ruins the tone/pacing of the book.