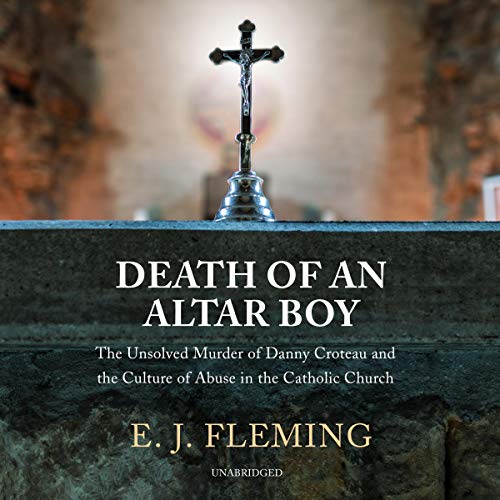 Death of an Altar Boy

Death of an Altar Boy

The tragic death of 13-year-old Danny Croteau in 1972 faded from headlines and memories for 20 years until the Boston abuse scandal - a string of assaults taking place within the Catholic Church - exploded in the early 2000s. Despite numerous indications, including 40 claims of sexual misconduct with minors, pointing to him as Croteau's killer, Reverend Richard R. Lavigne remains "innocent."

Drawing on more than ten thousand pages of police and court findings and interviews with Danny's friends and family, fellow abuse victims, and church officials, the author uncovers the truth - church complicity in the cover-up and masking of priests' involvement in a ring of abusive clergy - behind Croteau's death and those who had a hand in it.

Mispronunciations. They are like shrieking horns. The only saving grace is that the reader mispronounces the word, in the same way, each time the word rolls around. And this reader adopts an attitude that I don't think the author had when writing. Anger. I can say that despite this defect I learned a lot. It reads more like a history of child molestation in central west Massachusetts. It could have been a good whodunnit but no. I think the book, therefore, is mistitled. That history is in fact so heinous that it was worth knowing about. There is little or nothing about Danny Couteau to speak of (the reader mispronounces even the boy's name). And the murder is NOT solved. Although the antagonist was at one point a suspect. In fact, he still lives in his mother's house. In the area where Danny was killed. The reader mispronounces the antagonist's name too. Levine (as if Jewish = Laveen instead of the French of Lavigne (Vine) in French it = La Veee-yeh. The man (when a priest) molested some 45 boys. He's got to be 80 soon. He was convicted of two instances of molestation. Did time and has since been released. Unless you really want to know the subject matter I'd pass.

From bad to horrible - RETURNED IT

I returned this book because I found the cavalier manner in which the information was provided was nothing more than a bashing of the Catholic Church and this young man. I truly disliked this book and would not recommend it to anyone interested in finding out how this child died and who may be responsible. The language was eerily similar to what was in “Spotlight.” Yet, this book is no where near the caliber of that film or book.

I hope this family finds peace. The answers sadly are not in this book.