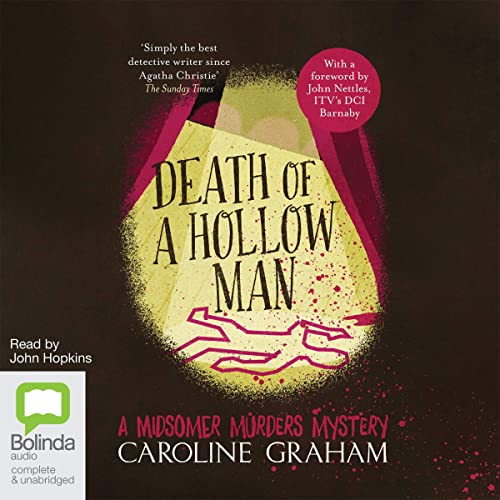 Death of a Hollow Man

Death of a Hollow Man is the second instalment in the Midsomer Murders series, featuring an exclusive foreword by John Nettles (ITV’s DCI Tom Barnaby).

Backstage nerves are fraying, and revenge is on its way. As Causton Amateur Dramatic Society prepares for the opening night of Amadeus, in the wings Esslyn Carmichael suspects his wife is having an affair with the leading man. And where better to settle scores than the stage?

Chief Inspector Tom Barnaby expects an evening of entertainment, attending only to show support for his wife. But when someone turns Esslyn’s final grand gesture into a gruesome coup de theatre, Barnaby’s investigation suddenly begins.

love this, can't wait for the next one

Can't stop listening once I push play! I'm going to reserve the next one asap.... Story beautifully written ,narration perfect. Listen and enjoy

Unable to finish this awfuly audible listen of a mid-summer murder mystery - really boring at best......removing the next listen from my wishlist ASAP