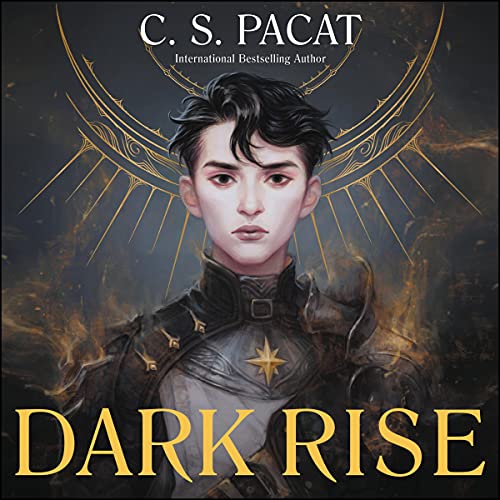 In this stunning new fantasy novel from international best-selling author C. S. Pacat, heroes and villains of a long-forgotten war are reborn and begin to draw new battle lines. This epic fantasy with high-stakes romance will sit perfectly on shelves next to beloved fantasy novels like the Infernal Devices series, the Shadow and Bone trilogy, and the Red Queen series.

Sixteen-year-old dock boy Will is on the run, pursued by the men who killed his mother. Then an old servant tells him of his destiny to fight beside the Stewards, who have sworn to protect humanity if the Dark King ever returns. Will is thrust into a world of magic, where he starts training for a vital role in the oncoming battle against the Dark.

As London is threatened and old enmities are awakened, Will must stand with the last heroes of the Light to prevent the fate that destroyed their world from returning to destroy his own.

Like V.E. Schwab’s A Darker Shade of Magic and Shelby Mahurin’s Serpent & Dove, Dark Rise is more than just high intrigue fantasy - it’s fast-paced, action-packed, and completely surprising. Listeners will love exploring the rich setting of 19th-century London. This thrilling story of friendship, deception, loyalty, and betrayal is sure to find a passionate audience of listeners.

Can’t get it out of my head, the excellence

It was just ——- just. so. Fuxkibg. good.
Reading it reminded me of reading games of thrones in high school or all the fantasy books when the odds are insurmountable and absolutely crushing and yet

Pacat is so fuxkibg good, there’s no way around it. The world building and legends, lore - you can tell she spent years researching and building, carefully, precisely,
So that each tiny piece irrevocably falls into place perfectly at the end

i CAN’T wait until you the rest. I don’t even know how it’s going to go, and that’s the best thing about a excellent book - when you can’t predict what will happen.

A punch in the throat

The YA genre has a flawed tendency to be predictable, so imagine my excitement when this title went from "oh this is nice" to "OMG WHAT ASKHHURG OLALALA IT'S SO CLEVER GODDAMNIT!!!" (I'm quoting myself verbatim here). I adore plot twists indeed, and I'm talking about the good old ones that catch you so off guard you feel a chill down your spine in the most delightful fashion.

A warning: this book lures you into a false sense of security until it hits you plainly in the throat with feelings (= pain, pain and more pain). Honourable mention to Christian Coulson for his professionalism because I would've stopped narrating the audiobook and eaten my mic. I'm still so angry at how good this book is. I love it and I wanted to love it and I love it even more now than I thought I ever would. Everything is unfair, C.S. Pacat is an evil genius and I swear my hands were trembling when I reached the last page. What a way to start a series.

"Dark Rise" is a light historical fantasy set in an 1800s London filled with ancient warriors, heroes and villains, friendship (the kind with the unwavering faith between each other), magical artifacts and the classic light vs. dark concept. The writing style is elegant and the rhythm slow but steady paced in the beginning and the middle. And then the last part defies everything you thought you knew, the plot thickens to infinity and beyond and you are left screaming and panicking until you basically overdose on all the reveals and the ending happens and you've survived but now you need the next installment with the utmost urgency.

I've read and really loved C.S. Pacat's books before, but this one was a dud for me. The story was very slow to get started and, once it did, was pretty predictable. There was one genuine surprise at the very end, but by that point I was already a bit bored of the characters and the world. It wasn't a bad book, and I'll likely read the others in the series, but it was certainly underwhelming.

The voice performance, though, was excellent--in fact, it was my favorite part of this book.

I'm gonna have goosebumps for hours! Those last four words though... wow! I can't remember the last I felt a book I read could legitimately be a movie franchise or a huge series. Especially not with lgbtq+ main characters. But it's so good, even the mainstream would have to accept them!

Holy hades Batman this was a RIDE! Oh my gosh I could touch the wood of the ship and the stone of the hall, everything described in glorious prose. GAH THE CHARACTERS!!! I would die for Violet and has anyone formed a Protect Will Kempen club because I desperately need to join. Bad Kitty - JAMES U MAGNIFICENT BASTARD my god I am. Obsessed. The entire plot turned on its head in the most wonderful way in the last few chapters and I was shrieking in a freezer remembering clues that I didn’t realize were clues and gods. This is a well written, brilliantly paced ode to classic fantasy along the lines of Tolkien and Lewis while remaining something Pacat’s own. Coulson’s narration is top notch (and he’s the cute Tom Riddle from hp 2?? Mind. Blown.) 10/10 want to buy more copies in the hope that somehow that will make book two come out faster.

This missed the mark in so many ways. Solid narration but just about everything else is lackluster. So much of the book is spent mindlessly talking in a location I found boring. Gonna re-read the Captive Prince trilogy for the good stuff.

Dark Rise is working to setup the foundations for the rest of the trilogy. The pacing started a little slow for me, but having read the Captive Prince series this was within expectations. I personally started to get jazzed and couldn’t stop listening around the mid-point. As far as Pacat’s trademark plot twists, they’re there but perhaps a little more obvious (maybe I just read too much dark fantasy lol.)

The multiple character POVs threw me off a little bit. I happen to be the kind of reader to prefer one POV, so that’s probably why the storyline was occasionally a little jerky for me. In any case, the characters are all pretty enticing and each have interesting backgrounds with the potential for badassery. I’m straight up living for the devious secrets and reveals forthcoming. 😈 Pacat did not disappoint in that category (Shocking absolutely no one.)

Shoutout to the narrator, Christian Coulson also! He was great and easy to listen to.

So. Real talk. I’m kind of hoping this someday leads to a final Narnia/LOTR-esque epic battle in some fantasy field somewhere because that’s the vibe I’m getting from this. And I could want for nothing more.

I can always forgive tropey, In fact, I enjoy it. However, this story was a slow burn with everything you expect from a generic story until the end. THEN!!! There's a reversal but absolutely no foreshadowing or indication. It's like the author just said the day before writing in the surprise reversal, 'I'm going to make up his entire back story and change it to evil' Which is explains why the protagonist has no real backstory throughout the book. It make the novel extremely weak and much less exciting.

Narrator is great, but the story is kind of a mess

The narrator is great, has distinct voices for each character.

The story is messy though. There are some twists that are good but there are also some that are laughable (in a not so good way).

The mythical creature in the story is just LOL in a bad way. That bit came out of no way and fell forced into the story. Character didn’t add much to the story.

The confrontation near in the end between two of the main characters is also a bit laughable.one of the person who hasn’t known about the stewards/dark king until recently, instantly believed that he/she is the fated one and immediately wanting to kill the other person, but seconds later she started asking the person she tried to kill why her weapon isn’t working as intended…”
Um, he just warned you seconds ago about that happening >_>

Overall the narrator was great but I wouldn’t read this or sequels (if any). The writing is just a bit messy.

Wanted to Love It

I truly love CS Pacat’s other series, but this felt like a deep dive into every YA trope there is. A classic dark vs light (good vs evil) that didn’t have the depth of character or world that I had expected from Pacat. I can’t say too much more without giving away the end, but the plot twist felt empty with the narrative choices that were made—leaving me feeling more like I was lied to rather than artfully misdirected. Wish I liked it more, but I will say, I appreciated the performance of the narrator.

the dark and twisted fantasy I never knew I needed

the narrating! the story! the characters! everything beyond words! I was drawn in so quickly and couldn't sleep till I was finished. hauntingly beautiful, perfectly tragic, with just enough hope to keep me clinging for dear life. I am utterly in love!

THIS WAS SUCH ENCHANTING STORY!!!
I was mesmerized by all the characters and felt emotionally close to them… this book just wrecked me and my soul… and I would gladly let it do that to me again and again :D
C. S. Pacat should be titled as “ Shahrazad of the 1001 Arabian nights” because I can’t wait to read another story from her!!!

The story and the narration was fabulous. All the voices done extremely well. And the story. God. Blew me away.👌 chef's kiss!