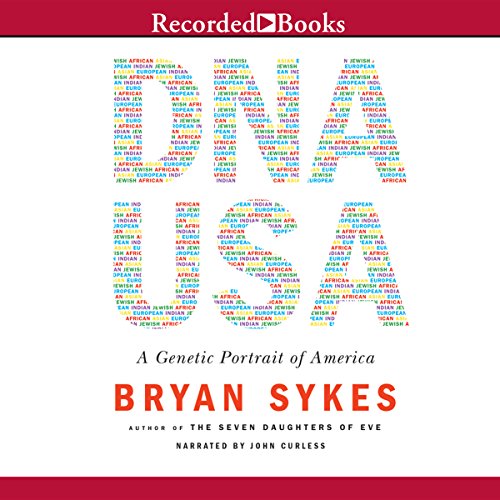 Having worked on numerous high-profile genetic investigations, including one focused on the famed Iceman of the Italian Alps, Bryan Sykes has become a premier authority on human genetics. In DNA USA, Sykes examines the unique fabric of the U.S. population - the people of one of the world’s most genetically variegated countries. His fascinating discoveries offer new insights into the biological profile of the great melting pot.

I read his Seven Daughters of Eve when it came out in print and had a wonderful time with it. So when I heard about this book, I got it. It is, for me, fascinating information and a nice stroll down geek alley. The narrator does a good job of keeping the book at a conversational pace rather than a lecturer's measure. While the book is too technical for me to drive to, it isn't so abstruse as to require a technical dictionary or a degree in BioChem to 'get it'. (I did get rather a jolt from his implication that mitochondrial DNA was co-opted as slave labor rather than the symbiotic relationship I had always heard it was; but that is part of the fun of reading this stuff.)
Anyway, if you've any interest and want some science in your life, this might be the book for you. Part One of the book is a rehash of Clovis points and stuff you've probably already seen on The History Channel or PBS, and it is said as though it were fact instead of supposition (number of warriors in the chase and women relegated to watching the children play in the water, you know--same old same old) but it paints some worthy word pictures, which was fun.
Perhaps it would have been better (to my mind) if it had broadened the sweep of information and been less specific as to groups, but I found it a worthwhile book and well worth the time and credit spent.

For me, the narrator ruined this (good!) audiobook

The book, yes. The audiobook as performed, no. The content is good but I'd recommend the Kindle version or at least WhisperSync due to the jarring performance caused by the narrator's audible gasping, long pauses, loud mouth-sounds, and poor breath control.

The lineage of names (last names, I mean) and how literal the relation/ancestry can be. That last names (and acceptable variants) really do indicate true & DNA-provable famillial connections. That may sound obvious but I always thought names were recorded like... this apocryphal tale...
A clerk at Ellis Island asks someone (who just walked off a ship from some faraway land) their first name, and are told "Esteban". The clerk says: hmm ok, "Steve" then. "Steve" how about your last name - what is it? "My last name is Přiskkeņblürndĕnfuķinænēlhœl!" Clerk: ummmhhhh.... What line of work are you in, "Steve". Steve: I make barrels. Oh! Ok. Steve Cooper - Welcome to America, go over there to get your gold bars.
I just mean that I thought names were less useful than Bryan Sykes seemed to be saying.

Would you be willing to try another one of John Curless’s performances?

Possibly, but not if it is performed the way he read for this project.

Was DNA USA worth the listening time?

In terms of content, I trust Bryan Sykes as this is not the first book I've read from him, but I enjoyed '7 Daughters...' more. This book's power is significantly diminished due to the narrator's strange performance. He does this... thing... as I type this I can't believe he was actually allowed to do it in the first place because it is so jarring and distracting. But he continually pauses at the end of passages, and then stops for 1... 2... 3... seconds and then simultaneously gasps+inhales+lipsmacks loudly as he starts the next passage. It's the audiobook version of driving down a quiet road and then having your passenger suddenly yell, "HEY! LOOK OUT!!!". It is so incredibly jarring and it happens all the time (maybe 1-2 times per minute. But a few times an hour he does it so loudly and does so after a pause long enough thay you'll check to see the book is still playing. Some may read this and think I am being petty. No, I really try to post honest and positive reviews much more than anything critical. A bad performance on the part of the narrator can really pull me out of the experience. This is 14 hours pretty deep science - of course the performance of the narrators are important. Otherwise why spend the money? Audible has top notch narrators and as they should, or we would all be listening to Librivox stuff all day. This is not a nitpick - at least not to me.

Maybe the worst part of this, is that the narrator actually has a great voice. It's a flat, somewhat nasally English accent and his pronunciation is to my liking. His ability to channel the author's personality in a very positive manner. I can't believe he was allowed to do his read of DNA USA this way though.

So, actually, is it the fault of the producer then? I don't know. But I'll need to do some research on that. This book goes down in history for me as a great book by a great author narrated by a man with a great voice but the result is a complete dud of a performance that I will just BARELY make it through. I hope to never encounter anything like this again - where a cool thing is ruined over something so dumb.

DNA USA is one of the most enjoyable audible books that I've ever listened to. The author not only both captures and maintains your interest in the very complicated subject of DNA testing results, but does so by adding important historical information and background data. His sense of humor interspersed throughout the book only makes it the more enjoyable. The icing on the cake is the excellent narration done by John Curless.

some of it was over my head, but the main theme was fascinating. i will definitely was to check my DNA after this

Enjoyed the information and it was inspiring.

This information has enlightened my understanding and look forward to reading more books written by Mr. Sykes. I have already purchased the Seven Daughters of Eve. The narrator is very good.