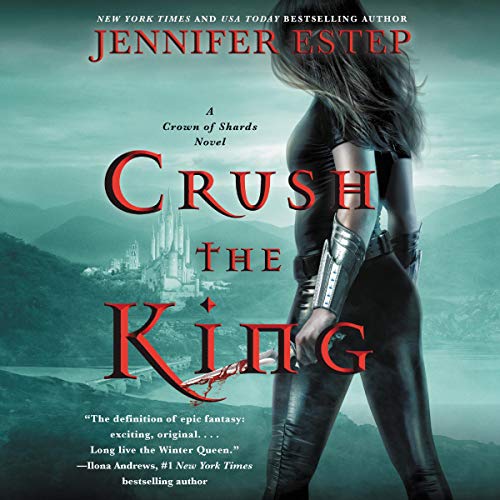 A fierce gladiator queen must face off against her enemies in an epic battle in this next thrilling installment of New York Times and USA Today best-selling author Jennifer Estep’s Crown of Shards series - an action-packed adventure full of magic, murderous machinations, courtly intrigue, and pulse-pounding romance.

Queen Everleigh Blair of Bellona has survived the mass murder of the royal family, become a fearsome warrior trained by an elite gladiator troupe, and unleashed her ability to destroy magic. After surviving yet another assassination attempt orchestrated by the conniving king of Morta, Evie has had enough. It’s time to turn the tables and take the fight to her enemies.

There is no better opportunity to strike than during the Regalia Games, a time when warriors, nobles, and royals from all the kingdoms come together to compete in various sporting events. With the help of her loyal friends, Evie goes on the attack at the Regalia, but things don’t turn out the way she hopes. Soon, she is facing a terrifying new threat, and she will have to dig deep and learn even more about her growing magic if she has any chance of defeating her foes.

Because to secure her throne and ensure her kingdom’s survival, Evie must think like a true Bellonan: She must outsmart and outwit her enemies...and crush the king.

It's an exciting book but the "Queen" is unrealistically left to fend for herself to much for it to be believable and why did all of the smartest, bravest, fastest, best at everything have to be all women? A balance of good men would have made it more enjoyable. I felt like this book did to men what men did to women . . . "only good for one thing". I would hope a world ruled by women would be better than that.

I enjoy this series

I have listened to the 3 books in this series and enjoyed all of them. I think the narrator does an excellent job she is definetly the voice of Evie.

We get it Evie is Strong!!

I was looking forward to this story but I found that some of the mystery of the second book or the struggle of the first was lacking. Evie became everything! Her man friend became her sex toy her friends except for the Ogres we basically background filler. I got tired of the internal dialogue especially during fight scene. NO one could think that much during a fight you would have to pay attention or be killed. I got tired of the flashbacks. The other thing was the constant infiltration into a supposed guarded camp. Is Evie the only competent one? This trilogy was a good story line but I felt this book was a little bit of a let down.

NUMBER OF HEARTS: 4
Crush the King follows Queen Everleigh and her friends into the annual Regalia Games and what could possibly be their final stand against the Mortans.

Wait... What.... No..... I need more pages.... *frantically clicking kindle for the next page*. This was my original reaction when I finished Crush the King.

I did enjoy this book very much but wanted more. More pages, more story, more Sullivan. I was not ready to leave yet. But I am thankful after the major angst from Protect the Prince that there was not that level of angst again. My poor heart couldn’t have handled it again.

Crush the King was a bit slow moving for me. Great story but slow. I was happy with how much Everleigh has grown over the course of these three books. And truly loved her ability to play the long game and how each piece of the puzzle fell into place.

It took me a bit to regroup and realize that this trilogy is over. But I am really, really hoping that there will be spin offs and that the publisher will realize that there are so many more stories that need to be told. I love the world that Jennifer has created and hope that we will get to come back to Bellona again soon.

Disclaimer:
I received a complimentary copy of this book from Edelweiss, NetGalley & Harper Collins/Harper Voyager in exchange for an honest review. This review is my own opinion and not a paid review.

There really isn’t much to complain about, other than I can “feel” the author a bit more than I’d like. Too much self reassurance. Maybe listening to too much criticism has her on the defensive, which is kind of understandable. Trolls be everywhere. But the plot stays entertaining and appropriately mysterious. Estep has maintained her role of leading queens of the genre. She weaves a “web” (inference intended) that I LOVE to untangle.

love the readers voice. made for a great listen.

these books were great. have listened to the series several times over. looking forward to the next one.

Crush the King by Jennifer Estep

Crush the King by Jennifer Estep
3rd book in the Crown of Shards series. Trilogy conclusion. Urban fantasy. Best read as part of the series.
Enemies are never subtle in their attempts to kill Queen Everleigh Blair of Bellona. Even though her entire family was killed, Everleigh’s friends from her Gladiator years have her back so she is not alone. It’s a good thing because the conniving King of Morta will do anything to take over the Bellona lands.
Magic, sacrifice and betrayal.

Fantastic continuation of the series. The threat is everywhere for Everleigh. She wields her compassion better than her enemies throw threats. She’s not to soft to kill if she has to but it won’t be an innocent in the crossfire.
Exciting and captivating.
And even though it’s the conclusion of the trilogy, I’m thrilled to know there more coming in the series. I can’t wait.

I alternated between a paperback copy and the audio. The narrator was excellent and made the story suspenseful and exciting.

What a way to end the series! Without getting into to much detail, I love how this Author doesn’t take the normal way out. What a refreshing end to a story.

Jennifer Estep continues to intrigue me with this series. So many interesting twists, plots, intrigue, and really a hard audible to put down.
You must start with book one, "Kill The Queen " in the series to really follow and enjoy the whole complex plot of the series.
Interestingly enough the last two chapters do bring closure. Still there is plenty of room and plot left for at the minimum one more book.
Lauren Fortgang again does a superb job of in narrating this series.

I love the entertaining story line and can recommend it to those looking for a captivating story.