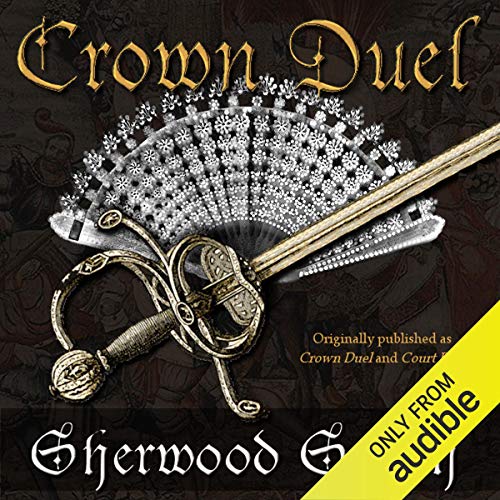 This audiobook edition of Sherwood Smith’s famous fantasy combines Crown Duel with its sequel, Court Duel, as the author originally intended. The result is an engrossing adventure of epic proportion, its two parts respectively following young Countess Meliara from blood-soaked battlefields to the peacetime political wranglings that define life in Remalna’s royal palace. Performer Emma Galvin personifies Meliara as she endures the death of her father, political revolt, and captivity, lending the countess a voice that is fittingly dour and hardened, while nevertheless sonorously regal. Galvin captures the old-world enchantment and alluring atmospherics that color Smith’s fantasy world of Sartorias-deles, while likewise betraying the heart-palpitating emotion and intrigue that propels Meliara’s plight.

Young Countess Meliara swears to her dying father that she and her brother will defend their people from the growing greed of the king.

That promise leads them into a war for which they are ill-prepared, which threatens the very people they are trying to protect. But war is simple compared to what follows, in peacetime. Meliara is summoned to live at the royal palace, where friends and enemies look alike, and intrigue fills the dance halls and the drawing rooms.

If she is to survive, Meliara must learn a whole new way of fighting - with wits and words and secret alliances. In war, at least, she knew in whom she could trust. Now she can trust no one.

Do they listen before publishing?

First off know that I really enjoy Sherwood Smith's books, but I couldn't make it past 30 minutes with this narrator. It was like listening to a 3rd grader stumbling through a book. Read 3 words...pause...another 3...pause. There was no fluidity or rhythm to anything she read. I'm going to give up and read the book.

I loved the story! Though I generally like Emma Galvin's narration, she was not at her best with this one. Too many awkward pauses in the middle of phrases, stilted reading of the old fashioned language. The story was good enough to make up for it, but I'd have loved to hear this done by a narrator (or producer) with more passion for putting out the best product. It seemed like the recording was done in too much of a hurry for it to be smooth.

I love this book. I would even say it's my favorite. The narrator isn't the best but I love being able to listen to this book as I'm doing other things, so it balances out.

love this book, not really the narrator

So I've read this book probably 10 to 15 times and I was excited to see it on Audible. I clearly love the story and I can't say enough about it. However the narrator told the story in a style that didn't work for me. She Americanized the pronunciation of Marquis (instead of Mar-key she pronounced it as Mar-quiss) which drove me crazy the entire book. and she talks very slow. These are preference things and I could work around the talking very slow by speeding up the book (I recommend x1.25). So overall I'd say give this book a shot

I'll stick to reading it myself

Bad performance is an understatement.

I love this story - I've read the book many times and had to replace it when it became too worn out. However, the reader for this audio book was horrendous. She paused many times in the middle of sentences when no punctuation indicated a pause, completely interrupting the flow of thought and story. And she spoke the entire thing in the same tone - no change of inflection or emotion in the reading at all. I couldn't even get a quarter of the way through this book before I just had to give up because the performance was so awful.

Love this author and the story. Not a fan of the performance...but once you get caught up in the story you can kind of forget about her.

What did you love best about Crown Duel?

I read this story as a teenager and loved it so much! I was delighted to find an audio version, and I was not disappointed when i listened to it. Yes, the narration is stilted in some places, but overall, it's a glorious opportunity to re-engage with this splendid tale! I also loved the 3+ hours of extra stories from Vidanric's point of view!

Sadly not as good as reading it yourself

It was a book that I absolutely loved when I read it quite a while ago, so I got it on audio for a trip but really could not stand the way it was read. I struggled through it for the sake of the story, though I thought about returning it on several occasions. Narrators voice was alright but reads with awkward pauses and mispronounced words which makes the story choppy and difficult to listen to.

Love the book, not the reading

What did you love best about Crown Duel?

I read this every couple years. I first read it when it came out, when I was in middle school. Now I read it as a comfort read. I love Sherwood Smith's world building.

Stilted, unvarying, acceptable. Her voice is fine, but she needs to relax more. There were a lot of awkward pauses and weird phrasing. For the price, I could live with it.