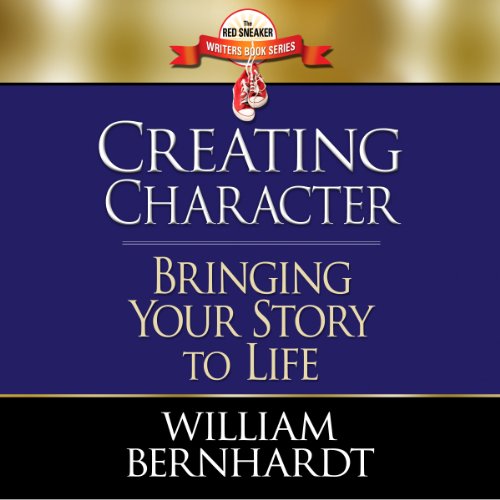 All fiction is character-driven, according to William Bernhardt, despite what you might have heard elsewhere. If your characters don’t interest readers, even the most exciting plots will fail. “Action is character,” Aristotle wrote, but what does that mean, and how can you use that fundamental principle to create dynamic fiction that will captivate readers? This audiobook explains the relationship between character and plot, and how the perfect melding of the two produces a mesmerizing story. Using examples spanning from The Odyssey to The Da Vinci Code, Bernhardt discusses the art of character creation in a direct and easily comprehended manner. The audiobook also includes exercises designed to help writers apply these ideas to their own work.

William Bernhardt is the author of more than thirty novels, including the blockbuster Ben Kincaid series of legal thrillers. Bernhardt is also one of the most sought-after writing instructors in the nation. His programs have educated many authors now published by major houses. He is the only person to have received the Southern Writers Gold Medal Award, the Royden B. Davis Distinguished Author Award (U Penn) and the H. Louise Cobb Distinguished Author Award (OSU), which is given "in recognition of an outstanding body of work that has profoundly influenced the way in which we understand ourselves and American society at large."

The Red Sneaker Writing Center is dedicated to helping writers achieve their literary goals. What is a red sneaker writer? A committed writer seeking useful instruction and guidance rather than obfuscation and attitude. Red sneakers get the job done, and so do red sneaker writers, by paying close attention to their art and craft, committing to hard work, and never quitting. Are you a red sneaker writer? If so, this book is for you.

Mr. Bernhardt is an informed, well spoken individual with a sense of humor . I learned valuable lessons from this brief—but very informative—audiobook. I would recommend it for any level writer since the author is also a successful published author with many (selling) titles to his credit; credibility not many educators in the ivory towers of university can hold claim to.

Great for the beginning Author

After finishing Creating Character I found it very helpful as long as you do the exercises it has helped me define my harassed and make them more believable which will make my first novel much better.

I give this a marginal thumbs up because it contains some good tips on character development and there aren't a lot of audiobooks on the subject. The narrator is not really professional caliber and comes off as being a little full of himself, and there's too much opinionated filler. But, when he gets to the point, he offers some good insights and advice that were helpful for me.

Covers whats needed without all the fluff. Shows what's needed for believable, interesting characters and how to make them appealing to the reader.

Loved this guide to writing chatacter!

Bernhardt has another excellent book for writers! I'll read all of them in this series on writing. This book presents essential aspects of writing highly compelling characters. It's easy to understand and perfect for enriching the writer's approach to story.

I like how this educational book opens up my mind in ways I never thought of doing, emailing the author was easy and entertaining. I like it :)

If you want to create a character that will generate a cult-like following of readers, this audio is for you. The audio gives basic instruction on how characters can be brought to life, embark on their epic journeys, change from within, comfort you while you cry, and make you laugh when you need it most. Reinforces the idea that you don't have to choose between strong characters and strong plot; they both are in a friendly working Relationship.

If you could sum up Creating Character: Bringing Your Story to Life in three words, what would they be?

William Bernhardt has created a excellent reference for authors to help them develop characters in their stories.

Have you listened to any of William Bernhardt’s other performances before? How does this one compare?

They are all great.

What did you learn from Creating Character: Bringing Your Story to Life that you would use in your daily life?

How to make my characters stand out.

Great advice from a successful author

No fluff, to the point advice for building memorable characters. I highly recommend this to anyone seeking to write a novel people will actually read.