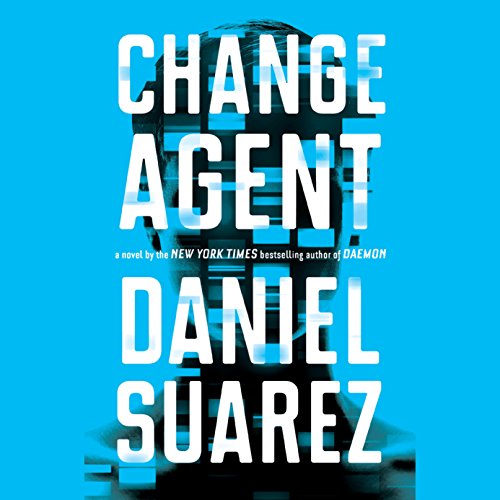 On a crowded train platform, Interpol agent Kenneth Durand feels the sting of a needle - and his transformation begins....

In 2045 Kenneth Durand leads Interpol's most effective team against genetic crime, hunting down black market labs that perform "vanity edits" on human embryos for a price. These illegal procedures augment embryos in ways that are rapidly accelerating human evolution - preying on human-trafficking victims to experiment and advance their technology.

With the worlds of genetic crime and human trafficking converging, Durand and his fellow Interpol agents discover that one figure looms behind it all: Marcus Demang Wyckes, leader of a powerful and sophisticated cartel known as the Huli jing.

But the Huli jing have identified Durand, too. After being forcibly dosed with a radical new change agent, Durand wakes from a coma weeks later to find he's been genetically transformed into someone else - his most wanted suspect: Wyckes.

Now a fugitive, pursued through the genetic underworld by his former colleagues and the police, Durand is determined to restore his original DNA by locating the source of the mysterious - and highly valuable - change agent. But Durand hasn't anticipated just how difficult locating his enemy will be. With the technology to genetically edit the living, Wyckes and his Huli jing could be anyone and everyone - and they have plans to undermine identity itself.

A terrifying look into our future

I really enjoyed Daemon by Daniel Suarez so when I saw that Change Agent was coming out, I had to get it. I pre-ordered it from Audible (something I rarely do) and the day that it arrived I was lucky that I was just about to finish the last book I started.

Change Agent is a story about Kenneth Durand an Interpol agent who is mysteriously changed into someone that he is not. Not just a small change either, but a full change. So much so that he quickly realizes that he is a wanted man and that this will forever change the way that the police will be able to solve crimes.

There are two authors that I read that remind me of Michael Crichton. Douglas E Richards and Daniel Suarez. Suarez is able to weave what is going on today with what he thinks will come in the future and it's terrifying. I work in a technology firm and he's not wrong with what he's thinking. I wouldn't be surprised if a lot of what was written in Change Agent comes true at one time or another.

Durand as a character allowed the reader to follow along with someone as their own opinions of people and things they fought for so long was changing. Kenneth grew many times throughout Change Agent and really became one of the more dynamic characters I've read in a long time.

The overall story was one of the best I've read this year. It kept me wondering throughout and I honestly couldn't put this book down. I kept saying "one more chapter" late into the night. Each chapter brought me closer to the end, but I promise that this book will have a hold on my mind for a while.

A fast-paced technothriller on par with every Crichton novel I've ever read, maybe even a little more terrifying. Suarez took things that are real today and showed us what could happen in the future if we're not careful.

I was very excited about the concepts being portrayed in this book and have been a fan of the author for awhile. However, after some great setup the plot simply meanders from place to place and secondary characters have little to no development enough to care about anyone's fate. The climax of the book felt like a rush to the finish with the protagonist, being presented with an enormous moral and utilitarian dilemma, still acting on his own superficial self interests. A disappointing and predictable end to a book with a very cutting edge concept.

I loved Daemon, Freedom and Kill Decision but this one just didn't work for me. I did not find the Durand character likable or believable and really didn't care what happened to him. I found myself switching to music on the drive home after chapters ended.

Still wrapping my head around it...

I'm a huge fan of Suarez previous work, and his set of Daemon and Freedom TM is my favorite story. That being said, I must say I never got attached to the main character in this book. He is a bit of a bleeding heart, who I personally would never see eye to eye with... but I'm leaving that out of my criticism here, being that's a personal taste thing.
It's the tactical errors he makes I'm mostly bothered by. I can't divulge without giving up plot points, but I will say he places himself in some precarious positions through sheer stupidity, and blind faith.
I would have enjoyed a little more development from the partner's (Yi) investigative side.
With the bleeding heart male figure, and women who lead by force, and the main characters metamorphosis resembling a very 'active' Hollywood Star currently making movies at a feverish pace (you smell what I'm cookin?) it Feels as if it were written for the big screen, which I'm hoping for Suarez sake that happens. He absolutely deserves it. I just wish someone would make a big budget version of Daemon for the big screen instead.

Change Agent had the same technical style has the other books from Mr. Suarez. He gives you just enough of world building details without boring you. The problem is unlike his other books, there aren't enough huge battles (practically none at the climax). There are also too many characters in this story and most of them don't play much of a role to the story.

Probably Daemon or Freedom TM just so I can forget about this mediocre work.

What does Jeff Gurner bring to the story that you wouldn’t experience if you just read the book?

Mr. Gurner always brings a solid performance to everything I have heard, including Change Agent. He was held back by the lack action sequences in the book and couldn't really make it as interesting as previous novels from Mr. Suarez.

Do you think Change Agent needs a follow-up book? Why or why not?

No. The story ties up pretty well at the end, to the disappointment of most readers, I'm afraid.

Deathless meat will be a thing.

I loved all his other works

I loved everything else Suarez has written. And the elements are here but it just does not come together. A lot of long dialogs describing an scene or item. Also he uses the concierge/pageant/show room floor method of story telling way too many times.

Good book, not enough thrill though

took a bit to get into, but was worth it in the end. if you try to compare it to his other books, don't.

Once I began I couldn't stop listening. I finished the entire book in two sittings interrupted only by my daily dose of sleep. Both the story and the performance were superb. The author's familiarity with various ethnicities was greatly appreciated. Mr Suarez succeeded in converting me into a science fiction fan, a genre I was previously averse to due to my reading a couple of scientifically poor science fiction novels. BTW I heard about the author for the first time through an interview with Mr. Leo Laporte on his Triangulation podcast.

If you've liked other Suarez books, you'll probably like this one, his other books have been futuristic but take place in our timeline, this one takes place in 2045 in the black market of gene editing. I've read all his other published books and really liked this one.

I loved the progression of the story, but the end felt rushed to the degree that when the antagonist finally gets his due, its anticlimactic. Bummer.

Some 30 years down the road, privacy has become a thing of the past, and genetic editing of embryos a Trillion Dollar business. Ethical and legal edits heal genetic defects. But some parents want more...

Suarez' main character, whose fate we follow, works with Interpol and against an international biohacking cartell. Needless to say - he gets into a lot of highly entertaining trouble (entertaining for us, his opinion might differ). But that provides just a thread to Keep us involved: Suarez' real star is the highly evolved future world which reflects the consequences of leading-edge technologies, both in the biotech as in the computer field. Highly plausible as well as highly surprising - and Suarez delivers the details and implications masterfully.

The result is a highly entertaining science thriller - science fiction in the best sense, with a heavy emphasize on ideas. This audio book is filled to the brink with stuff worth thinking about, ethical and social condundrums by the dozen. While the future will certainly look different from what Suarez imagined - it always does, after all -, a lot of the issues and questions he sheds light on will hugely influence it.

A good thriller, well told, but first and foremost a superb reflection on what potentials our recent biotech discoveries hold.

A good and thrilling mix of sci and fi

Awful voice. Great story. What a shame. Much better in German. Go für the German version of you can. It's much more natural.

versatile voice. good speed even for non us or British native listeners.
the story too soon turns out to end a classic obvious way . happy end for some.

This book is as awesome as the other ones were already. You should defiantly hear it. With brilliant thoughts how the future could look like and great details.