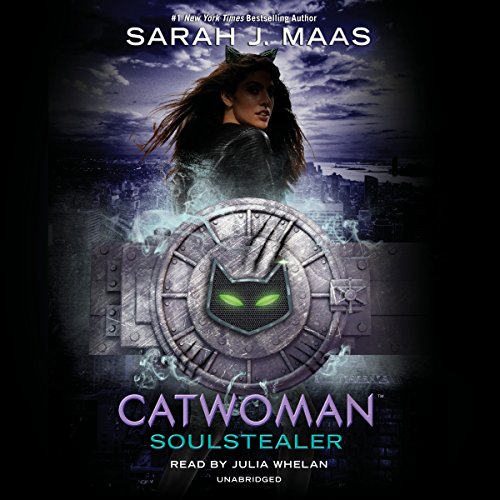 When the Bat's away, the Cat will play. It's time to see how many lives this cat really has.

Two years after escaping Gotham City's slums, Selina Kyle returns as the mysterious and wealthy Holly Vanderhees. She quickly discovers that with Batman off on a vital mission, the city looks ripe for the taking.

Meanwhile, Luke Fox wants to prove that as Batwing he has what it takes to help people. He targets a new thief on the prowl who has teamed up with Poison Ivy and Harley Quinn. Together, they are wreaking havoc. This Catwoman is clever - she may be Batwing's undoing.

In this third DC Icons book, Selina is playing a desperate game of cat and mouse, forming unexpected friendships, and entangling herself with Batwing by night and her devilishly handsome neighbor Luke Fox by day. But with a dangerous threat from the past on her tail, will she be able to pull off the heist that's closest to her heart?

"Maas has a gift for crafting fierce female protagonists.... An epic shoutout to all the bad girls who know how to have fun." (Kirkus Reviews, starred review)

"A Catwoman story unlike anything you've seen before." (Nerdist)

"Maas has a gift for crafting fierce female protagonists.... An epic shoutout to all the bad girls who know how to have fun." (Kirkus Reviews)

What a refreshing story for catwoman! I really found myself invested in this story and found it really original and entertaining. I would recommend this story to any and all book lovers, DC fans, and just open minded people that are not quick to judge negatively now or days with what you see with most common reviewers.

I found the story to be really good and a great end game that made it all worth listening to. Makes me wish why there are not more books out there for catwoman, I mean not in comic form.

Okay. I can look past that is, in a different DC universe and things are really different. I found at times that the only reason I was still listing was because the voice talent really was good. The story on the other hand 75% okay and 25% pure trash. This book was more written for a person that thinks even a billionaire black guy is oppressed by society, and a female is always a sex symbol and has to fight off this stereotype. The story itself fell really flat, I found myself wondering how batwing could do anything with such a crippling problem , and all he did all book long was get his butt kicked ( he did not win 1 fight). Some will love it but I think more for the stellar vocal performance than the story itself.

I love the complexity of this catwoman, she has real heart and a truly beautiful motive for her crimes.
it made a rather shallow character (depending on which depiction) a much more fleshed out storyline that made her relatable and made you cheer her own...she is definitely an anti-hero in this version and a bonified bad ass with a heart of gold.

what were they thinking

The male bashing goes on for pages and pages. Her disgust with the police force drips from her narrative not even the characters point of view.

Would have been a great stand alone story, didn't have much linking the selina character to Catwoman.

As a batcat fam the pairing in the book got on my nerves. I love Sarah's storytelling tho so I kept on going.

While occasionally fun and exciting, Catwoman: Soulstealer feels more like a Tumblr fan-fiction rather than an honest portrayal of the IP it bases itself on. The characters feel more like props to service a plot that takes way too long to surface.

If you want to read a book with kickass female characters, topics of social justice, and characters based off the rich pantheon of the DC Universe, read Wonder Woman: Warbringer instead.

I LOVE SJM, but this was a huge let down for me.
What irked me most of all (other than the lack of plot except for the first and last hours and exhausting political agenda) was the fact that Luke was an idiot with terrible detective skills and he has no business working with Bruce Wayne. Not to mention, Bruce is depicted as a pretty big jerk himself.
I don't want to spoil anything, but there was a specific theme that was brought up several times, while drawing attention to it and Luke paid no mind to it.
Additionally, the cover bothers me because it doesn't accurately represent anything about how catwoman is described in the book, but now I'm just nitpicking.
If you read DC comics, I would recommend the Wonder Woman book in this series first (it is great) and the Batman one second. You will likely be disappointed by this installment.

great book and great voice over! I enjoyed it so m

i enjoyed it so much I didnt want to finish it honestly. The voice over was great and the storyline was original while still being true to the personalities of the comic characters.

As a huge Catwoman fan, I love this story. Yes, some liberties were taken with the character but they are forgivable because the story itself is so compelling.

Julia Whelan’s performance was amazing. This is one of two books I’ve heard her read and hope to listen to many more.

I wasn't sure I would be so enthralled by this tale except that I love Sarah J Maas. She did not disappoint. I have always enjoyed the Batman movies, but had never read any books. I loved the delicately woven story of relationships between each of the characters.