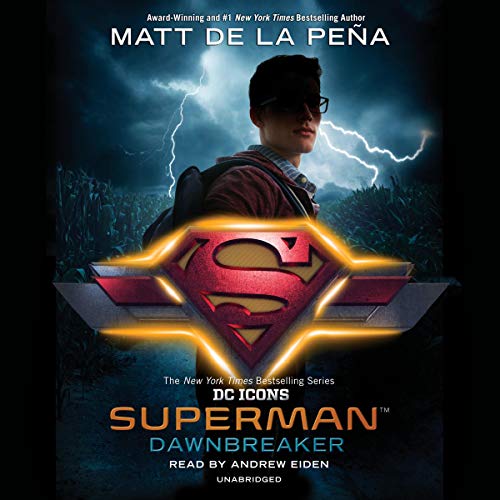 When the dawn breaks, a hero rises.

His power is beyond imagining.

Clark Kent has always been faster, stronger - better - than everyone around him. But he wasn't raised to show off, and drawing attention to himself could be dangerous. Plus, it's not like he's earned his powers...yet.

But power comes with a price.

Lately, it's difficult to hold back and keep his heroics in the shadows. When Clark follows the sound of a girl crying, he comes across Gloria Alvarez and discovers a dark secret lurking in Smallville. Turns out, Clark's not the only one hiding something.

Teaming up with his best friend, Lana Lang, he throws himself into the pursuit of the truth.

What evil lies below the surface of his small town? And what will it cost Clark to learn about his past as he steps into the light to become the future Man of Steel?

Because before he can save the world, he must save Smallville.

"A wonderful, bold interpretation of a DC icon that aspires to embrace all readers, new and old." (Kirkus Reviews)

“In his brilliant take on Superman, de la Peña shows us that there’s a chance we’ll all need to step up like Clark Kent - with or without a cape.” (Jason Reynolds, New York Times best-selling author of Miles Morales: Spider-Man and Long Way Down)

“Matt de la Peña’s Superman is the quintessential American alien. Despite being caught between two worlds, he’s everything we love about the Man of Steel: courageous, compassionate, and full of hope.” (Gene Luen Yang, author of New Super-Man and National Ambassador for Young People’s Literature)

Bashed in the face with an intersectional 2X4

When I ordered the book I knew the author leaned left and that he would create a story that argued for his political views.

He didn’t write a story. He wrote about his political views and stuck a story on top of them It wasn’t subtle. It wasn’t organic. It wasn’t even professional

Star Trek, marvel, dc. They’ve always moved the envelope and presented a certain view of the world But they also wrote great stories. De la Pena didn’t. He could have But he’s just trying too hard

But it does not seemingly need tolkienesque prose. It just needs an intersectional club.

I buy books like this for entertainment not to have a political agenda pushed down my throat.

I listen to audio books while commuting to and from work to relax. I selected this book because I was looking for something light, something to get me out of my head. This book has alot of socially charged content and alot of the authors personal views. Not what I was expecting from a Superman book. I don't mind when I'm looking for a book to inspire an internal debate or gain political perspective. This is a book about Superman, not a platform for the author to indoctrinate his views on to the readers. I'm not agreeing or disagreeing with the opinions of the author, just stating that this was disappointing.

Good story minus the ignorant extreme of pushing one side of a very complex political agenda. Could have been a great book, except for the writers extremely one sided viewpoint into a very complex matter. If you are a blind close minded liberal or conservative, you will with love or hate this book.

The reader is adequate. Thee story is not a story as much as social commentary about how illegal aliens are mistreated and why anyone who believes in borders and legal immigration are heartless and a bigot.

I would not be recommended this book. I have more to say but it won't submit more. Leon Powell

This volume of the DC Icons series focused on the short period of time when Clark's powers are manifesting and his first appearance as Superman. It's interesting to see that, arguably, the greatest hero so far spotlighted in this series has the shortest story to tell. The story is fairly simple and adds little to the mythos. We do get angsty Clark, would be reporter Lana Lang, kindly Ma and Pa Kent. They even work in a young Lex Luthor acting suspiciously, but not really doing much else. They even name drop Lois Lane at one point. All the parts are in place, and yet, it falls flat for me. It seemed to me that the author was much more interested in the plight of the local Smallville Hispanic population, both legal and illegal, than the Superman story. Yes, I get that Clark is the poster child for immigrants and I give credit to the writer for playing off of that. The story had potential, but I personally think it needed more development before being written. This is not, by any means, a bad story. It's just kind of average for me. This fourth volume of the DC Icons series is the weakest of the bunch but still enjoyable for what it is. In my opinion, that would be a back up story in any Superman comic. So, a mild recommendation.

I've been a Audible subscriber for several years, I've ordered and listen to many, many books over this time period and have never felt the need to return a book that I had picked out...... until now! Has truly ruined Superman for me! The Author spends the entire book pushing his political agenda onto the reader, while at the same time turning Superman into a namby-pamby pushover. What a waste of time listing to this pile of %#@%! Please DC never give this guy to rights to sell another story that wrecks one of beloved heroes!

The narrator brings you into the story as you watch Kal-el decide to be a hero or just be a passerby.

way to much of pushing your political agenda

too much sob story about illegal immigrants . it feels like the writer is just trying to get you to sympathize with his political views.