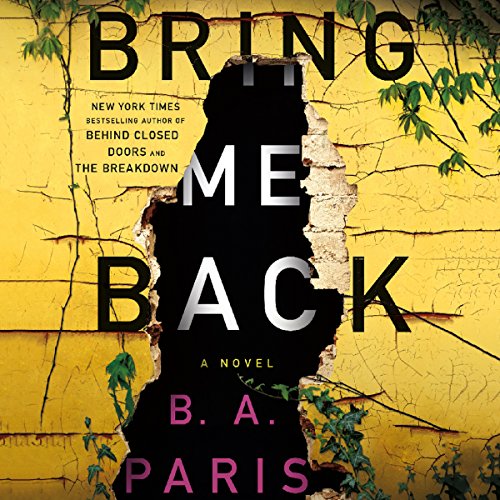 The new twisty, gripping audiobook from B. A. Paris, the author of the instant New York Times and USA Today best-selling titles Behind Closed Doors and The Breakdown

“We’re in a new Golden Age of suspense writing now, because of amazing books like Bring Me Back, and I for one am loving it.” (Lee Child)

She went missing. He moved on. A whole world of secrets remained - until now.

Finn and Layla are young, in love, and on vacation. They’re driving along the highway when Finn decides to stop at a service station to use the restroom. He hops out of the car, locks the doors behind him, and goes inside. When he returns Layla is gone - never to be seen again. That is the story Finn told to the police. But it is not the whole story.

Ten years later Finn is engaged to Layla’s sister, Ellen. Their shared grief over what happened to Layla drew them close, and now they intend to remain together. Still, there’s something about Ellen that Finn has never fully understood. His heart wants to believe that she is the one for him...even though a sixth sense tells him not to trust her.

Then, not long before he and Ellen are to be married, Finn gets a phone call. Someone from his past has seen Layla - hiding in plain sight. There are other odd occurrences: long-lost items from Layla’s past that keep turning up around Finn and Ellen’s house. Emails from strangers who seem to know too much. Secret messages, clues, warnings. If Layla is alive - and on Finn’s trail - what does she want? And how much does she know?

A tour de force of psychological suspense, Bring Me Back will have listeners questioning everything and everyone until its stunning climax.

“This tour de force of psychological suspense will leave you questioning everything.” (Good Morning America)

The plot was boring and not credible. The characters are not even likeable. Very disappointing. Very repetitive. It's not like BA Paris' other books.

Is something happening here?

Because what it is ain’t exactly clear.
I can’t remember the last time I listened to an audiobook where, for the first 80 percent of the story, absolutely nothing happens.
I enjoyed Paris’s Behind Closed Doors-suspenseful, engaging characters, full of action. I kind of liked The Break Down- some interesting plot twists. But Bring Me Back? Please, bring ME back out of this book and put me somewhere where I can watch paint dry.
Summary, no spoilers. Finn had a girlfriend, Layla. Layla has red hair and also has a sister, Ellen. Layla disappears one cold winter’s night in France. Twelve years later, Finn is happily engaged to Ellen. Ellen has an obsession with Russian nesting dolls. A Russian doll shows up at the house. A possible sighting of Layla (of a woman with red hair) plus Russian doll equals OMG! Layla’s back! Layla emails Finn. I’m coming for you/Ellen. Finn doesn’t know what to do. Everything stays stagnant as the emails sound more and more ridiculous (you have three days left. Two days. One day). More dolls show up.
It is benign and boring. It’s downhill from there. I give the book two stars because 1. I finished it; and 2. Eventually some stuff happens.
I didn’t really enjoy this book and I don’t think I would choose to read it again if I had the time and credit back. I hope for better from BA Paris’s next offering. Not recommended, because it’s just not that good.
As for the narration, I love Cathleen McCarron, but she has so little to work with in this novel.

Should have read that other review

Whoever said nothing happens for the first 80% of the book is right. I am halfway through and so completely bored I dont think I can finish it.

Mind scrambling but the others are better

Paris writes mind scramblers: you’re dizzy and questioning your own memory by the end. This book is no exception yet the story was boring. It was not gripping, heart pumping or page turning like the previous 2. I fell asleep three times. It was a bore and a painful, tedious finish by the end and encompasses everything that I consider bad writing: lots of telling instead of showing—I loathe long monologue confessions. The ending was half surprising.

I hated everything about this book. I’m ashamed I even finished it. There’s not a single character that is like able. The plot is repetitive and unbelievable. I can’t think of anything I liked about it. Truly an awful book.

It’s no behind closed doors!

Anticipated this book for so long—it was fine, but failed to hook in the same way as behind closed doors (one of my all time favorites of the hundreds of psychological thrillers out there)

This was awful, from beginning to end. I can’t believe I finished it. It was a chore.

“The Breakdown” and “Behind Closed Closed Doors” were so well written that I read the endings numerous times. “Bring Me Back” is poorly written and a total waste of time and money. Although the readers and production are flawless, the book is awful. No wonder the audible book was so cheap.

This book was good, but not as good as her first two. I was hoping the same lady would read this book. I did finsh it as it got better towards the end. I still listen to her first two books and enjoy them very much. I'm sure I won't listen to this one again.

worst book ever...couldn't finish the drivel it was terrible. I could NEVER recommend this book

Round and round the mulberry bush ...

I've listened to the other 2 B.A. Paris novels, and even though they are not great literature, they were a good listen. This one is boring and far-fetched. It is basically about the constantly changing suspicions and musings of Finn. As with every bad thriller, the reader keeps wondering why no sensible idea seems to cross the protagonist's mind. I'd recommend you find something more thrilling to listen to.

very good story, so different, weird and psycho. I enjoyed it and heard very fast. I will deffinitely suggest it to others.