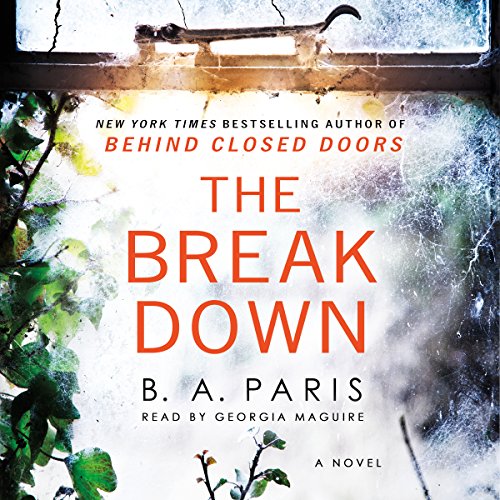 When your friend drops a "what book should I bring on my vacation?" poll on Facebook...add comment: The Breakdown. It’s everything I love in a psychological suspense: It draws you in right away, then launches you up, down, and sideways through twists and turns. Georgia Maguire’s lovely English voice is so easy on the ears, and her performance is at once heartbreaking and breathtaking. I’m still sorting out my emotions. Without spoiling anything for you, let me just say this: It’ll make you think twice about doubting your instincts. —Erin, Audible Editor

Named One of the Most Anticipated Thriller Novels of 2017 by Bustle!

The newest propulsive audiobook from the author of New York Times and USA Today instant best seller Behind Closed Doors.

If you can't trust yourself, who can you trust?

Cass is having a hard time since the night she saw the car in the woods, on the winding rural road, in the middle of a downpour, with the woman sitting inside - the woman who was killed. She's been trying to put the crime out of her mind; what could she have done, really? It's a dangerous road to be on in the middle of a storm. Her husband would be furious if he knew she'd broken her promise not to take that shortcut home. And she probably would only have been hurt herself if she'd stopped.

But since then, she's been forgetting every little thing: where she left the car, if she took her pills, the alarm code, why she ordered a pram when she doesn't have a baby.

The only thing she can't forget is that woman, the woman she might have saved, and the terrible nagging guilt.

Or the silent calls she's receiving, or the feeling that someone's watching her...

You won't be able to hit pause on B. A. Paris' The Breakdown, the next chilling audiobook from the best-selling author of Behind Closed Doors.

I enjoyed listening to this book so much that I listened to it as if it was a race. I was so impatient to know what was going to happen. The suspense is thrilling, our emotions are turned upside down, we feel very much sympathy for the main character and the situations are very intriguing. I already had loved listening to the dilemma, and behind closed doors, so I can say that this author is definitely a very good one.

This is the second book by B.A. Paris whose debut was "Behind Closed Doors". I have to say that book was good but it lost my attention at points. But the ending was well worth it.
This new book will have you from the first page. Imagine you have the perfect life and one night driving past a broken down vehicle causes you to start to lose your memory. Like how to work a microwave or dishwasher, items arriving you never ordered but you did.
This book will keep you till the end and the ending won't let you down.
I have been on such a dry spell, must have started 10 books that had high ratings but were not that good. THIS IS THE BEST BOOK OF 2017 HANDS DOWN.

this book is awesome. I seriously sat in the costco parking lot for over an hour.

I tore through it within a few days

The Breakdown is quite the book! I’ll be honest in that the first 2/3 of the book I was wondering when we were going to get down to the action. That last 1/3 of the book makes up for a bit of a slower pace in the beginning of the book. BA Paris really lays a nice foundation for the story and the readers, or listeners in my case, are left wondering if Cass is really losing it!

If you’ve read BA Paris’s first book, Behind Closed Doors, and you liked it, this setup is extremely similar. She seems to spend most of the book setting up that gripping ending. The question is can you make it through nearly 2/3 of a book that is ok, and has somewhat of a slow pace when you’re reading a thriller… that’s question you should ask yourself. For me, I’m really happy I stuck with this book. Let me tell you what I enjoyed…

Since I was listening to an audiobook, one of the most significant things for me is the narrator. The narrator, Georgia Maguire did an outstanding job. I adored her British accent. Besides just have a pleasing voice she delivered the different characters very well. Maguire added the perfect amount of tension and fear to her voice needed. She was able to convey Cass’s confusion throughout the book perfectly. One of the best narrations I’ve listened to!

One of my main problems with the story though was Cass herself. I wanted her to be stronger instead of this sniveling and quivering mess that she was. I think it’s why I really enjoyed the last third of the book… it was filled with tension and Cass seemed to remember who she was. However, this story was so extremely relatable and it wasn’t really far-fetched. Cass’s fears and life concerns were softly unraveled like the thread in clothing.

Just like in Behind Closed Doors, there was a twist, just like that! I was left reeling and I wasn’t able to consume this book quickly enough. I was entranced and it was utterly addictive! I loved the ending! There were parts of the conclusion that really left me flabbergasted… I didn’t see it coming! Although it wasn’t exactly surprising, you could feel the buildup, but it was the acts themselves that were surprising.

Even when the book was a bit slower, than I would have preferred with a thriller, I found I tore through it within a few days. I found myself listening quicker and quicker so I could get to the ending. That buildup was seriously intense and once BA Paris hit her pace, she didn’t let up until it was over. Once the last word was read to me, I found I wanted more. I wanted to know what happened afterward to all the people. I was hoping for good things for Cass and possibly John. What happens to Matthew, or Alex? I see that as a good sign… I enjoyed the book!

Audiobook was purchased for review by ABR

I quit this a few minutes in, then went back and stayed. It's a *beach read;* what I call an airport pick-up book: not spectacular but it becomes easy on the ears and comfortable. It has that settle in and go along quality that is easy to drift with. The story itself is transparent, easily solved far before the author reveals the facts, but lends itself to pleasantly picturing the events without effort as long as you leave logic in your pocket. Sometimes the perfect book is the one you can pick up, set down, pick up again all without worrying about a book mark.

Wanted to love it

I absolutely loved "Behind Closed Doors," and while the narration for this one was equally good, the story was not. Similar build-up, just much less believable or exciting. The build-up was slow and boring. The motives, which were revealed after several painful hours at 1.5x, were cliché and boring. I felt no connection whatsoever to the main character/narrator and was disappointed overall.

I tried for several hours since it started off very promising and the narration is impeccable. But the protagonist is pathetic with too much self loathing over and over again. Parts of this story are frustrating as opposed to suspenseful. Just couldn't go on.

I hate to give a book a poor review but this book is really boring. I finished it only because I didn't want to completely waste my money. The story is so repetitive. I had the whole thing figured out within the first chapter. I'm going to try the author's other book because it sounds much more interesting but I would not recommend this book.

This book was awful, the story was far fetched and ridiculous. Trying to "convince" someone their mentally ill is ridiculous. That's pretty much the story- sorry. There was no significant point to the story. No exciting twists or turns just some dumb woman thinking she's going crazy because she thinks she's forgetting everything and a "silent caller" which by the time the story mentions the calls for the 500th time you're so over it. I can't even begin to convince someone not to waste a credit on this. How it was such an anticipated book- I don't know.

This audiobook was such a disappointment. It was so incredibly predictable and I kept listening in hopes of being wrong but it was transparent from the very beginning. I'm sorry I wasted my credit on this book.

Another Girl on the Train it isn't!

Trite, contrived and boring. Just finished and I'm still waiting for it to warm up. Awful jut awful. Save your credits.

who gets carried away and seems to react out of all proportion is not totally credible, but certainly necessary for this story. The ending is a nice twist, but throughout the story I tended to get annoyed with the whiny voice of the heroine. Georgia Maguire's voice fits in well, but at times it is a little hard to go on with the listening. On the whole fine for a rainy day.

Liked it. The main character has so much depth that you feel you know her.

spent a nice evening at the opera but couldn't wait to get home to finish this audible book..
I know shame in me...or shame on Audible for producing such addictive thrilling speaking books

Like "Behind Closed Doors" I was captivated. I was also excited to find out that my suspicions were right, though I was thrown a few times.

at first I found it a bit hard to get into the story. but once I got the hang of the voice and the characters i just couldn't put it down. the speaker did a great job. and the end....very good. I did suspect the wrong person so I was quite surprised by how it ended. I definitely recommend the breakdown.

It's a really good (audio) book. It's thrilling and I loved it.
In the middle of the book I was pretty sure what's going on but it didn't make the story less interesting.
I can recommend that book 100%.