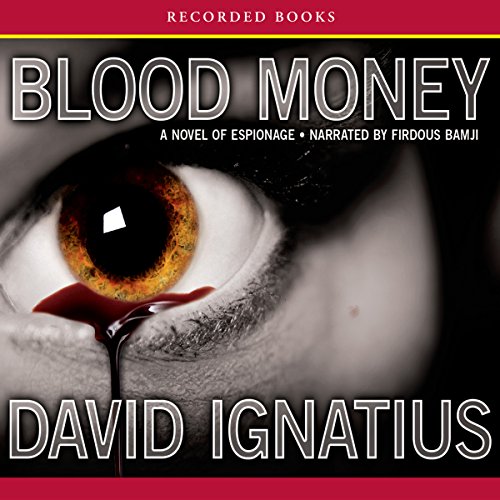 A prize-winning columnist for the Washington Post, David Ignatius penned this riveting suspense tale ripped from today’s headlines. Deep within Pakistan’s borders, a secret CIA team is being systematically dismantled by a cunning enemy. Soon, Sophie Marx, a young, ambitious agent, is on the ground searching for answers. But as she gets closer to the truth, she suffers a devastating betrayal and must risk more than her life to save the world from a terrifying fate.

A Walk Into The Shadows

It's a shame that the cover and title of Bloodmoney suggest a run of the mill potboiler when Bloodmoney's pleasures are so much headier: Ignatius gives us a dizzyingly fun but convincing tour of some of the most mysterious subjects in the modern world in modern Pakistan, the CIA and the world of high finance. While it is fictional, Ignatius paints a conspiracy with a startling ring of truth by portraying a dark intersection between these worlds. It helps that he fills Bloodmoney with engaging, believable characters - from the colorful CIA chief to the brusque boss of a CIA shadow organization to the pious Pakistani militant to the slyly witty ISI chief, each character is fully realized enough to evoke a separate world. The ultimate effect is a story that shows the human consequences of labyrinthine, secretive organizations with the heady joy of The Wire.

Firdous Bamji's reading is masterful - he covers plot exposition with a cool/unaffected tone in keeping with the story, and he acts the dialogue to perfection, giving real life to each character. "His" CIA and ISI chiefs are some of the most well acted performances in my recent listens.

I don't write reviews often, all I can say is this is perhaps the best thriller I've listened to in quite some time. It blends the far east, espionage, the recent financial tumult without any of the sound effects or dual performers I've recent been exposed to in other productions. Buy it and enjoy!

Didn't work for me

Stopped early on when the first character we really got to know was being tortured. Don't like such violence and it hadn't hung together enough by that time to keep going in spite of it. It seemed well written although I wondered if it was going to be anti-American, but didn't listen long enough to find out for sure.

Good Plot - Too Much Narrative

The characterizations and storyline are imaginative and well-conceived. The author tends to extend the narrative beyond what is necessary to carry the plot. Lots of double-dealing and intrigue. The idea of a rogue secret service organization is original. Worth the time to listen to it. The narrator, Firdous Bamji does a good job bringing out the characterizations.

Why the Middle East Hates Us

Where does Bloodmoney rank among all the audiobooks you’ve listened to so far?

This hit the top of my favorites list. This portrait of a counter-terrorist operation has a multitude of believable details, and flows forward with the inexorability of tragedy. Not that it's depressing or a downer. Not at all. In fact, this book is uplifting. We see how revenge is redundant because the bad guys bring themselves down. it portrays the players in this action as human beings, and this means there is hope for the world. The geopolitical realities of AFghanistan and Pakistan, and the role of the US in the mess over there, is illuminated through complicated but realistic characters. The author clearly knows the character flaws of the many nationalities involved, but also the beauty of each culture, and the tragic misunderstandings caused by these culture clashes.

The plot was riveting. The scenery changed constantly but not in a hard-to-follow way. Very easy to listen to because you always know where your are, whether LA or Dubai or Islamabad, and you always know who is speaking, thanks to the brilliant dialogue and amazing acting job of the narrator. There's plenty of action but it never deviates into farce or action for the sake of action. The suspense comes from seeing the various characters weaving complex plots, each trying to advance his mission. Best of all, good and evil mingle amid many characters of many nationalities. Each character has a motive that makes him or her understandable. Just when you think you've identified the bad guys, the plot shifts.

Have you listened to any of Firdous Bamji’s other performances before? How does this one compare?

I'm so glad I listened to this on audiotape. It takes you right out of the story if the narrator mispronounces the foreign language parts or gets the accents wrong. This narrator gets everything right here. In addition, his voice changes to suit each character without ever sounding absurd. He even does the female voices really well, without sounding falsetto.

Absolutely. This book is dangerous to your health.

It's rare to find a believable female character in a spy novel. Often they have the face of a model, the body of a pole dancer, the psyche of a nymphomaniac, the endurance of a Navy Seal, the shooting arm of a sniper, etc etc. Female spies, according to many novels, usually dress in clinging silk and ultra-high heels that then become assassin's weapons. Clearly, such authors have no clue what espionage operatives really cultivate, namely, anonymity and the ability to blend in. This novel has a believable female character who is not extreme in any of those ways. She is not perfect, nor does she have ice water in her veins. What she has is a somewhat flawed character like all of us, a rather checkered past all her own, and an admirable ability to see through the lies and deceptions of others.

Would you try another book from David Ignatius and/or Firdous Bamji?

What was most disappointing about David Ignatius’s story?

Not reader's fault. He just didn't have anything to work with.

Out of 400 or so Audible books I have purchased, this one would have to rank in the Worst 5 list, maybe even #1. It's so slow as to be painful. I would best describe it as the Ambien of Audible. If you can't sleep, put this one on and you'll be in lalaland very shortly. The story itself could have been quite good, but it is destroyed by conversation. I mean, NOTHING happens! It's just conversation after conversation followed by train of thought. No need to worry about giving away spoilers with this one - there is nothing to give away.

held me until the end

Great story until the end. So much of the story rang true, but the end was the only down part of the story. I would still recommend this book for a good story.

I really enjoyed this audio book. The story is exciting with good tempo, and the narrator gives the different characters subtle inflections that add color to the characters. There were good bits of info on the Pashtun culture that in reality all Americans should understand. I will shop for other Ignatius books for sure.

David Ignatius is one of the best thriller writers in America. Plots based in part on his even better reporting on Intelligence and foreign policy for The WashPost.

Worth the time it takes to get into the story

The intro/ first couple chapters are a bit fractured and hard to follow. But if you make it past that, it is a captivating story. That both entertains and makes you think about the current world events with a different perspective.
This was my first book by this author but won’t be my last.

Poor speaker ruins it all

I love the storytelling of David Ignatius and I was very much looking forward to hearing this book. Unfortunately it's a complete disappointment. The speaker is so bad and boring your pants off that it ruins the whole experience. How they could let this person narrate this book is beyond me. I'm not even halfway throughout the book and I called it quits. One should be able to block certain speakers when searching for new books.