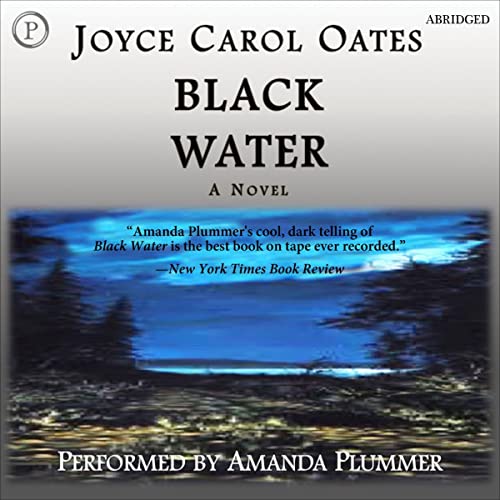 On Grayling Island, off the coast of Maine, Kelly Kelleher meets the Senator at a Fourth of July beach party. He is old enough to be her father; she is young enough to find his attention flattering. And with an optimism born of inexperience, she believes she can take care of herself. As evening approaches, the two move unaware toward a shattering appointment with destiny. When the Senator offers Kelly a ride to the ferry, it is not love but death that awaits her.

What's summer without a 4th of July party on a beach in Martha's Vineyard, a man-eating shark, or a plunge off a bridge into a murky tide-swept pond?

This novella was first published in 1992, 23 yrs. after Chappaquiddick. Oates began taking notes on the events at Chappaquiddick in 1969 out of what she called "a horrified fascination and sympathy" for the victim, adding that the story is not Chappaquiddick, but rather she wanted the story to be "somewhat mythical, the almost archetypal experience of a young woman who trusts an older man and whose trust is violated.'

Kelly Kelleher is 26, one of the young women decorating the Washington political scene, when she attends a 4th of July party at a celebrity couple's beachfront home. It's rumored *The Senator* will be attending; a powerful 50-something, Democratic Senator, separated from his wife, and the Democratic nominee for the Presidency, from which he withdrew. The man has a reputation. Sounding familiar?
Oates stays away from the facts and evidence of that event, keeping the reader with the victim in her parallel story. The car swerves onto a side road, bumps along, then smashes through the guardrail. The plunge is more sudden than she thought it would be...the water smells like sewage and is thick and black. As it disappears into the murky water she fights to free herself, she's stuck; she feels his foot push against her head as he propels himself away from her and the sinking vehicle. Struggling to keep the sludge out of her lungs, her mind begins to madly recount the events of the day, then reel through how she got to this place...and "I can't die here..."

The writing is what you'd expect from Oates, descriptive and intelligent, but the style she chooses for this story was not my preference. The narrative is a fast flow of words, almost frenetic, reflecting the panic of the situation through the victim's thoughts alone. But that didn't detract from what was a powerful experience. If you are considering this audiobook, I'll give you this from a more qualified listener: *In 2007, The New York Times Book Review editor Dwight Garner wrote that Amanda Plummer's "cool, dark telling" of Black Water was "the best book on tape ever recorded."

Where does Black Water rank among all the audiobooks you’ve listened to so far?

Would you be willing to try another book from Joyce Carol Oates? Why or why not?

All I have to say is the book was great

I couldn't stop listening to this powerfully written and powerfully read book by one of my favorite authors. I think it would appeal much more to women than men however.

What would have made Black Water better?

Only to cut it to 4 pages

What could Joyce Carol Oates have done to make this a more enjoyable book for you?

Would you be willing to try another one of Amanda Plummer’s performances?

Carol Oates writes so good, so why this abberation?

This book is hideous

This book is one of the worst books I have ever read. The story would have been interesting, but the author does nothing but rehash the story of a dying girl over and over again. The book goes on and on about trite minutia, repeating the same words and phrases again and again. I just wanted the girl to either live or die in the end, and towards the end, I didn't even care about that either. I did like the voice of the person that narrated the book, but after awhile, I just wanted to scream and make it end!

Disturbing well-written almost prose like fiction account of a horrifying true story. You can’t help absolutely loathe the person who caused the accident after listening/reading a 3.5 hour story about what took about an hour to happen. Really, horrifying. Joyce Carol Oates is a solid writer.

Would you listen to Black Water again? Why?

I would listen again as it is short but brutally observant, a kind of anti-thriller in which a foregone conclusion makes the character's thoughts of survival that much more tragic.

Somehow frantic and detached, Plummer captures the feeling of drowning as a whirlwind of desperation and acceptance, a feverish update of the tone of An Occurrence at Owl Bridge

Haunting and Beautifully performed by the narrator

Where does Black Water rank among all the audiobooks you’ve listened to so far?

Black Water is one of the best audiobooks I've ever listened to. I was captivated beginning with the first sentence. As the story began, I knew it was one that I'd listen to without interruption.

The story itself is creative and imaginative. It's a new twist on the Chappaquiddick events but is told from the young female passenger's point of view. It is an absolutely haunting novel. I'll never forget this book!

Kelly Kelleher because you can relate to what Mary Jo Kopechne went through as she drowned that night.

Amanda Plummer is far more talented than I ever knew!! Her narration was more than mere reading. It was a tour de force. I loved it.

Who was the most memorable character of Black Water and why?

Kelly Kelleher was my favorite character because through her eyes you feel every emotion that her brief life held.

I will recommend Black Water to everybody who loves a great book. But, wow, what a performance by Amanda Plummer. She made this audiobook a masterpiece!

Joyce Carol Oates is a master of fiction, and this novella is no exception. Story is dark, depressing, but beautifully done. Inspired by the Chappaquiddick incident

Very well acted, great performance, although the script did not match my hard copy. The book must have been revised at some point, some parts were missing some were added. I used a Plume/Penguin book from 1990.