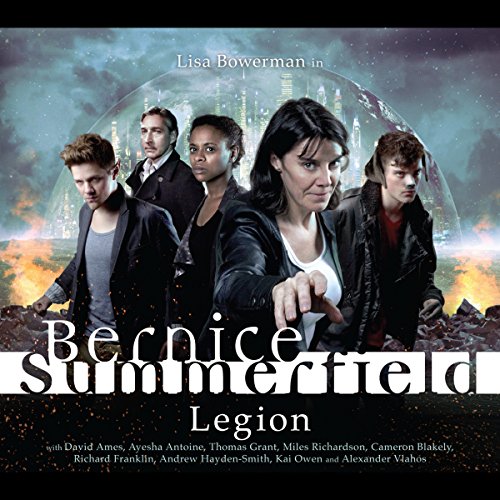 'Vesuvius Falling'. Written by Tony Lee. Things aren't going great for Bernice Summerfield. Her one time comrade-cum-adversary, Irving Braxiatel, isn't the man she knew; her long-lost teenage son, Peter, isn't exactly pleased to see her; and she's woken up with one hell of a hangover.... But when an ancient and dormant spacecraft threatens the safety of Legion City, Bernice and Peter have to put their differences aside in order to investigate an inexplicable mystery involving time-travelling scientists, corporate espionage and simple, cold-blooded murder.... Can Benny discover the true killer before a warp core breach destroys them all? Can a 5000-year-old body solve a murder yet to happen? And will the Vesuvius fall to the planet below...?

'Shades of Gray'. Written by Scott Handcock. 'They used to say this house attracts nothing but evil... What are we all doing here, I wonder?' Many years ago, in an old and dilapidated house, a priceless and powerful artefact was hidden: an item that has long since been forgotten...at least until Bernice, Ruth and Jack were sent to collect it. In the depths of Triptic House, Bernice and her friends find themselves at the mercy of an ancient and ruthless entity, one that has been yearning for escape, biding its time and going mad.... It has lived so very long now, with so many stories to share - tales of haunted mental institutions; tormented tapestries; living nightmares - and through each of them now, its stories shall be told. They shall be told, lived, suffered, shared...and ultimately, concluded.

'Everybody Loves Irving'. Written by Miles Richardson. Bernice and Braxiatel have never quite seen eye-to-eye...but now he wants to make amends. He's taking her on a leisure drive across Legion's deadly surface to an Ikerian settlement not far from Legion City. Their mission: shopping. The Ikerians are renowned traders, dealing in everything from the finest art to cut-price battlecruisers. They're willing to do a good deal too.

After all, they know Irving Braxiatel of old...and better than this Brax knows himself. Everywhere they go and everyone they deal with, Braxiatel's reputation precedes him. He has good friends and even better enemies...but one thing's for certain. Everybody loves Irving. Directed by: Gary Russell and Scott Handcock.