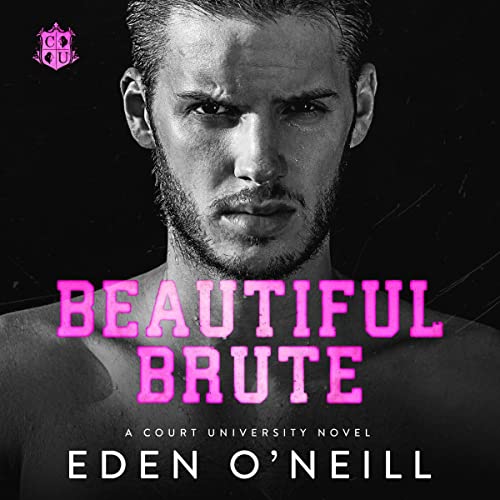 A night with a handsome stranger should have been the best one of my life.

But it turns out, he wanted so much more from me.

He’s beautifully vicious, lethal, the villain, and I’m nothing but the plaything that gives him his high.

He says I must pay for my sins. I do that or he’ll end me. He’s got it in his sick mind I’ve done something to him. That I’ve taken something from him, but I’m no thief.

The only thief is him. My enemy, my obsession. He involved me in his wicked game without me even knowing. Before he was cruel, he was kind, a stranger who’d been gentle and sweet. I even believed him capable of love.

Only that love turned out to be what I should fear most, his wickedest play of all. It’s true that his cruelty could break me.

But his love could destroy me.

Warning: Beautiful Brute is an NA stepbrother romance that contains graphic content and situations some may find triggering. It's recommended for listeners 17+ and is a stand-alone audiobook with no cliff-hanger. It's audiobook three in a series of stand-alones titled Court University, which is a spin-off series about characters featured in Eden O'Neill's Court High books. Listening to the Court High audiobooks first is not necessary for the enjoyment of Court University. The characters' origin stories merely begin in Court High and can be referred to at any time if the listener so chooses. Enjoy!

This audiobook is everything!!!

Beautiful Brute is book #3 in the Court University series. It's a stepbrother romance. It is narrated by Addison Barnes and Christian Leatherman.

You probably won't like Jax at first, but I promise he grows on you!!

Eden never disappoints!! I just wanted to reach thru my Kindle and hug Cleo. This girl has gone thru so much and she is still so strong. Jax, my boo Jax. He will have your emotions all over the place, and he will have you sweating, but you will fall in love with him!

And Addison and Christian, holy crap!!! They absolutely smashed this!!! They are PERFECT as Jax and Cleo!!!

I love this series so much and can't wait to listen to even more of Edens books!!!

I absolutely love this series and really enjoyed listening to Addison Barnes and Christian Leatherman bring Chloe and Jax to life.
This is one of my favorite tropes to read. This book had me captivated and I couldn't put it down until I finished it. Listening to it brought it to a whole nother level!!! I couldn't stop listening and had my audible app of this book going while I was shopping, playing it in my car, and even while I cleaned and cooked. This is a bully romance and should be read with caution.

Chloe is the girl next door. She is a free spirit and loves life as much as she can. I really enjoyed her tenacity and ability to adapt and put everyone before herself. Jax is tall, dark, and hot!!! He has a chip on his shoulder and is out to fix that. I loved his growth throughout the book. Addison and Christian were amazing with each character that they voiced. They made the characters their own and I could feel it to my bones. Loved, loved this book and the audible version.

Love this story and have spent all my time and money on it; happily.

This is Cleo and Jax the start of their relationship was awkward. He knew who she was but she had no idea who he was. These stepsiblings have an intense beginning. His actions were calculating and Cleo was blameless.

Beautiful Brute is the 3rd book in the Court University series. This book is told from dual points of view by Cleo and Jax.

Cleo and Jax meet when she's out one night and he ends up on her bed. He lies to her about his name and when her parents come home she tries to hide him, Only to find out he knew who she was and is her stepbrother she has never met.

Jax wants revenge for his father cheating on his mother and leaving them when they were younger and what better way to take it out on his father's new family? He’s pretty mean to Cleo even though she tries to stay positive he will do whatever he can to break her down.

As they are together Jax realizes there is more going on in the past than what he knew. When he finds this out will it be too late to get his happy ending with his dad? How will it affect his relationship with Cleo? Can Cleo forgive Jax for all he puts her through?

I really liked this book and am glad I didn’t read reviews before I listened to it. I also really enjoyed the narrators and they really brought the book to life.

The beauty and the beast

I’ve always had a thing for long lost stepbrother romances. Something so forbidden and appealing about it. Sneaking in the house after hours, secrets between you both, it kind of tickles my fancy.

Jax can be seen as a demon in the sheets, and out of jt, a hard and dominant man yet someone with a heart as soft as cotton.
Cleo, the first time I listened to her made me think of a sprite, good and just the perfect definition of cute.
Together, they don’t seem to be a match. And yet, as the story progresses, they are inexplicably perfect for each other.

The book started wth such heat and want I immediately fell for Jax. Too bad he kind of did everything in his power to be an ass. Truth be told, if I were in their situation, I would have probably hit Jax upside the head multiple times. He’s so incredibly infuriating. A lot of misconceptions and miscommunication. And yet, he’s so enigmatic, he completely draws me in.

The moment things turned around for them, it was just so much love in my heart. I absolutely loved getting into their heads and feeling what they’re feeling! I love these two characters so much!

Well done!! To both Eden and the narrators! Great listen!

Eden, you're killing me! This book was so good. I have to day Jax is my favorite of all. This is Jax and Cleo's story and what a story it is. This book grabbed me from the beginning and held on tight for the entire ride.

Beautiful Brute by Eden O’Neill
I loved every bite of this story telling. It had the right bits of happiness and sad emotional area when needed. The story was gripping and at times I wanted to punch Jax! Let’s not forget the chemistry these two had!

I absolutely loved listening to Beautiful Brute! Addison and Christian did a fantastic job bringing Cleo and Jax to life!

Read the book first then listened always love hearing it too. I like seeing this series since I read the kids first