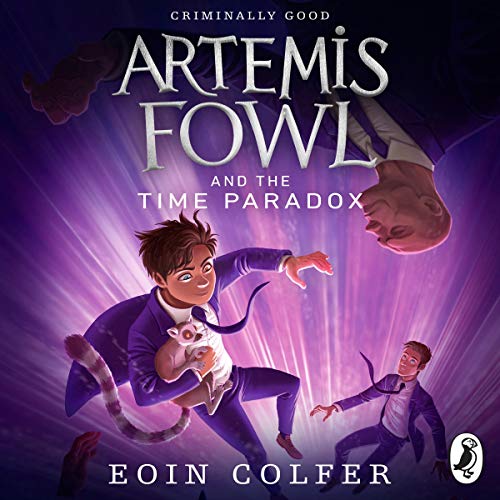 Artemis Fowl and the Time Paradox

The unabridged, downloadable audiobook edition of Artemis Fowl and the Time Paradox, the sixth book in the criminally good Artemis Fowl series by Eoin Colfer. Read by the actor Gerry O'Brien.

Artemis Fowl is no stranger to trouble. In fact he's a magnet for it. Man-eating trolls, armed and dangerous (not to mention high-tech) fairies, flame-throwing goblins - he's seen the lot. He had decided to forego criminal activity of the more magical kind. However...now his mother is gravely ill. He must travel back through time to steal the cure from the clutches of the devious mastermind.... Artemis Fowl.

That's right. With fairy ally Captain Holly Short by his side, Artemis is going back in time to do battle with his deadliest enemy yet. Himself.

Eoin Colfer was born and raised in Wexford in the southeast of Ireland. He began writing plays at an early age and, as an adult, continued to write. Artemis Fowl, his first book featuring the brilliant young anti-hero, was an immediate international best seller and won several prestigious awards.

Shortlisted for the Whitbread Children's Book of the Year Award.

"Grips like an electromagnet until the last word" ( Independent)
"Engagingly vivid, exciting and witty" ( The Telegraph)
"Fast, funny and very exciting" ( Daily Mail)

I've been reading this series of books on and off since I was 10 years old, and I still enjoy them wholeheartidly in my mid-20s. I keep coming back to the characters, the adventure and the quick wit of these wonderful books. An easy read and easily followed, but beyond exciting, listening to it is like watching a great action/comedy in your head. How Colfer deals with the back and forths of time continuum theory is admirable, and nothing but fun. A huge plus is the short story at the end where we get to hear about Holly's initiation in to L.E.P and it is nothing but the juiciest cherry on top of an already exciting book.