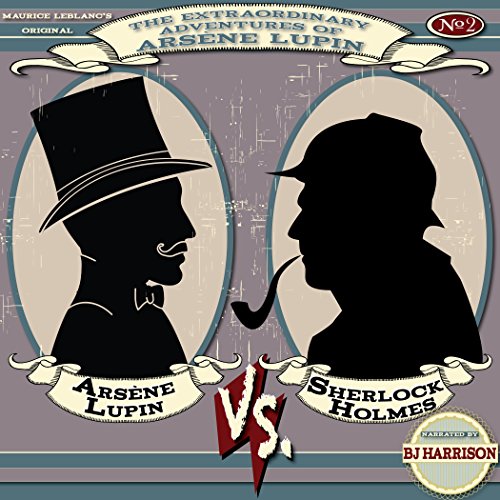 The national burglar of France faces off against the national detective of England in two unforgettable stories. Originally released as Arsene Lupin vs. Herlock Sholmes because of copyright issues, we have taken the liberty of replacing the counterfeit names originally published with those of the original sleuth himself, Sherlock Holmes (in the place of Herlock Sholmes) and his faithful Dr. Watson (in the place of Wilson). The result is an experience for the ages that you won't want to miss.

Three desperate crimes each proclaim the orchestration of Arsene Lupin (master of disguise, historian, fine-art expert, and gentleman thief). How did he do this, given their sheer impossibility and absolute lack of clues? All three of these burglaries couldn't have logically happened, and the valuable pieces are, indeed, missing. Though Inspector Ganimard, who has already arrested Lupin once, does his very best, he is at a complete loss. Finally, the great Sherlock Holmes himself is brought in to bring the elusive Lupin to justice.

Both are at the very pinnacles of their respective professions, and each gives as well as he gets in this royal battle of wits. Don't miss this extravagant game of plot and counterplot with two of the greatest characters in the mystery genre: Sherlock Holmes and Arsene Lupin.

May the Best Mind Win

I absolutely loved Maurice LeBlanc’s first Arsene Lupin Book, “The Extraordinary Adventures of Arsene Lupin,” so naturally I had to pick up the sequel! Plus, B. J. Harrison returns to continue his outstanding narration from the previous book!

Sir Arthur Conan Doyle actually sued LeBlanc for putting Sherlock Holmes into this novel without his permission, but I’d forgive LeBlanc’s intellectual property theft since he is clearly a huge fan of the detective. Plus, Holmes scholars will recall that several stories make references to Holmes visiting France, so in my opinion this book should be considered canonical.

I’m not sure LeBlanc gets Holmes’ personally down perfectly, he certainly messes up Watson’s doting characterization, but it’s absolutely spectacular to watch the world’s greatest detective go up against the world’s greatest thief. This book feels like watching two Chess masters doing battle across an entire country. If that sounds interesting to you, you must check this one out. What more are you waiting for? Beyond highly recommended!

Great Performance of a Mediocre Story

B.J. Harrison did a fantastic job, but the story feels like a fanfiction written after someone read one of those crappy "versus" posts on forums. Holmes is portrayed as quick to violence and for the most part feels somewhat incompetent compared to the canonical version. However, it was still good to see a crossover, I just wish it didn't feel so Lupin-weighted.

Lupin vs (A bellow average adaptation of) Holmes

In terms of the performance it was great. But the Sherlock Holmes... it pains me to listen somtimes. Holmes in this is a jerk. He aragonat, shallow, and a bully. Just not what I hoped from a writer who was a close contemporary of the original writing of Sherlock Holmes. Lupin barley shows up in this and is always very anoying except for the end of the blue diamond. The story also takes place in first person of Holmes. That ruins a lot of the observation and deduction aspects of Holmes which he is known for. If your a die hard fan of The True Sherlock Holmes (Not BBC crap or CBS's elementary or Robert Downey Jr) you probably won't like this for the Holmes aspect. Lupin himself is an awsome charecter and doesn't get the stage time like he should. Read the first one it's sooo much better.

If you’ve listened to books by Maurice Leblanc before, how does this one compare?

The first one read by B.J Harrison is awsome. This one not so much...

The end of the blue diamond

First I'd love to give praise to the narrator B.J. Harrison. His voices, his accents, his voice smooth and clear, it was perfect.

I'm a huge fan of the lupin series and Leblanc's writing style is so natural and smooth; however I had a hard time understanding this book. It would probably be better if I read the book along with listen to the audio, but it just wasn't what I was expecting of the gentleman theif (or burglar) series.