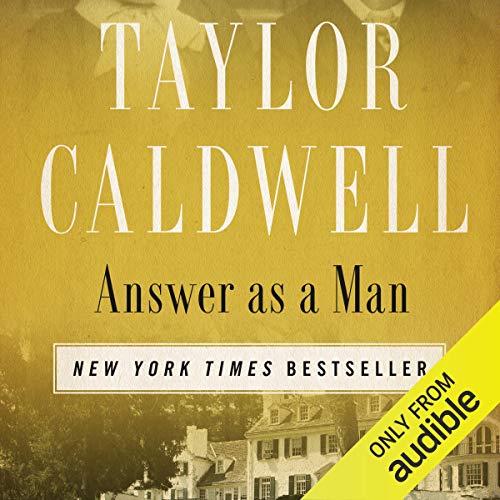 Answer as a Man

New York Times best seller: In early 1900s Pennsylvania, the ambitious son of Irish immigrants pursues the American Dream in the face of injustice and intolerance.

Fourteen-year-old Jason Aloysius Garrity is now of age to work full-time in a Pennsylvania coal factory, earning four dollars a week. His family left their hardscrabble life in Ireland to create a better one in America. But their shanty-like home on a street filled with outhouses, horse manure, and the ever-present odor of noxious gas is a hell all its own. Yet Jason possesses the passion and principles that will lift him out of the abject poverty surrounding his widowed mother, fanatically religious younger brother, and manipulative crippled sister.

With World War I looming on the horizon, Jason begins to make his way in Belleville’s burgeoning business world. He marries beautiful, wealthy Patricia Mulligan, unaware that their union is built on a deception that will have far-reaching consequences not only in his life, but in the lives of his three children.

Filled with unforgettable characters, this masterful retelling of the Book of Job depicts one man’s will to succeed amidst the slings and arrows of fortune.

I’m biased because I’m a huge fan of Taylor Caldwell, however, let me say as a reader in general that this book kept me returning to it constantly to find out what was next to occur in the lives of the well fleshed out characters. Like most of Taylor’s books, she set this during an important transitional period in the history of the world and always was sure to weave a believable tale that captured the characters in the historical vortex and in turn captures the reader and takes him or her along for a storytelling journey and a solid history lesson. Any reader of historical fiction is advised to soak up the author’s love for writing. The narrator was excellent in his ability to portray different accents and personalities as the characters and also tell the story. Bravo.

Answer as a Man

I listened to the Audible of this book and became so interested and involved that I could clean house all day when it was on!!