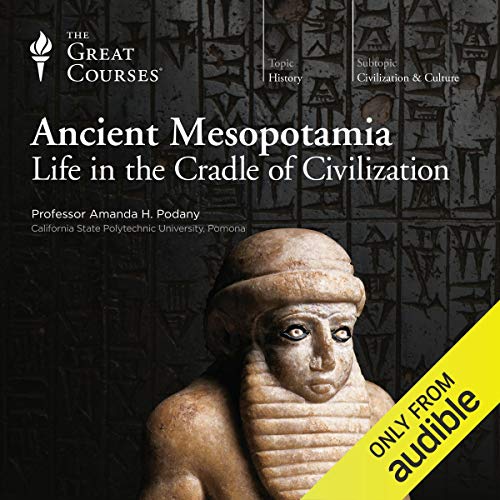 When we imagine what life might have been like thousands of years in the past, the images we often conjure are primitive ones: reed and mud huts or plain brick dwellings, cooking pits, villagers, and simple farms. That was indeed what life was like in the earliest settlements, but by 5,000 years ago, life in some places had become much more sophisticated than we might think. Impressive achievements - like stepped temples that towered like mountains, elaborate palaces (some with bathrooms and plumbing), and complex houses - were also a part of life for people who lived in cities that arose thousands of years ago, particularly in the fertile region that emerged along the Tigris and Euphrates Rivers.

Welcome to Mesopotamia, the ancient name for the region that is now Iraq, a remarkably advanced civilization that flourished for two-thirds of the time that civilization has existed on Earth. Mesopotamians mastered irrigation agriculture; built the first complex urban societies; developed writing, literature, and law; and united vast regions through warfare and diplomacy. While civilizations like Greece and Rome have an unbroken tradition of written histories, the rich history of Mesopotamia has only been recently rediscovered, thanks to the decipherment of Mesopotamia's cuneiform writing less than 200 years ago. In this 24-lecture course taught by Professor Podany, you'll fill in the blanks of your historical understanding as you witness a whole new world opening before your eyes.

Riveting stories about kings and priestesses as well as ordinary people from all walks of life transport you back in time, giving you invaluable insights into the history of a landmark region that has long been known as the cradle of civilization.

Best course this year! Sometime ago I read Amanda Podany's "Brotherhood of Kings How International Relations Shaped the Ancient Near East" and enjoyed the lively vigorous and compelling narrative regarding the birth of diplomacy I found her lectures for Ancient Mesopotamia were likewise, and some of the very best I have ever listened to. Professor Podany has a great speaking voice, a fine sense of humor and has the unique ability in a series of well-organized lectures to bring the world of Sumer and Akad to life. As a scholar Podany is able to both translate the four thousand year old cuneiform tablets and reveal the world's first literature, legal systems and civic governments. Her lectures are lively, well paced and display a wide knowledge of the ancient world.

Prof. Podnay is interesting and engaging, but the series is not as good as it might have been. Here's why: (1) Despite the chapter titles, the organization is not always temporal. (2) The version of Gilgamesh she's reading from seems very sanitized to me, which is ahistorical. (3) She is reluctant to criticize, even where criticism is pretty obviously warranted. (4) There are some pet topics that could have been omitted, like the whole lecture on Hana.

Awesome listen but is not standalone. Other sources (especially maps) are required to understand what is happening and where.

Unlike some of the Great Courses, which tend to be conveyed in the usual fact-listing monotone with little or no background story, these lectures captivate you from the start. The way Dr. Podany describes everyday life in the context of Mesopotamian history brings the entire period to life and holds your attention from beginning to end. She truly loves her work and you can hear this in her voice. She uses what we know to understand the people. Suddenly, you feel as if you were there, sharing their lives, understanding their thinking and how they saw their own world. This is the best course in the Great Courses series that I listened to so far.

This audiobook could be the best I have ever owned....Professor Podany's enthusiasm and knowledge lift this audiobook to wonderful heights, and makes most other audiobooks sound dreary. I had cycled through other histories of the time/place and was despairing - why couldn't someone write a book that was well-written AND interesting about an inherently interesting time? Well this is it! I listened to it twice, and I couldn't have had better company on my daily dog walks. THIS IS EXCELLENT!

Hard-evidence-based research and understanding complemented by an artful, conversational deilvery made this an entertaining as well as educational escape to the very-relevant past. Brava, Professor!

No cell phones in ancient Mesopotamia

The valuable information in this course focuses on daily life in Mesopotamia and Mesopotamian society and government. There is also an unusual amount of “storytelling” in this course which I found annoying and at times obnoxious.

There are moments of interesting interpretation and new and updated information in this course. I found those moments too few and too far in between.

Almost quit on it. Glad I didn't.

The first lectures are basic. They're more introductory than can be described. I was convinced I was not the target audience and that this must be something assigned to middle schoolers.

Then Prof. Podany started bringing it all together. Names, dates, accounts and compelling stories. Things I hadn't gotten from 1177 or other audiobooks on the topic. Details that drew me in.

So glad I stuck around.

The Western world traces its religious and ethical outlook to Ancient Mesopotamia and would do well to better understand this period of history. Dr. Podany has done an excellent job of opening up the Mesopotamians to a modern audience. As she presents them, you are unaware of how long ago they lived, worked, prayed, and died. They are almost contemporaries.

Thank you Great Courses and thank you Professor!

Really one of the best Great Courses

This has been such a delight to listen to. Empathetic, interesting, and totally brought Ancient Mesopotamia to life. I didn’t think I would be interested in early civilization previous to the Greek and Roman age, but this was fascinating and the lecturer’s sincere love of her subject made me feel connected to the people of that age.