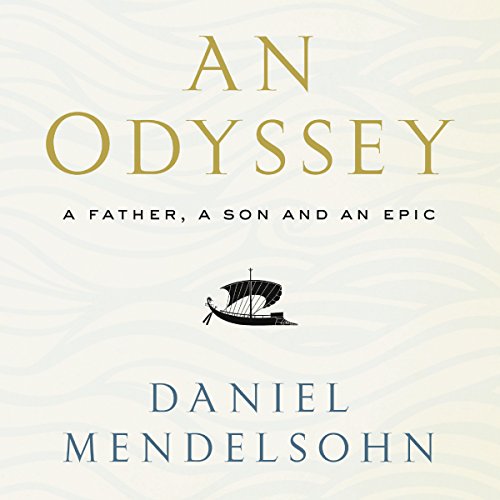 An Odyssey: A Father, A Son and an Epic

From the award-winning, best-selling writer: a deeply moving tale of a father and son's transformative journey in reading - and reliving - Homer's epic masterpiece.

When 81-year-old Jay Mendelsohn decides to enrol in the undergraduate seminar on The Odyssey that his son Daniel teaches at Bard College, the two find themselves on an adventure as profoundly emotional as it is intellectual. For Jay, a retired research scientist who sees the world through a mathematician's unforgiving eyes, this return to the classroom is his 'one last chance' to learn about the great literature he'd neglected in his youth - and, even more, a final opportunity to understand his son.

But through the sometimes uncomfortable months that follow, as the two men explore Homer's great work together - first in the classroom, where Jay persistently challenges his son's interpretations, and then during a surprise-filled Mediterranean journey retracing Odysseus' legendary voyages - it becomes clear that Daniel has much to learn, too, for Jay's responses to both the text and the travels gradually uncover long-buried secrets that allow the son to understand his difficult father at last. As this intricately woven memoir builds to its wrenching climax, Mendelsohn's narrative comes to echo The Odyssey itself, with its timeless themes of deception and recognition, marriage and children, the pleasures of travel and the meaning of home.

Rich with literary and emotional insight, An Odyssey is a renowned author-scholar's most revelatory entwining yet of personal narrative and literary exploration.

"My favourite classicist once again combines meticulous literary investigation with warm and wrenching human emotion - books like these are why I love reading." (Lee Child)
"There are a handful of books that have captured the pleasure and romance of this subject. Donna Tartt's was one...this is another. Homer has a phrase for those who can speak bewitchingly: they have 'winged words'. Mendelsohn has winged words." (The Times)
"Sharply intelligent.... A frequent contributor to the New Yorker and the New York Times Book Review, Mendelsohn is also a classics scholar. His father, a retired mathematician, had been interested in the classics during his school days and decided to continue his education by studying with his son.... Ultimately, this book [is] about what they learn about each other - and what they can never know about each other. The author uses a close reading of the epic to illuminate the mysteries of the human condition; he skillfully, subtly interweaves textual analysis [with] the lessons of life outside it.... A well-told story that underscores the power of storytelling." (Kirkus)

Ce que les auditeurs disent de An Odyssey: A Father, A Son and an Epic

A father and a son

A beautifully realised unfolding of the story of a father and a son based around the experience of studying Homer's Odyssey together.