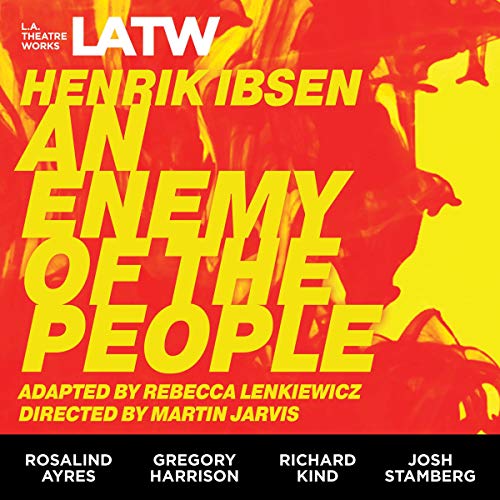 An Enemy of the People

When a small town relies on tourists flocking to its baths, will a report of dangerously polluted waters be enough to shut them down? Henrik Ibsen weighs the cost of public health versus a town's livelihood and skewers the complicity of the masses in his classic and still timely play.

Recorded before a live audience at the UCLA James Bridges Theater in April 2014.

"L.A. Theatre Works' 'radio theater' production of Ibsen's classic play about environmental contamination, science, dissent, and hypocrisy offers a well-rounded audio theater experience. Very little in Ibsen's original work requires theatrical action, and, when it does, the LATW cast - including Richard Kind, Rosalind Ayres, Gregory Harrison, and Josh Stamberg - and the production team do an excellent job of conveying it through sound. Like most dramatic works, the two-hour play is best enjoyed in one or two sittings. Ibsen's themes remain relevant, almost prescient, nearly a century and a half after he wrote this play." (AudioFile magazine)

Addresses the dilemma of public health versus public wealth

The story of a town that faces a public health issue that threatens their economy dives right in. What saves the town? Nepotism or idealism? Ibsen raises so many questions that a society faces. The characters are easy to tell apart. Their conversations sound natural. The story builds, there is so much wisdom in this play!

Loved Richard Kind's acting in this! I will look for other audible books he's featured in!