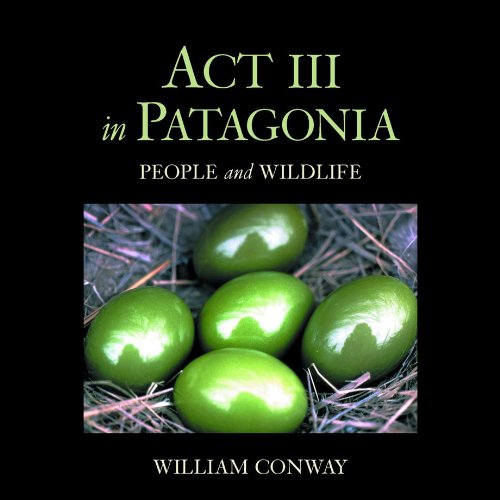 Performed with aplomb by Fajer Al-Kaisi, Act III in Patagonia: People and Wildlife is the result of years of research and firsthand experience by South America expert William Conway. A dedicated conservationist, William Conway has travelled the mountainous paths of Patagonia for years. Fajer Al-Kaisi truly succeeds in vividly portraying the diverse culture and scenery of one of the world's most magnificent and unique ecosystems. Al-Kaisi has a talent for giving Conway's informative text the enthralling treatment it deserves.

Patagonia. The name connotes the exotic and a distance that seems nearly mythical. Tucked toward the toe of South America, this largely unsettled landscape is among the most varied and breathtaking in the world - aching in its beauty as it sweeps from the Andes through broad, arid steppes to pristine beaches and down to a famously violent sea. It is also home to a vast array of rare wildlife as diverse and fascinating as the region itself.

Act III in Patagonia is the first book to take an in-depth look at wildlife and human interaction in this spectacular area of the world. Written by William Conway, former president of the Wildlife Conservation Society, the book is unique in its concentration on the long Patagonian shoreline - populated by colorful cormorants, penguins, elephant seals, dolphins, sea lions, and numerous species of whale - and an increasing number of human beings.

Threatened by overfishing, invasive species, artificially abundant predators, and overgrazing, the Southern Cone of Patagonia is now the scene of a little-known conservation drama distinguished by the efforts of a dedicated group of local and foreign scientists determined to save one of the Earth's least-inhabited places. From tracking elephant seals in the Atlantic to following flamingos in the Andes, Act III in Patagonia takes readers to the sites where real-life field science is taking place. It further illuminates the ecology of the region through a history that reaches from the time of the Tehuelche Indians known by Magellan, Drake, and Darwin to the present.

Conway has helped to establish more than a dozen wildlife reserves in South America and is thus able not only to tell Patagonia's history, but to address its future. He brings a wealth of knowledge about Patagonia and its wildlife and responds to the difficult questions of how the interests of humans and wildlife are best balanced.