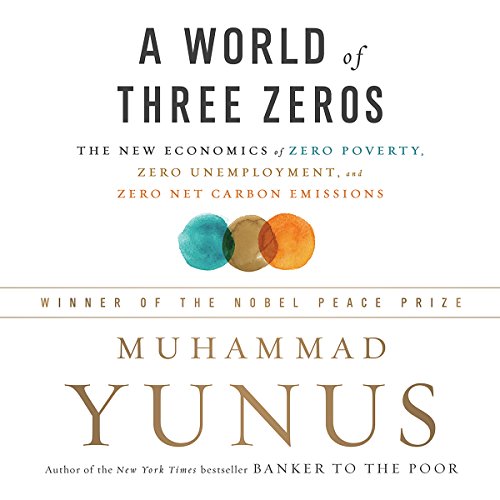 A World of Three Zeros

Muhammad Yunus, who created microcredit, invented social business, and earned a Nobel Peace Prize for his work in alleviating poverty, is one of today's most trenchant social critics. Now he declares it's time to admit that the capitalist engine is broken - that in its current form it inevitably leads to rampant inequality, massive unemployment, and environmental destruction. We need a new economic system that unleashes altruism as a creative force just as powerful as self-interest.

Is this a pipe dream? Not at all. In the last decade, thousands of people and organizations have already embraced Yunus's vision of a new form of capitalism, launching innovative social businesses designed to serve human needs rather than accumulate wealth. They are bringing solar energy to millions of homes in Bangladesh; turning thousands of unemployed young people into entrepreneurs through equity investments; financing female-owned businesses in cities across the United States; bringing mobility, shelter, and other services to the rural poor in France; and creating a global support network to help young entrepreneurs launch their start-ups.

In A World of Three Zeros, Yunus describes the new civilization emerging from the economic experiments his work has helped to inspire. He explains how global companies like McCain, Renault, Essilor, and Danone got involved with this new economic model through their own social action groups, describes the ingenious new financial tools now funding social businesses, and sketches the legal and regulatory changes needed to jumpstart the next wave of socially driven innovations. And he invites young people, business and political leaders, and ordinary citizens to join the movement and help create the better world we all dream of.

"With wealth disparity an ongoing global concern, Yunus's inspiring and hopeful message is a must-read for all readers with even a semblance of economic literacy." (Library Journal, starred)

Wow. This man is doing god’s work. Our society should be exalting real heroes like this rather than actors and athletes. The book itself is a little repetitive and not necessarily all that well written, but that’s a minor nit for a book that’s conveying such an important and innovative concept. I hope it catches on. I’ll certainly be spreading the word.

Chapters are different in content and cases used as examples that's really interesting, nevertheless are a bit repetitive in the arguments...

Read with Humanizing the Economy

The book presents a great intermediary idea between our existing unsustainable way of operating economically and a richer more vibrant future socioeconomic theory. Three Zeros left me optimistic that we can bridge our current cycles of inequality effectively enough to buy time to discover new ideas.

This book brings hope to billions of impoverished people around the world. It is a beacon calling out to the future of a world to come.

It did bug me that Yunus presented his solutions as cure-alls. However, he convinced me that his ideas could make a big difference in the world once he got to social business funds.

Wonderful ideas though expressed on a very lengthy manner for my taste.
What Yunus proposes could have a tremendous impact in solving many of the world's most complex problems.

great for young entrepreneurs and a mindshifting book for all of us in order to help not by giving for free but to invest and trust in others to make this world a better place.

The examples given in the book are fantastic and make this a great book. Informative & inspiring.

An intriguing vision of the future

This book has opened up a realm of possibility for me as a student of progressive change. It not only introduced the concept of the social business, a self-sustaining not for profit entity devoted to promoting the common good in some capacity, but also to the efforts which the United Nations has made so far in defining and solving the world's most pressing problems.