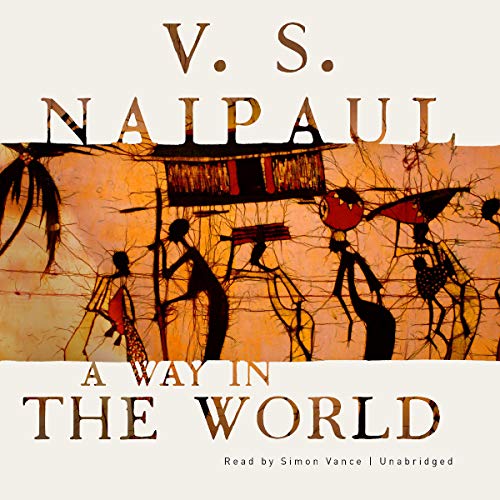 A Way in the World

In a vastly innovative novel, Nobel Prize-winner V. S. Naipaul intertwines memory and history to create what is at once an autobiography and an ambitious fictional archaeology of colonialism.

Spanning continents and centuries and defying literary categories, A Way in the World tells intersecting stories whose protagonists include the disgraced and half-demented Sir Walter Raleigh, who seeks El Dorado in the New World; the 19th-century insurgent Francisco Miranda, who becomes entangled in his own fantasies and borrowed ideas; and the doomed Blair, a present-day Caribbean revolutionary stranded in East Africa.

Among these presences is a narrator who bears a telling resemblance to Naipaul himself: a Trinidadian writer of Indian ancestry and English residence boldly trying to come to terms with the mystery and transience that is his inheritance.

This a Biographical pathway through the life of a wonderful writer. Not since reading the biographies of Gandhi & Churchill have I come across a more remarkable personality of their likeness.

An inspired and brilliant voice for our times

Naipaul’s extraordinary writing talent combined with his unique experience of the preserved traditions of India transposed to the Colonial Backwaters of the new world give him special insights and expression of the complexity of history that only the novel can provide. A Way in the World is an excellent example.

struggled to get through it. Not a good choice for such a good narrator like Vance

Although described as a novel, this book reads like a history lesson with multiple historical facts, descriptions, and citations frequently repeated. Despite such repetitions, the speakers in the history selections are hard to separate and then you find that confusion doesn’t matter so much because these imagined conversations are not especially interesting or entertaining. If Naipaul includes the backstory of colonized Trinidad as a way to understand the island of his upbringing, it’s odd that he only focuses his history on the 17 & 18th C Spanish and British invasions with little to no focus on the Indian diaspora to which he belongs.

Also, as great a reader Simon Vance is, he’s a peculiar choice for this book. Did Naipaul develop a posh upper class Brit accent, abandoning his Trinidadian accent when going to Oxford University? The book is told from three different first person narratives, with only one (Sir Walter Raleigh) being an educated Englishman. Therefore, Vance’s accent and manner of speaking seem to belong to someone other than a Trinidad or a Venezuelan general.