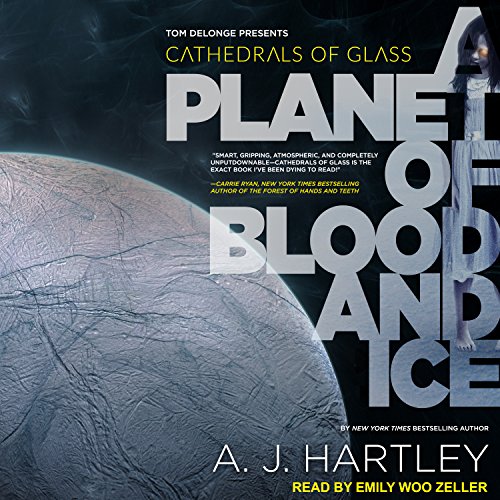 A Planet of Blood and Ice

Ten teenagers broke behavioral law. Sentenced to be reeducated on the moon of Jerem, they were placed in stasis on the automated ship Phetteron for their six day journey. They never reached their destination.

Thrown off course by a computer malfunction, the Phetteron is damaged in an asteroid belt and crash lands on the uninhabited ice planet of Valkrys. Having spent their lives in temperature controlled environments, consuming nutrient supplements, and interacting with people mostly through the infonet, the teens are unprepared to depend on each other to face the harsh, hostile, and hellish landscape. Home will send a rescue party long before their meager supplies run out.

Sola was a roamer. She wandered the city after curfew, reveling in the freedom of being disconnected from the techgrid and embracing the joy of physical activity. For those actions, Home declared her deviant. But on Valkrys, her deviance is an asset that may be the teens' only hope for survival.

As Sola explores their strange new world, she discovers that she and her shipmates are linked by something more frightening than their subversive behaviors - and uncovers a truth about the planet the authorities at home wanted buried.

I enjoyed the book. Explores the spiritual and "space-y" subjects. While listening to the book i felt like i was actually there on a frozen planet. It has some lord of the flies vibes. Recommend if youre into that space type of shtuff.

fast paced, great setup for series. can't wait to hear the next one for sure

From reading the description I wasn’t sure if I was gonna like it, but AJ is a great author so I tried it and wow am I glad I did. What an exciting book. Was on the edge of my seat for most of it and couldn’t recommend it more! Thrilling, exciting, makes you think a lot. Relates very well to the world in which we find our selves technology depended. I hope there may be a day we were get to found out more! A sequel perhaps!

Liked it! Hope they get better though.

The ideas in this book are great and I really only picked it up because of To the Stars and what Tom Delonge is doing with that project. The performance of the reader was slow going, but it kept the tension at times. I was hoping this book would be a little more involved like Sekret Machines, although I realize this is a young adult selection. I'm hoping that as these continue they get more involved and more intense. Still a great job and I think considering the intro by Delonge, this book is worth considering on the ideas alone. I look forward to the next one to see how this continues. Now on to Sekret Machines: Gods, Man and War.