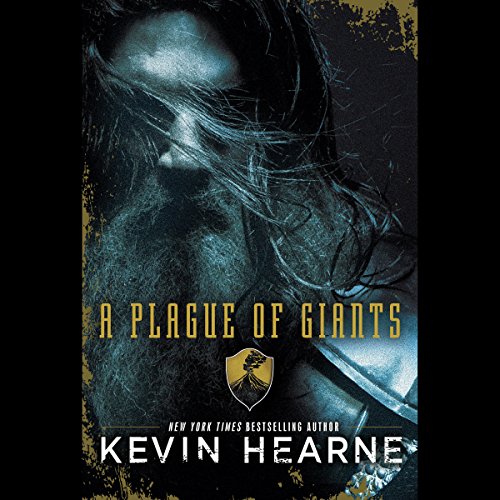 A Plague of Giants

A Plague of Giants

From the author of The Iron Druid Chronicles, a thrilling novel that kicks off a fantasy series with an entirely new mythology - complete with shape-shifting bards, fire-wielding giants, and children who can speak to astonishing beasts

Tallynd is a soldier who has already survived her toughest battle: losing her husband. But now she finds herself on the front lines of an invasion of giants intent on wiping out the entire kingdom, including Tallynd's two sons - all that she has left. The stakes have never been higher. If Tallynd fails, her boys may never become men.

Dervan is a historian who longs for a simple, quiet life. But he's drawn into intrigue when he's hired to record the tales of a mysterious bard who may be a spy or even an assassin for a rival kingdom. As the bard shares his fantastical stories, Dervan makes a shocking discovery: He may have a connection to the tales, one that will bring his own secrets to light.

Abhi's family has always been hunters, but Abhi wants to choose a different life for himself. Embarking on a journey of self-discovery, Abhi soon learns that his destiny is far greater than he imagined: a powerful new magic thrust upon him may hold the key to defeating the giants once and for all - if it doesn't destroy him first.

Set in a magical world of terror and wonder, this audiobook is a deeply felt epic of courage and war, in which the fates of these characters intertwine - and where ordinary people become heroes, and their lives become legend.

"You'll laugh and cry and crave mustard as you're immersed in the literal magic of storytelling in Kevin Hearne's vivid new epic fantasy. I have experienced acute withdrawal symptoms since the book ended. I don't want to leave this world." (Beth Cato, author of Breath of Earth and The Clockwork Dagger)

"A Plague of Giants is an absorbing epic fantasy, with clever storytelling that allows its many threads to each feel important, personal, and memorable. I'm very much looking forward to the sequel!" (James Islington, author of The Shadow of What Was Lost)

I pre-ordered this first installment of the new series by Kevin Hearne based on my total enjoyment of his Iron Druid series. I know that it is a completely new book set in a world of its own, but I must admit that I was kind of dissatisfied with this book.

I blame Iron Druid for this - I half way expected this book to have the same light hearted, fast paced execution with similar humorous undertone as the previous series, but this series is much darker and somber and slower than predecessor. Hence the disappointment.

All that said, the world building and characters are interesting and after a while the pace picks up as all the main actors are introduced.

Overall it was a good and entertaining read/listen and I guess if the second part is released, I will check it out as well to see what happened to everyone introduced in the first book.

Just a note of warning to all Iron Druid fans - this is definitely NOT an Iron Druid book. Adjust your expectations accordingly.

After 4 hours, of book time, and about 6 hours of actual listening time I almost gave up because I had to keep going back and re-listening to parts. I can not for the life of me understand what Xe Sands is saying - She seems to be constantly mumbling. As usual, Luke Daniels puts on a great performance. Perhaps it is the disparity between the two actors, but I'd suggest listening to the sample before committing a credit. This needs to be re-recorded, or buy the physical book.

I Want to like this book. The parts of the book I can understand, read by the always awesome Luke Daniels are a new and different flavor from Kevin Hearne, and I have enjoyed those parts of the book. However, Xe Sands is hard to understand at speaking volume. I also could not differentiate between the first two character voices. I had to turn my car stereo up loud enough that it was uncomfortable to listen, just to understand what Sands was reading. This Audio book needs to be re-read by someone who can enunciate, or remastered to clarify Sands voice. either way I am disappointed by Xe Sands performance in this audio book.

I adore The Iron Druid Chronicles and fell more in love with the world when I got the audio books. Luke Daniels is my favorite narrator. He makes the story and characters come to life. Each voice is unique, spot on and feels real. So the magic is part the writing and part the reading.

This had to be mentioned because I'm not sure how to proceed with this novel. I've listened to it for a few hours - several hours of commute time - but I'm so disappointed with the female narrator and the brunt of the novel thus far has been in her voice.

Her tone is mostly flat. I could live with this but she also doesn always enunciate chunks of dialogue or narrative well and there are many parts I'm missing because I can't rewind while driving. To top it off, she has very little range in terms of creating different characters. Combine these three flaws and the book has so far been a bit boring, drawn out by the monotone voice and hard to understand on many levels with some of the story being lost to slurring of words and other parts to not knowing who is talking because we have basically two characters - 1. Female voice and 2. Gruff old maybe male or maybe female voice.

Since I am about 15% of the way in and I'm this unenthusiastic with what I feel are legitimate concerns I have put this no episode on pause. I'm not sure how to proceed and I'm deeply disappointed.

Sorry for the negative review and I hope to only help those who are looking for an experience on par with the other works by Kevin Hearne and Luke Daniels. Also beware of you are hard of hearing, will have ambient noises while listening or get confused when character voices are all the same.

If and when I come back to this novel I will update further but the experience so far was so poor that I felt compelled to share it.

I'm a fan of Hearn's Iron Druid series and was excited to see that he'd started a new one. Unlike the urban fantasy, this one reaches for a more traditional epic fantasy feel. And fails. The device of a bard relaying the story removes the reader/listener from the emotional impact of the tale. After a while, some of the characters are difficult to tell apart. Then Hearne has to finish some of the characters' deaths in first person as if they'd written the story of their death in their diaries before dying.
The audio version switches between a male and female voice. Which sometimes makes the character switches even more confusing. Also, they end up having to sing parts.... Which I'm sure is difficult without the tune being set down for them....but it's not great.

I'm a huge fan of Kevin Hearne and I tried and tried to get into this book but I could not get past the female narrator's voice or cadence. I gave it five painful hours, could not take it anymore.

I just can't get past the contrived accents and mumbling of the voice actors. It was hugely distracting to the story, which I'm sure is good. Tip to potential buyers: Listen to the audio sample before you buy, since the voice acting can be a matter of personal choice. I personally found it unlistenable and will be buying the paper version of this title.

Could have been Great, but...

OK, there are two major issues wrong with this book:
1. Read this book in text, do not try to listen to it. This is a very complicated novel; it is being told in the first person about someone else telling tales of several other characters in the first person! That method made it interesting but... the names and the titles and the cities and regions all have difficult names to understand while listening. Especially when Xe Sands is narrating the female voices. For whatever reason her tone is very tough to hear well.
And Luke Daniels, whom I normally love is using five or six different accents to try to help differentiate the different characters but they were all very close in sound making it difficult to remember which character was speaking.

It took several hours of listening before I got into it, but once in, I wanted to know what happens and what does Keven Hearne do? He does the 2nd issue that took away from this book: He abruptly ends the story so you have to buy book two! I positively hate that in any series.
As a result, I cannot really recommend this book.

Huge fan of Hearne's other works! Really missed the mark with this one. I tried several times to give this a chance but just couldn't do it. If you are expecting classic Hearne, save your credit and move on.