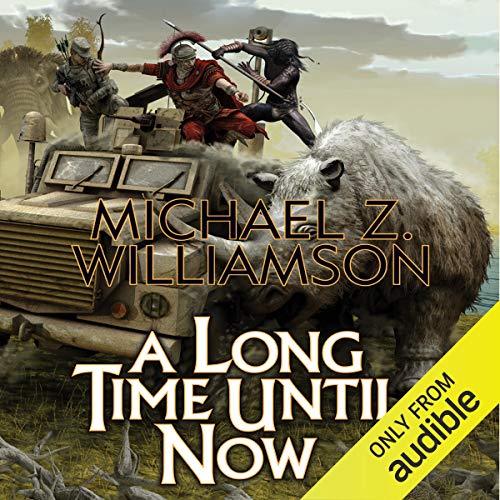 A Long Time Until Now

A Long Time Until Now

Book one in a new series from the creator of the best-selling Freehold Universe series.

A military unit is thrust back into Paleolithic times with only their guns and portable hardware. Ten soldiers on convoy in Afghanistan suddenly find themselves lost in time. Somehow they arrived in Earth's Paleolithic Asia. With no idea how they arrived or how to get back, the shock of the event is severe. They discover groups of the similarly displaced: imperial Romans, Neolithic Europeans, and a small cadre of East Indian peasants.

Despite their technological advantage, the soldiers only have 10 people and know no way home. Then two more time travelers arrive from a future far beyond the present. These time travelers may have the means to get back, but they aren't giving it up. In fact they may have a treacherous agenda of their own, one that may very well lead to the death of the displaced in a harsh and dangerous era.

Different Than Expected--But an Excellent Listen !

When an author provides a prospective reader with 22 hours of book it is a sort of a offer to enter into a contract: "You invest 22 hours of your time -- and I will make it worth your while." I went into this (based on the title and reviews) thinking it would be an epic 'Small military Unit versus Historical Bad Guys Lost in Time Story." (We have had civil war units, aircraft carriers, destroyers and infantry.) But this is NOT a bang-bang-shoot-em-up story. It is the thinking person's military. I felt as though I were reading the progeny of a cross between Desmond Morris' "Naked Ape" and either "The Martian" or "Seven Eves".

That is lofty company considering the sales of those books! But this author carries it off, albeit somewhat slowly. Compare a police procedural mystery to a cop show with car chases -- this is an 'military-anthropological procedural'. (Some reviewers have characterized "The Martian" as an engineer's recounting of the practical problems with being stranded on Mars, mixed with the single-character study of the psyche of that engineer. This is the "how to" guide to showing up 11,000 years ago matched with a study of small group dynamics.)

It is fascinating. The author clearly knows the real military, weapons and how to write. The surprise is the degree of scholarship beyond things military. It is a little gritty in day-to-day human functions...but there is nothing gratuitous. Also, the narrator is really excellent -- almost worth the listen himself. I'm doing something rare....I highly recommended this book and expect that it may become a one of those you will remember for a long time.

One final note. At least one reviewer felt that the narrative lacked pointers that would indicate which character was talking. As a paper book that might be a problem. For me, this is one of the first books that was written to be listened to. No constant "he said" or "Mike exclaimed." It added a great deal to the experience for me.

Enjoyed the hell out of this story. Author didn't try to make the narrative too dramatic or beat up his characters in a gratuitous manner.

The performance of the audiobook was masterful. The narrator kept a consistent and distinct voice for each character.

The best part was that while it was a long novel, the author resolved the story and didn't try to turn it into a multi-book series. I'm getting kind of tired of that.

Different than I expected

When I bought this book I thought I was probably getting a standard out-of-time book with shallow characters and too much action. Normally I would not buy a book like that but the idea intrigued me and I wanted to give it a try. Surprisingly this was not the book I expected, but something much more substantial and interesting.

10 soldiers are plucked from a convoy in Afghanistan along with their vehicles and transported 10-15,000 years in the past. They must try to survive as a group and as individuals and somehow find a way to make a life completely out of their own time. Along the way they find other groups, also plucked from their times, who are trying to do the same. What we have in this book is more of the day to day struggles, both physical and emotional, to build a working society than warfare between the groups and, given that they are in the pre-historic past rather than in someplace like historic Greece or Rome, there is little of what might be expected in a book like this with people trying to get ahead in what we think of as early civilization.

While I found the book to be interesting and became involved with the characters I was a bit surprised by the way the book ended and it is hard for me to see how there will be a sequel. Since this is listed as Book 1 of the Temporal Displacement Series (see the Kindle version of this book at Amazon) it is clear that there will be a sequel but it is hard to see how it will involve the same characters as in this book.

If you are looking for warfare, in-fighting and the clash of different groups this is probably not your book. If you are looking for an intelligent look at how people might have to struggle to survive in the far past this might be for you. It is well read and I was still involved with the events and the characters at the end of the 22 hours.

I tried really hard to finish this one. I spaced it out so the monotony wouldn't get to me too badly and I tried to see things through the eyes of the soldiers, but I just couldn't do it. It was just too boring.

You may be wondering how a group of U.S. soldiers being inexplicably teleported through time to the Stone Age could possibly be boring. Well, imagine that the writer forgot to introduce conflict. No degradation of order like in Lord of the Flies, no creative problem-solving against the clock like in The Martian, no sinister enemy to battle like in Terra Nova. Seriously, I was over 8 hours in and there had been no serious threats to the soldiers, aside from the distant fear of eventual backslide and a general feeling of fluctuating morale.

Most of the character development is interesting and you feel like you get to know them pretty quickly. They don't follow typical archetypes, and I appreciate that the lieutenant is neither the fresh eyed rookie, nor the super-officer that has all the solutions to every problem. Williamson makes them all human and very real. The only problem is Williamson gets kind of caught up in the realism and I get far more detail than is necessary for characters defecating and the like.

While Dennis Holland gets the job done with the voices (some of them very interesting,) the monotone of the narration amplifies the core problem of the book, that being its pacing. I'm not sure if the story was salvageable, but it feels like a military report is being read to me the entire time I'm listening.

This book might turn the corner after the first half, but I wasn't willing to stick around to find out. Maybe if you enjoy reading about the mundane chores of Army life, you will appreciate what this story has to offer, especially because of its unique setting. If you were hoping to read a story about time travel run amok, you'd be better off trying something else.

I really was surprised at how in depth this book was, great characters, good sense of team work and a fun listen. At the end of the book i found that I now really miss them and wish this had been a series, it was really good.

“A Long Time Until Now” does a great job examining how a small Army patrol would cope with suddenly being transported to Paleolithic Central Asia. The author clearly did his homework and didn’t gloss over any inconvenient details, including problems with language and the psychological impact of the displacement (almost a standard in the time travel genre). There may have been a tad more capabilities in the ten members of the team than you might find in an average patrol, but it wasn’t unbelievable. Williamson also clearly knows his military jargon. Someone without a military background would not catch a lot.

The reader did try to distinguish voices, though sometimes not as the author intended. He also made everyone sound happy too often. And finally he didn’t check with a soldier (or even an Airman) on the proper contextual pronunciation of “hooah.”

Interesting developments, all the way to the end!

Where does A Long Time Until Now rank among all the audiobooks you’ve listened to so far?

Did a good job differentiating between a myriad of characters.

Enjoyed this very much! The author did a great job juggling a number of very different characters, and showed them using skills that allowed them to survive during their time displacement. I really liked the way living conditions were discussed and addressed, as well as discussion of other historical peoples. The one thing that bugged me was one character who was always convinced she was going to be raped at any minute. That got tiring fast. I have heard rumor of a sequel, however, and would definitely listen to more of this story!

Everyday Life While Deployed to the Past

Day to day with a mixed crew of military personnel. Small challenges, petty irritations and all the complications of working closely with a crew of varied individuals. This was a comfortable book that made me feel like one of the protagonists. Thanks, Michael.

author did tons of research to get things accurate. but the hooah's bugged this veteran.

This read seemed very preachy, very little time in between long religious talk. Was not for me