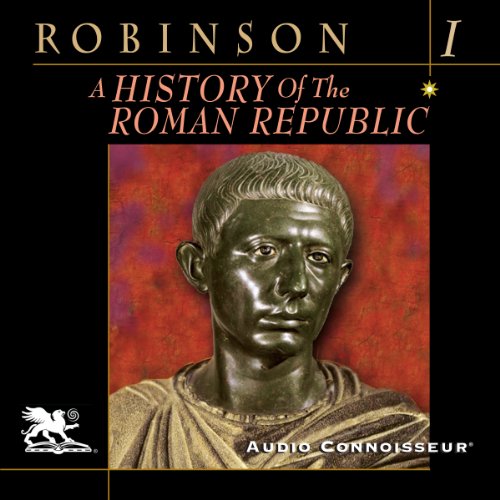 A History of the Roman Republic, Volume 1

The story of the Roman Republic is the greatest epic in human history. Seen in the long perspective of time, it seems too fantastic to be real. From its modest beginnings as a convenient fording place on the Tiber to its eventual destiny as the mistress of the Mediterranean, Rome offers a strange tale of fate, sacrifice, and indomitable willpower. The stern realities of war shaped its policies from the very beginning. And the dire emergencies Rome faced century after century meant that she was urged on by events that were usually beyond her power to control, drawing her deeper and deeper into the affairs of her neighbors and other nations. And throughout this chaos and bloodshed, Rome was ruled by a representative form of government which came to embody the ideals that Americans would embrace more than two thousand years later. But, although the legacy of Rome is seen in an essentially positive light today, the cruelty and harshness by which so many millions were debased by her rule is hard to forgive.

A History of the Roman Republic is Cyril Robinson's masterpiece. The lucid, beautifully phrased prose of this magnificent work still thrills us today. After almost a century, there is still no serious rival to this amazing work of scholarship.

Volume 1 begins in 2000 B.C. with the origin of the Latin people, their relationship to the other Italic tribes, and their long struggle to free themselves from Etruscan domination in the sixth century B.C. We follow as Rome conquers all of Italy by 250 B.C. and finally comes into conflict with the other great power of the Western Mediterranean, Carthage. After almost 50 years of warfare, Carthage and Hannibal are defeated and Rome emerges as the foremost power in the known world. Volume 1 comes to an end with Rome's reluctant entry into the Eastern Mediterranean and her contact with Hellenism in the mid-second century B.C.�a contact that will change Rome completely.

This is a fascinating look at the development of the Roman Republic. Ultimately, it says as much about the author and his time as it does about the Republic. Listen especially to his extolling of the virtues of Roman discipline and his condemnation of the vices of the oriental kingdoms and the Greeks. This is as much a look at Victorian/Edwardian England as the Roman Republic. As such, it's great read.

The narrator is superb. His accent and inflection suit the material perfectly. You, the reader, will be transported to the Explorers' Club in London at the turn of the 20th Century; the smell of tweed and pipe tobacco are palpable.

Great listening! Covers the rise of Rome, warts and all. If you recollect hilarious debate in the Life of Brian on "What have the Romans ever done for us?", this book will give the answers, as well as covering the less savoury aspects of the extraordinary epoch. On the narrator: I have a number of downloads narrated by the eccentric Mr Griffin, and have enjoyed them all.

A classic and informative history of the Roman Republic. Be warned, the author presumes the reader already has a working knowledge of classical history. A novice might be lost and confused, especially since the book doesn't follow a continuous narrative, instead jumping back and forth in time. Also be prepared for language that would be considered racist and bigoted today. The author possesses the unique brand of scholarly, dispassionate racism that was common amongst aristocratic Englishmen of the time. Still well worth listening to.

If you could sum up A History of the Roman Republic, Volume 1 in three words, what would they be?

I did not know that.

The Roman world, along with the Greeks, and the Hebrews/Christians gave the West its great cultural advantages which has been the reason for the great advancements of western society. One can not understand our world without understanding to some extent what we have inherited from the Romans.

Narration is so bad I can't get through it.

I have tried on three separate occasions to get through this, but the narrator is so awful it should be used as an insomnia cure. And I listened to War and Peace, and Brothers Karamazov in their entirety read by two of the worst readers ever to drop out of acting class, so I have a pretty high tolerance for dry boring narrators.

Snooty, scratchy, stuffy, and - the drums?

I love history books, but - by golly - I never even finished part one of this book.

Here’s the scoop: the audio quality is awful and the reader’s learned accent is right out of a stuffy members-only dinning club. There are all these weird drummers who show up between chapters, and (as I recall) there is also the sound of “solders on the march” blended into the background, when appropriate.

Someone should edit the book to make it a little more fun to read, drop the background noise and have someone read it who can make it interesting. I regret not being able to plow through it because I’m very curious to learn about the topic…. Oh well, not with this book I guess.

Okay, maybe I had this all wrong, but this is not an audio book you can listen to on long drives. Very little imagery. Reads like a college history textbook. Skip this if you want something more entertaining. I found myself day dreaming more than listening.

I grew to dislike this book very much by the end. Even though I am highly interested in the subject matter, I was put off by the narrator's pompously annoying style and the author's antiquated notions of race. What really got to me was the authors repeated insistence that the Roman "stock" was "polluted" by intermarriage with their slaves. There is evidence of impressively detailed historical research, and I understand that the book was written many years ago, but the attitudes displayed in the writing became unbearable after hours of listening.

Long on words short on information and inspiration. The most important culure in western civilization and more time is spent on empty words and aristocratic accents

An easy to understand and well told history of Rome. The narrator is very British, but it didn’t bother me much. The authors claim that Hellenism ruins the Roman republic is farfetched, he is talking about the greeks contaminating the roman blood!