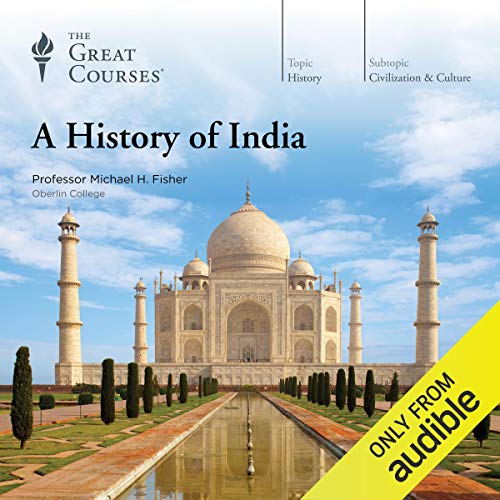 A History of India

Over 5,000 years, India has been home to a rich tapestry of peoples and cultures. Two of the world's great religions - Hinduism and Buddhism - have their origins in South Asia, and the lands east of the Indus River have long been a central hub for trade, migration, and cultural exchange. Today the subcontinent contains 20 percent of the world's population and is a thriving center for global business, making this region one of most significant economic powerhouses in the world.

Go inside this thrilling story with A History of India, a breathtaking survey of South Asia from its earliest societies along the Indus and Ganges rivers through the modern challenges of the 21st century. These 36 sweeping lectures enable you to understand the epic scope of the subcontinent's history. Perhaps the most important facet of this history is how diverse the region truly is. Roughly the size of continental Europe, India - along with its neighbors, Pakistan and Bangladesh - contains a myriad of ethnic groups, socioeconomic classes, religions, and cultural mores.

In this wide-ranging investigation, you'll:

Professor Fisher, who has traveled and taught in South Asia for decades, reveals this complex narrative with skill and compelling insights.

Almost perfect intro to the subject

History of south Asia, what a task. Learned a lot, was enjoyable. Some choices had to be made or double the time would have been needed. I regret a whole chapter (or at least 10 minutes) wasn't dedicated to Sikhism which was never properly explained.

This book covers all aspect of Indian history, very well. It is a nice voyage.

Too much anthropological pedantry

Less focus on anthropological pedantry and more focus on the richness and beauty of India and Indian history. While other lecturers for the Great Courses (Profs. Dorsey Armstrong, Kenneth Harl and Philip Daileader come to mind) make their subjects come alive through their enthusiastic storytelling, Prof. Fisher's insistence of focusing on anthropological theory and terminology (the words "emic" and "etic" must be some of the most frequently occurring; I don't think they are absent from one lecture at least until the last 3 hours of the course) instead of telling the story of India, results in a dry and uninspiring delivery. Which is truly a feat, since India has no shortage of material to draw on for an entertaining, enriching and inspiring story. I see it somewhat analogous to an Italian restaurant somehow getting basics like pizza and spaghetti bolognese wrong - it's possible...I guess..., but they'd have to try pretty hard.

Professor Michael Fisher can pronounce Pakistan, Bangladesh and Afghanistan like a local.

I was hoping to get a good immersion in India's history before an upcoming trip. Alas, while the prof clearly knows his material, his dry, sometimes halting reading of his notes made it almost impossible to listen for more than a few minutes at a time. Some of The Great Courses are presented, rather than dryly read, but this one's a real snore. I really can't say I got much from it after pushing myself through all those hours of listening.

This is the first book I've ever returned on Audible. I find the book a bit superficial and does not take the trouble of delving deep. The content is biased towards source material that is easily available. Not enough research into the golden age, the early part of the first millenium. Nor into what makes Indian civilization unique. The content seems mainly a recant of events with not much insight. The professor many a times swallows up a part of the name rather rather than take the trouble of proper pronunciation. In a country where the vedas had been passed on verbally for hundreds of years, there is special emphasis on pronunciation. Lack of attention on this front indicates insufficient research in other areas.

The content is great, thorough, and balanced. If it were a book, a professional reader would have done a bit better job. If I had purchased a book, I would be very happy with it.

This audiobook was an in-depth history of the politics and rulers of India, but included little to no history of the people of the region. Also, the narration was awkward and stilted- almost as though he was reading from text

Was interested in the history of India, but didn't like the way the author tip-toed around the issue of whether the myths mentioned were true in any real sense. Come on. Kind of clothed the issue in what seemed to be double talk about seeing the stories as an outsider vs an insider. Mythology is mythology whether it's Hindu or Christian. Despite the circumlocution, it seemed pretty clear where the author stood, and maybe in order to get the kind of access he seems to enjoy he needed to be circumspect, but none-the-less, it turned me off.

Could be told in a more exciting manner. At times it gets tedious. But the story itself is fascinating

this course was very hard to finish. I found the facts interesting, but the presentation was very dry.

This was a great introduction to india before our first visit. It was easy history so it was Neither deep nor personal. Think of it as a foundation

I am glad that I opted for this book in audible. it is a comprehensive book about Indian History and I found myself that how unaware I was of many important aspects of this great country. I would recommend this to anyone who take deep interest in knowing, talking and debating about culture and history of India. We often are biased because of lack of information. This will help in removing those biases.

Yes and no. I've started and stopped it several times because it's dull.

Less interesting than most.

He's a terrible public speaker who constantly stumbles over his own words. His pauses are unpredictable, off-putting and destructive of his instructive purpose.

I regret buying this.

If oral performance is no obstacle for you, and you're fascinated by Indian history, then download this. If you're a casual listener who isn't interested in paying good money to hear a clumsy, awkward speaker stumble over his own lecture notes, move along.

This is not a bad lecture per se, but I was looking forward to learning about Indian history. These lectures don't give an organised history that would allow one to place the interactions of the nations and peoples of India in tight historical timeline, but is more of an introduction into Indian culture with many lectures about cultural developments, literature and th lives of specific men. I was especially disappointed to see that the history of pre-Mugal India was bit like trying to tell the history of Europe until the Middle Ages by discussing the Illiad and Bible. Also, one gets the distinct impression that in the lecturer's opinion, Indian leaders throughout history have not made any blunders or mistakes at all, but were all very loveable and competent. I think I did learn quite something about India and its culture, but I really expected more from these lectures.