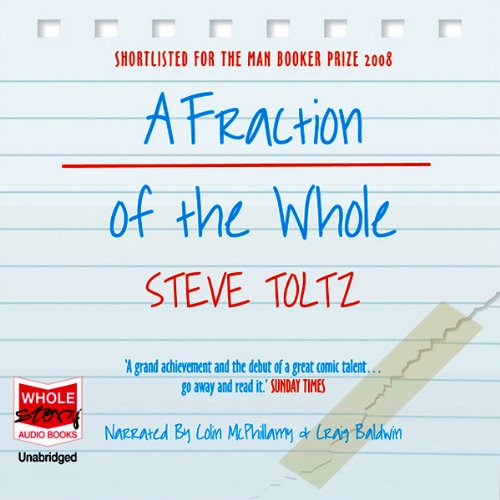 A Fraction of the Whole

Martin Dean spent his entire life analyzing absolutely everything - from the benefits of suicide to the virtues of strip clubs - and passing on his self-taught knowledge to his son, Jasper. But now that his father's dead, Jasper can fully reflect on the man who raised him in intellectual captivity, and the irony is this: theirs was a great adventure.

From his prison cell, Jasper Dean tells the unlikely story of his scheming father Martin, his crazy Uncle Terry and how the three of them upset - mostly unintentionally - an entire continent. Incorporating death, parenting (good and bad kinds), one labyrinth, first love, a handbook for criminals, a scheme to make everyone rich and an explosive suggestion box, Steve Toltz's A Fraction of the Whole is a hilarious, heartbreaking story of families and how to survive them.

Definitely a "ripping yarn". It doesn't disappoint...if you can get past the broad Australian accents of the two narrators.

The accent of the first narrator was off putting but I became used to it - and then the second narrator was introduced & it was like nails down a blackboard. I understand it's important, after all the story is Australian, but I have to admit that made me struggle.

Beyond the accents however the story is unexpected, unpredictable & deeply strange (but only in a good way). I admit I've never read a story quite like it, yet it is as compellingly Australian as Ned Kelly.

Listen to the sample & if you can live with the narrator's accent then give it a try, the story is "fanastical".

This is a unique book, brilliantly read by two fine Australian actors. Award winning for a reason...loved it

I read this one years ago & decided to revisit it. So glad I did.

There's very few books I've enjoyed as much as this one.