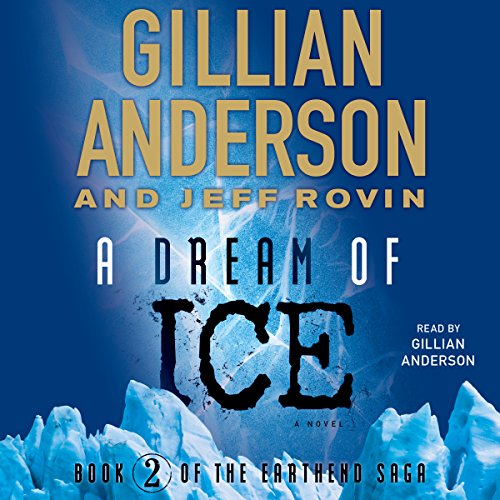 A Dream of Ice

From Gillian Anderson, star of The X-Files, and New York Times best-selling coauthor Jeff Rovin comes the second book in the thrilling paranormal series Earthend Saga that began with A Vision of Fire, which Marie Claire called "addictive!"

After uncovering a mystical link to the ancient civilization of Galderkhaan, child psychologist Caitlin O'Hara is left with strange new powers. Suddenly she can heal her young patients with her mind and see things from other places and other times. But as she learns more about her powers, she also realizes that someone is watching her, perhaps hunting her - and using her son to do it.

Meanwhile Mikel Jasso, a field agent for a mysterious research organization, is searching for Galderkhaani ruins in Antarctica. After falling down a crevasse, he discovers the entire city has been preserved under ice and that the mysterious stone artifacts he's been collecting are not as primitive as he thought. As Mikel and Caitlin work to uncover the mysteries of the Galderkhaani, they realize that the person hunting Caitlin and the stones may be connected in ways they never knew possible.

Aha! I thought as I listened to this book a second time, this is where the hoarse & whispery voice began... You have to make some type of change of voice per character.

Here are my favorites. Caitlyn of course, Ben - fabulous, & a couple of the Scottish & Hackney voices from the expedition site. More of them and less hoarse whispery would have been awesome.

I think I got a better handle on the story as well. and it brought to mind another series where airships and glass played a huge roll.

Where does A Dream of Ice rank among all the audiobooks you’ve listened to so far?

I really got into the story while listening to Book 1. This book drew me more in. I love the characters & how in depth the author's took the story.

This book would be amazing anyway, but with Ms. Anderson narrating, the story really comes to life.

I don't even know. I'm not very good with this question. The series would make good movies.

I love Gillian Anderson. I've been following her career, watching her shows for years. It was really a no brainer for me to buy her books. I was hoping I would like them. I LOVE them!!! This is one of the best series I've listened to/read. If you are a fan of this genre, you MUST listen to these books!!!

Simply captivating. The way Gillian Anderson reads this book just brings in to the story. I totally recommend this audio book.

It keeps getting better!

Complicated yet simple enough to tie the history of events together nicely! Highly recommend the series!

Book 2 of a page turner trilogy.

If you could sum up A Dream of Ice in three words, what would they be?

What was one of the most memorable moments of A Dream of Ice?

The final pages and ending.

Excellent performance in the entire trilogy.

Excellent trilogy. She be made into a series or major film.

Memorable story by former X-Files star Gillian Anderson! At times hard to follow if you are trying to multitask, but a good listen nonetheless. I know have to check & see if there is a book 3!

So Glad I Read It After All 3 Written!

I had to read all 3: boom, boom, boom. If one could be said of an audiobook, 'I couldn't put it down!' One could say it of these books.

So enjoyed listening to Gillian Anderson as narrator. I will read this book again and continue to read the complete series.

Captivating! Had to get to end.

Gillian's pacing and vocalizations create a moving script that comes alive visually. I could not put it down. The final saga cannot come soon enough.